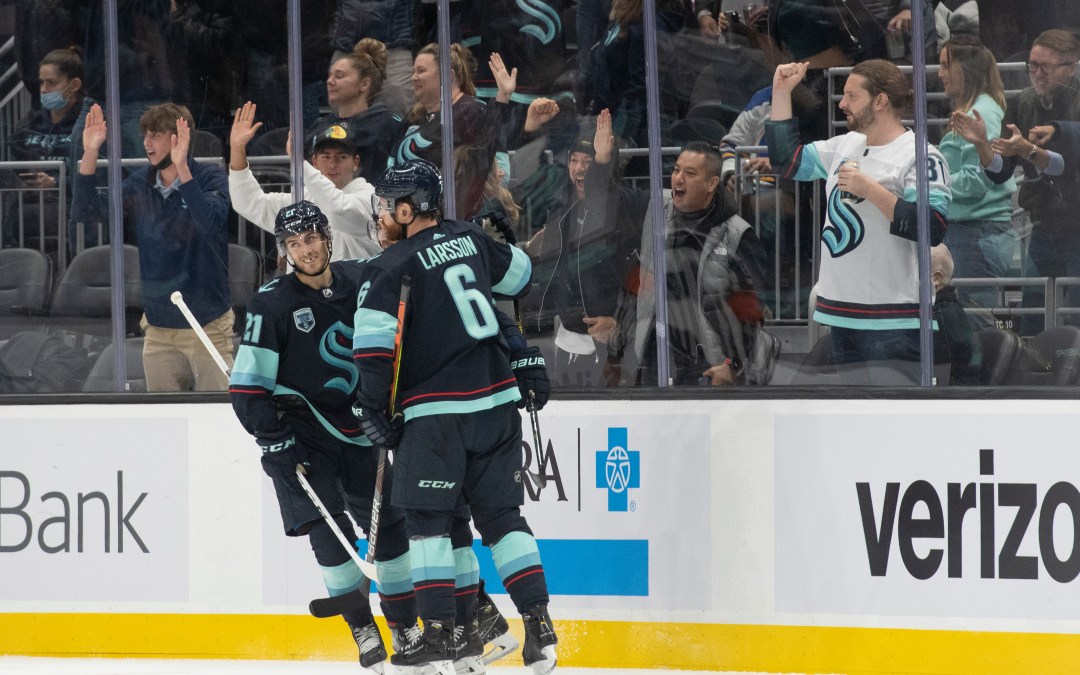 Sunday is one of those days when sports watching on the west coast proves to be far superior to other timezones. Yes, there are two championship NFL games on, but for those of us in Seattle, we get the rare pleasure of rolling out of bed and jumping right into a Seattle Kraken game, as they take on the New York Rangers at 10 a.m. Pacific.

In an already bizarre season that has had starts and stops and an ever-changing schedule, another surprise was thrown at the Kraken this weekend. Their game against the New York Islanders, which was scheduled for Saturday, got pushed back to Wednesday due to the snowstorm battering the east coast.

The latest shift in the calendar means the Kraken come into this game against the Rangers rested, as opposed to being on the second of back-to-backs, as was previously planned. It also means Philipp Grubauer will get the nod again, coming off an outstanding performance to help steal an overtime win from the Pittsburgh Penguins on Thursday.

The expedited rebuild in Manhattan is apparently done. The process for the Rangers was sped up dramatically with the uncovering of a young defenseman primed to be a perennial Norris Trophy candidate in Adam Fox (he did win the prestigious award last season). Fox was traded to the Rangers by the Carolina Hurricanes when he was still in college, a small deal at the time that has paid off in spades for New York. Fortunately for the Kraken, Fox is out Sunday with an injury.

Perhaps even more impactful, the Blueshirts appear to have found their long-term replacement for the legendary Henrik Lundqvist. Igor Shesterkin, a 26-year-old Russian in his third NHL season, very well could end up the Vezina winner this year. Shesterkin has been dominant all season long, posting a 20-5-2 record with a 2.10 goals against average and .936 save percentage.

His skills were on full display when the Rangers visited the Kraken on Halloween. That night, Shesterkin stopped 31 of 32 shots and earned a 3-1 win.

Also on display that night at Climate Pledge Arena was Chris Kreider, who scored in the first four minutes of the game with a top-shelf snipe on Grubauer. That goal was one of a whopping 31 (!!!) on the season for Kreider, which ties him for the NHL goal-scoring lead with Leon Draisaitl. It would be an understatement to say that this has been a career year for the 30-year-old Kreider. His previous high in goals for an entire season is 28, so he has already eclipsed that mark just halfway through the season.

With the rebuild happening so quickly, the Rangers are back in contention this season, currently holding down the third spot in the Metropolitan Division with a 28-13-4 record. They trail Carolina for the top spot by just two points, though the Hurricanes have four games in hand.

Lundqvist’s jersey retirement was spoiled by the Minnesota Wild on Friday. New York jumped out to an early 2-0 lead, then gave up three unanswered goals. The Rangers appeared to tie the game with :01 left on the clock, but it was waived off due to Cam Talbot’s pad being pushed into the net. That was New York’s second loss in a row, so the Blueshirts will be hungry on Sunday.

Calle Jarnkrok was a very late scratch and was replaced in the lineup by Morgan Geekie. Here’s how the lines shaped up after that change.

The Rangers drew first blood with a beautiful power-play goal. Alex Wennberg was in the penalty box after a very soft tripping call. Artemi Panarin made a perfect pass through the seam to Mika Zibanejad, who fired it past Grubauer for his 17th of the season.

Karson Kuhlman laid a big hit on Libor Hajek at center ice, but went hard into the boards and came up in a lot of pain. He sprinted to the bench with his left arm pinned to his side and quickly left the game.

Seattle had the better of the possession and outshot New York 13-5 in the opening frame, but the power-play goal by Zibanejad was the lone tally.

The Rangers extended their lead to 2-0 4:23 into the second period. Zibanejad blasted from the left hash and hit the post. The puck dropped right into the crease behind Grubauer and onto the stick of Alexis Lafreniere who scored one of the easiest goals of his young career.

The Kraken answered three minutes later when Jared McCann got his third goal in three games and brought Seattle back within one of the Rangers. On a pretty passing play off a three-on-two rush, Marcus Johansson dropped to McCann, who passed outside to Jordan Eberle. Eberle went right back to McCann in the slot, who buried it.

Seattle continued to dominate most possession metrics through two periods and had registered 25 shots against Shesterkin by the time the second horn sounded. But we saw in the Kraken game against the Predators recently that Seattle can outshoot a team while not really testing the opposing goalie. That was how it felt through 40 minutes, as Shesterkin didn’t seam to be under much duress.

The third period escalated quickly. It went from not much happening to a LOT happening in the closing minutes. With a late Kraken power play winding down and Grubauer off for an extra skater, Mark Giordano walked across the blue line to drag some Rangers defenders with him. He dished the other way to Yanni Gourde, who fired a rocket into the top corner, tying the game at 2-2 with just 1:07 left.

The tie score was short lived, however, as K’Andre Miller shot from the point and solidified a Ranger win with just 33 seconds left.

Riley Sheahan was the victim of a missed interference penalty just before Miller’s shot, but with 33 seconds left in the game, we weren’t surprised it didn’t get called.

It was a hard-luck loss for the Kraken, who probably deserved better. In all, they put 42 shots on Shesterkin, but he showed why he’s been such a star this season and got the win for New York.