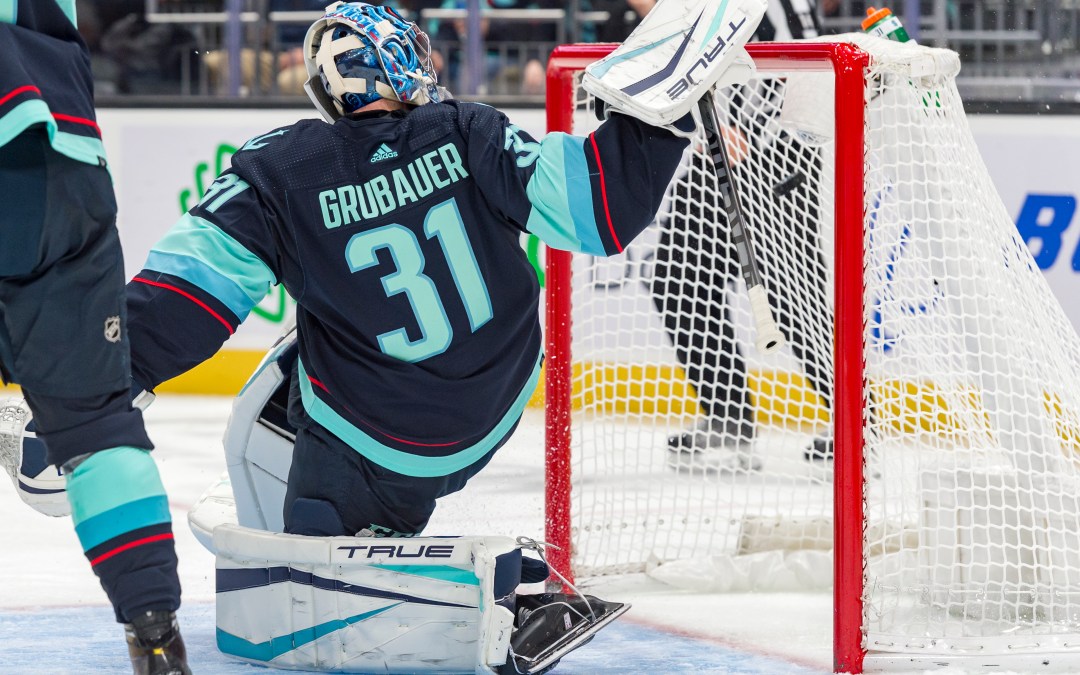 Tied at 2-2 with 34 seconds left in regulation, the New York Rangers won a faceoff back to the point and onto the stick of defenseman K’Andre Miller. Seattle Kraken forward Riley Sheahan raced out to cover Miller but was hit square in the chest by New York’s Chris Kreider. There was no interference call, and Miller fired a shot that found the net to give the Rangers a 3-2 win at Madison Square Garden Sunday.

The goal spoiled what was a dramatic comeback by Seattle.

“’I’m gonna stay away,” Seattle coach Dave Hakstol said after the game about the goal. “I’m not going to waste time on that play or how I feel about it. I think that would take away from the spotlight of how well I think our team played and how hard our team played today.”

After heavily outshooting the Rangers to the tune of 42-24, Yanni Gourde’s one-timer at 18:52 of the third period on a 6-on-4 power play tied the game at 2-2 and appeared to give the Kraken a shot at winning in overtime for the second straight game.

“Honestly, the game was right there,” Gourde said. “At least getting out of here with a point. Very unfortunate. We battled, you gotta be proud of the guys there because they battled for 60 and unfortunately, we weren’t able to come up with any points tonight, but we had the right mentality.”

Like on Oct. 31 at Climate Pledge Arena, Rangers goalie Igor Shesterkin was too much for the Kraken. In that first game between these teams, he made 31 saves to win 3-1. On Sunday, he kicked away 40 shots to win 3-2.

Jared McCann scored for the third straight game and Philipp Grubauer was sharp, making 21 saves. The Kraken were 1-for-5 on the power play.

“I thought we played a really good game throughout, and I thought we generated a lot,” Mark Giordano said. “I don’t know what the shots ended up, but we got a lot of pucks toward [Shesterkin]. You’re not gonna get more than two or three on that guy most nights, he’s a top goaltender in the league for a reason. Made a lot of big saves tonight but we executed pretty well there.”

How it played out for the Kraken

The Rangers opened the scoring at 11:46 of the first period. After quick passing on the power play they worked it to Mika Zibanejad who scored on a one-timer from the circle to the right of Grubauer.

A Zibanejad shot at 4:23 of the second period would extend the lead after the puck hit the post and was tapped in by Alexis Lafrenière to make it 2-0.

Seattle got one back from McCann at 7:17 when he finished a quick passing play with Marcus Johansson and Jordan Eberle to cut the lead to 2-1.

“It’s just a tough way to lose,” Giordano, who had an assist, said. “It was a fun game to play in. I always loved coming to this rink and playing in New York and I feel like we’ve been on the wrong end of those way too many times this year. So hopefully in the next 40 it’ll change the other way.”

The Kraken outshot New York 25-12 over the first two periods but found themselves trailing 2-1.

Injury bug bites Kraken before and during game

Calle Jarnkrok, who has been hot for Seattle, was a late scratch Sunday after taking warmups. He reportedly had an upper body injury that prevented him from playing. Morgan Geekie was inserted into the lineup without warming up and played 9:54 of the game with five shots on goal and won three of four faceoffs that he took.

In the first period, Karson Kuhlman slammed into the side boards hard, left the game, and did not return.

“This group is growing together, and I say it every day, we’ve still got a ways to go, but the signs and the results of what we’re doing are improving,” Hakstol said. “Today we played like a pretty tight hockey team, and we had some injury issues before the game, during the game, and guys just stepped forward and continue working. We’re still working towards exactly who we want to be, but again, we played a pretty good game tonight.”

+ McCann’s goal was his 18th of the season, and he is one away from his career high, set during the 2018-2019 season playing with both Florida and Pittsburgh.

+ Seattle had 42 shots on goal Sunday which is a franchise record.

+ Miller’s go-ahead goal with 34 seconds left is the second go-ahead goal the Rangers have scored in the final minute of a game, which is the most in the NHL this season.

+ The Kraken will next be in action Tuesday when they play the Boston Bruins.