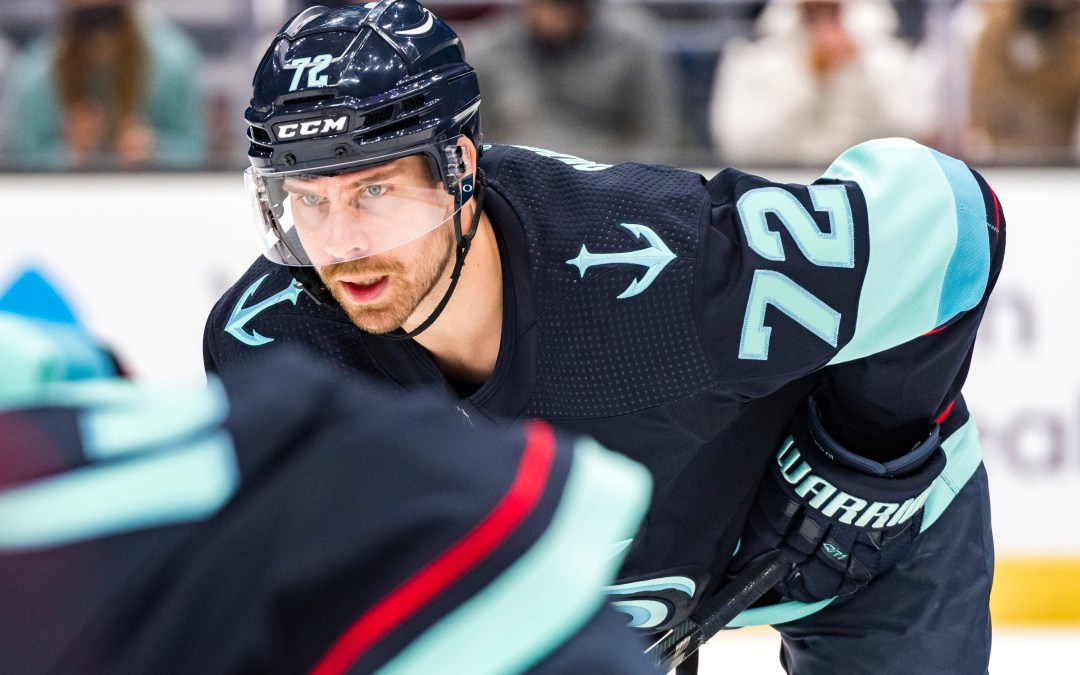 The Seattle Kraken fell 3-2 to the Boston Bruins Tuesday at TD Garden in a game that was the tale of two power play units. One was Seattle’s that ended the game 0-for-6 while the Bruins cashed in twice giving them the edge in a one-goal game.

David Pastrnak scored both the goals on the Bruins (26-14-3) power play, which is one of the best in the NHL and Linus Ullmark made 25 saves.

Joonas Donskoi scored his first of the year, Mason Appleton scored, and Chris Driedger returned to the net and kicked out 23 shots. The Kraken (14-27-4) outshot Boston 27-26.

“It’s a relief,” Donskoi said about finally scoring. “It’s been obviously a tough year and mentally it’s not easy. Nothing’s going your way and we’re losing a lot of games and I just want to help the team, and I feel like I haven’t been able to do a lot of that this year. So, it was nice to get that out of the way, but another one-goal loss, tight game… it’s frustrating.”

Seattle had six power-play chances but failed on all of them. That included a short, 38-second 5-on-3 opportunity in the second period, and overall, the Kraken managed eight shots with the man advantage.

“It was a tight game, five on five, and comes down to special teams,” Kraken coach Dave Hakstol said. “We had some opportunities on the power play that could change that. In terms of scoring earlier in the game, we weren’t able to do that.”

The loss dampened what had been a good comeback by Seattle.

Trailing 2-0 entering the third period, Donskoi cut the lead with a wrist shot through traffic 42 seconds into the period. Seattle rode that momentum and Appleton scored his fourth of the year at 7:30 of the period when he fired a loose puck through traffic to make it 2-2.

Pastrnak got the game winner on the power play at 10:49 of the third when his innocent looking shot was going wide before it hit Driedger’s glove and rebounded into the goal to make it 3-2.

“I’m just not really happy with the third I let in there, it’s pretty deflating,” Driedger said. “That one’s on me. Especially when we come back to tie in the third like that, and you know obviously, we want to get that third one.

“I honestly thought he was passing it back door there. Puck was lying up on its edge a little bit so I’m not sure if he was trying to [pass]… but whenever it hits off your glove and kind of flows back I’m never really happy with those. Obviously, he’s an elite player but there’s a lot of elite players in this league and you’ve got to stop them if you want to be good yourself.”

The Kraken had looks during a desperate 6-on-5 stretch late in the third, but Jared McCann rushed a shot where it appeared he had a wide-open net to shoot at.

Boston got on the board first with a Pastrnak one-time clapper from the circle. It came on a Bruins power play after they worked the puck low to high and Taylor Hall spotted Pastrnak open.

Seattle fumbled the puck away at 16:09 when Cale Fleury and Riley Sheahan suffered a miscommunication and left the puck in front of their own goal. Hall cleaned it up and scored to make it 2-0.

It doesn’t help that they’re missing Jaden Schwartz and Brandon Tanev, but the Kraken are not scoring enough. It’s not just the power play, they aren’t scoring at 5-on-5 either and have scored two or fewer goals in the last three games.

The lack of scoring cost them in New York and Tuesday in Boston.

To add to the misery, Seattle’s power play is mired in a 3-for-38 slide over its past 10 games.

“They did a real good job killing,” Hakstol said. “We couldn’t find shooting lanes. Several shots blocked and on a couple of our good opportunities on the power play we missed by a couple inches. We’ve got to try to take advantage of those opportunities.”

+ Cale Fleury came off the taxi squad and started Tuesday. He played on a defensive pairing with his brother Haydn to become the third pair of brothers to play on the same team this season joining Chicago’s Caleb and Seth Jones and Tampa’s Darren and Taylor Raddysh.

+ Defenseman Will Borgen was placed in the NHL’s COVID-19 protocol Tuesday morning.

+ Seattle wraps up its road trip Wednesday evening against the New York Islanders at 4 PM, Pacific.