Grubauer gets shutout, Dunn dazzles for Kraken against Islanders 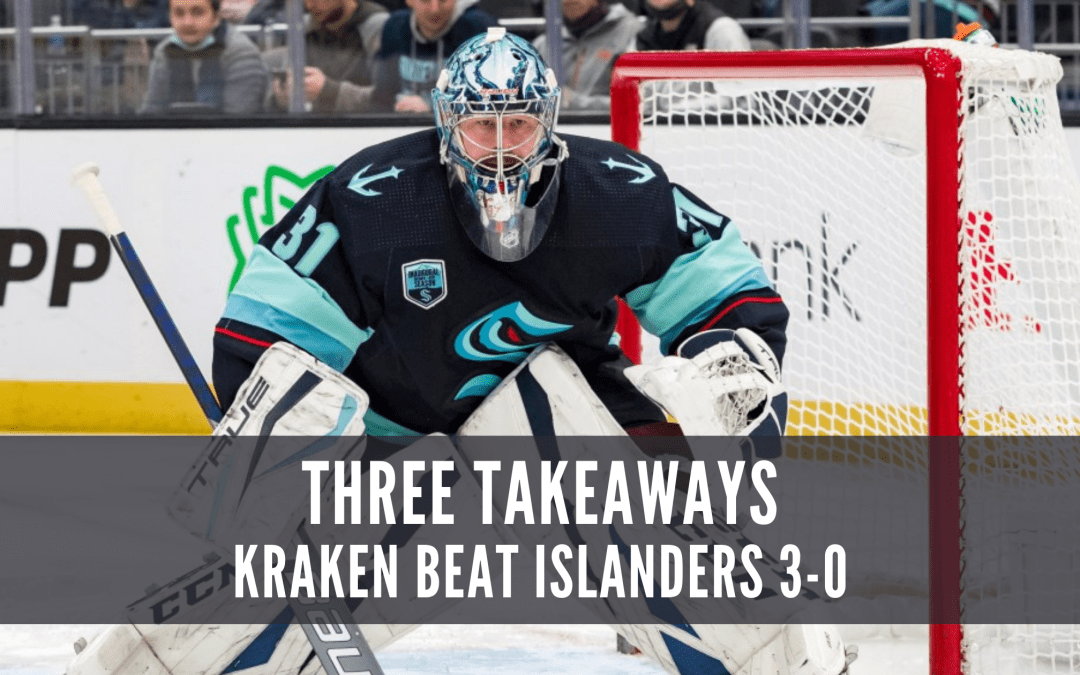 He did it! Philipp Grubauer accomplished what once seemed even more impossible than Joonas Donskoi scoring a goal for the Kraken by shutting out the New York Islanders on Wednesday for the first clean sheet in franchise history. And so, the Kraken proved on this four-game road trip that there is a first time for literally everything.

It was a tight-checking affair between two defense-first hockey teams, so Grubauer was not tested all that much. Still, considering how the early parts of this season went for the German Gentleman, it was nice for him and for Kraken fans that he continued his strong play and held the Islanders scoreless.

It was such a big deal that he got the shutout, even ESPN’s SportsCenter congratulated him via Twitter.

Here are our Three Takeaways from a 3-0 Kraken win over the Islanders.

Takeaway #1: A result for Grubauer, but an impressive defensive effort in front of him

It was awesome to see Grubauer get the first shutout out of the way, but really this win belonged to the defense in front of him. The Kraken had excellent structure throughout and only allowed 1.51 expected goals, while generating 3.1 themselves. There were very few odd-man rushes against, and only 19 shots actually got through to Grubauer.

“Great, great game from everybody,” Grubauer said. “I don’t think they had too many great chances. When you compare this game to other games we’ve played, [there were] breakaways, two-on-one’s. Today was the least scoring chances we’ve given up in a long, long time. So without the guys in front of me, there’s no chance you can [get the shutout].”

Grubauer has been really good since a lengthy COVID-related break in early January and deserved this reward. In his last seven starts he is 5-2-0 with a .922 save percentage and 2.14 goals against average.

Jared McCann’s goal streak was snapped Tuesday in Boston, after he scored in three consecutive games before that 3-2 loss. In that defeat, he had a golden opportunity to tie the score in the closing minutes and extend his streak, but he shanked a shot from an angle with a wide-open net.

On Wednesday, he got a look from an even sharper angle after Jordan Eberle performed some sorcery behind the net and got Semyon Varlamov looking the wrong way. McCann banked it off Varlamov for his fourth goal in five games.

That eventual game winner was McCann’s 19th goal of the season, tying his career high for an entire campaign with a whopping 36 games left to play. How many can he score as he prepares to negotiate for a contract extension?

Vince Dunn stole the show from McCann on Wednesday, though, burying an absolute beauty of a backhander. The shot was nice, but it was the little dipsy-doodle backhand toe drag around Anders Lee that got John Forslund to shout, “That’s hockey, baby!”

What a goal by Dunn, who is so shifty on the back end. We’re excited for his future with the Kraken.

Takeaway #3: The road trip was better than Seattle’s record indicated

We’ve thought for a long time that the Kraken are a better team than their record shows. This road trip was a great example of that. They played really good hockey on this east coast swing with consistent efforts all the way through. They beat an outstanding Pittsburgh team, were tied in the last minute with the Rangers, gave up a fluky power-play goal and went 0-for-6 themselves against Boston, and were the better team for most of the night against the Islanders.

In all, that’s a 2-2-0 record after going 3-3-0 on the homestand prior to this trip. So, it’s not the most inspiring outcome, but the boys really did play well and probably deserved better in terms of standings points than what they actually brought home.

“At this time of year, these are the kinds of games that everybody’s going to be involved in,” coach Dave Hakstol said. “You know, really, we had four in a row on this road trip. We knew that was the kind of road trip it was going to be. For the guys, it’s a good reward.”

“It started after that little COVID break we had,” Grubauer added. “We had time to work on some stuff systematically. We worked on a lot of things, which—game, day off, game, day off—you don’t usually have time to work on. So I think since that game it’s been really consistent.”

A win to close out this stretch does feel nice, and now Seattle slides into the All-Star break feeling good about the way it’s playing.

The Kraken get another week off to clear their heads and hopefully hit the ground running when they return to Climate Pledge Arena on Wednesday.