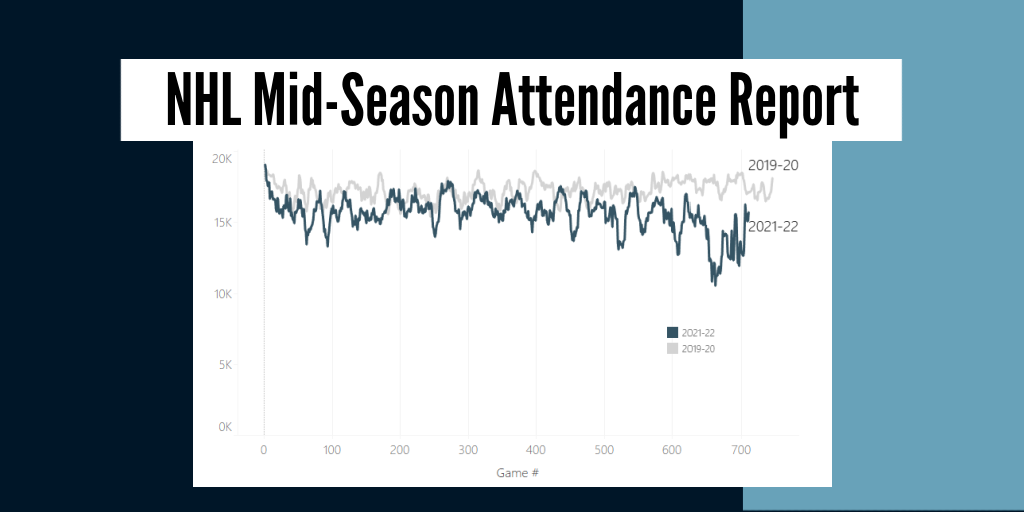 With the All-Star break upon us, we thought it would be a good time to check in on NHL attendance numbers across the league.

There are a few preconditions we need to call out before we start digging in.

The drop from 17,157 in 2019-20 to 15,780 in 2021-22 should not be surprising, as the pandemic is still surely impacting the willingness of fans to attend sporting events. We should also point out that the 15,780 includes reduced attendance figures from Canadian games in January.

Here is a look at a game-by-game moving average:

You can see the impact of the reduced capacity games over the last month with the drop in the most recent 50 games.

Here is how it looks with excluding the reduced capacity games.

Even with the reduced capacity games excluded from the data, the NHL attendance numbers are still off from 2019-20. This is mostly driven from the Omicron variant raging through North America and giving many fans pause.

The one bright spot in the team-by-team attendance figures is the New York Islanders. They opened UBS Arena this season, and the impact to their attendance is significant with a 36 percent boost compared to the 2019-20 season. In 2019-20 the Islanders split time between Barclays Center and NYCB Live/Nassau Coliseum, both of which had limited capacity and a less than ideal fan experience.

On the other side of the equation, the Sabres are down 50 percent compared to the 2019-20 season. There are plenty of reasons for the drop: team performance, the Jack Eichel situation, and the challenges for fans to cross the Canadian/US border for hockey fans living near Buffalo but in Canada.

Anaheim and San Jose are outperforming their 2019-20 performance and preseason expectation on the ice, but the fans are not turning out. It is common when teams fail to make the playoffs in multiple seasons that it takes a few seasons for fans to start filling up arenas again.

Here is a look at teams by game number of the season.

Even with some encouraging news surfacing around COVID-19 case data, it is unrealistic to expect the numbers to turn around this season while the pandemic is still a thing. Best case scenario is that the league can start the Stanley Cup playoffs with full capacity in every building.