Progress report – what the Seattle Kraken have versus what they need 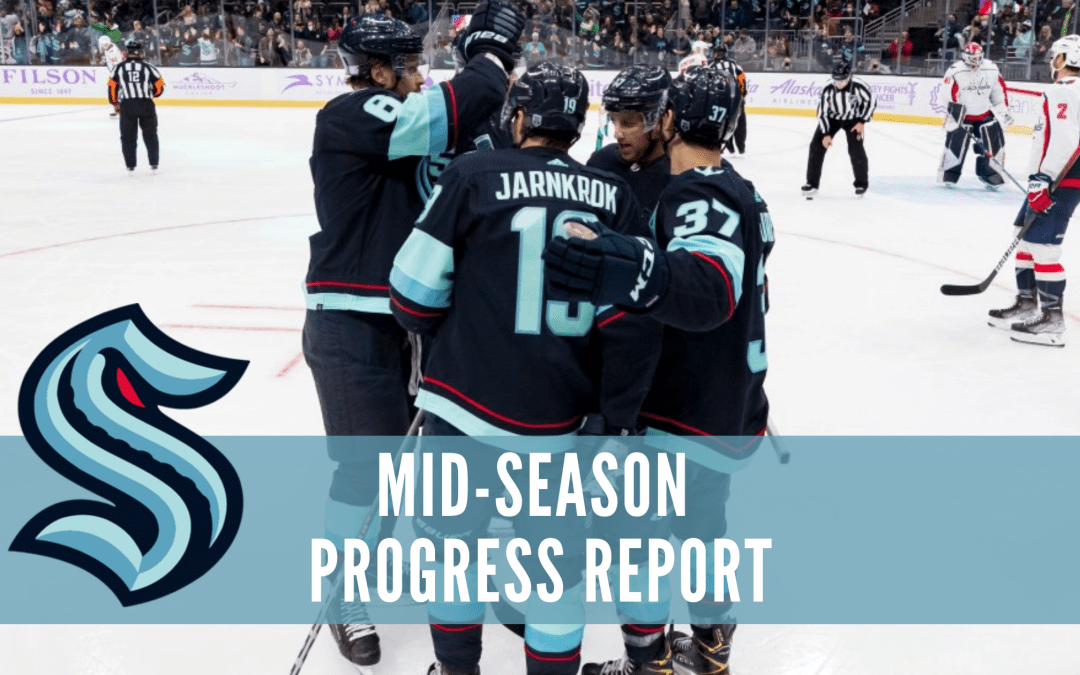 Maybe it hasn’t quite gone as well as we hoped it would for the Seattle Kraken in their first year. They are not the 2017-18 Vegas Golden Knights—not even close, in fact—and it does look like there is at least a couple-year process that will need to be endured before Seattle can actually ice a contending team. We begrudgingly accept this reality now.

Compared with the lead-up to the season, there is now a lot more clarity about what the organization does and does not have in its grasp. With the All-Star break coming to a close for the Seattle Kraken and the rest of the NHL, this feels like a good time to take stock.

What the Seattle Kraken have

We know, we know! Put down your pitchforks and your torches, folks. We are fully aware that this position has been a massive concern and one of the primary reasons for the team’s struggles this season. But both Philipp Grubauer and Chris Driedger appear to have turned a corner after a miserable first few months.

Coming in, we expected the goal crease to be a strength for this team, and we still think this will be the case in the longer term. A relatively small sample size of improved play from both netminders over the last month has reinforced this belief, and the team has followed suit by playing well in front of its goalies.

Even if they haven’t turned a corner and regress to playing the way they were both playing earlier in the campaign, Seattle’s top two netminders are signed to significant deals, so this position feels relatively set. Grubauer is under contract through 2026-27 with an average annual cap hit of $5.9 million, while Driedger is signed through 2023-24 at $3.5 million per year.

Grubauer also has a no-trade clause for the first three years and a modified NTC for the next three, so he’s not going anywhere any time soon. Driedger has a modified NTC throughout his deal, so he too has some control over where he can theoretically be traded.

We expect that these are the two goalies for this team for the foreseeable future, but there is one wrinkle to consider. Joey Daccord has played well in the AHL and has filled in admirably on a couple of occasions at the NHL level. He’s been a nice insurance policy, because he is currently waiver exempt and can be shuttled back and forth between the Kraken and the Charlotte Checkers without fear of losing him to another NHL club.

The problem is that Daccord’s waiver exemption runs out after this season. So, he will have to pass through waivers if Seattle tries to put him in the AHL at any point during the 2022-23 season. Does general manager Ron Francis want to get ahead of that issue and try to get a return for Daccord? Or does Seattle think Daccord is ready to serve as a cheaper backup to Grubauer next season? If so, maybe Driedger is the guy that gets moved. Either way, put a pin in this one, because it is something that may need addressing by the front office.

A core of solid (but not dazzling) players

The foundation is there for the Kraken. They have a group of players that does things the right way, doesn’t cheat, and battles every night, despite Seattle’s firm footing in last place in the Pacific Division.

Since the early-January break due to COVID issues, the identity of the club has revealed itself, and now Seattle is playing the way we expected from the beginning. The group makes the opposition fight for every inch of ice and is in every game, win or lose.

There are also forwards that can produce. Jared McCann has proven that he can put the puck in the net consistently and deserves a nice raise, while Jaden Schwartz and Jordan Eberle have pitched in for stretches. The Kraken have gotten contributions from guys like Yanni Gourde, Brandon Tanev, Ryan Donato, and Calle Jarnkrok as well.

Also worth noting, we really like this group of forwards, but if they could play in lower roles, they would each bring Seattle even more value. We’ll talk more about that in a bit.

Like goaltending, the Kraken entered the season expecting to have a practically impermeable blue line. It was downright leaky in the early going, though, with turnover after turnover ending up in the back of Seattle’s net.

But recent returns have been far more favorable, with Wednesday’s 3-0 shutout of the New York Islanders serving as a prime example. That night, there was almost nothing getting through to Grubauer that created much danger, and odd-man rushes were almost non-existent for New York. Of course, the Isles are a defensive team that has struggled mightily this season, but still, it was a solid defensive effort by the whole group.

In the first three months of the season, the Kraken owned just 47.53 percent of the expected goals for (xGF), meaning they were giving up more defensively than they were generating offensively. They were 24th in the league in this category during that period. Since the early-January break, however, they have generated 52.46 percent of the xGF, good for 13th in the league over that stretch.

From a personnel standpoint, the season-long rotation on the bottom pair, featuring Haydn Fleury, Will Borgen, Jeremy Lauzon, and—to a lesser extent—Carson Soucy has made for interesting storylines about who will and will not be in the lineup each game. Up until this last week, it had also meant that even as injuries and illnesses popped up for the Kraken, they hadn’t needed to look to the AHL for defensive stopgaps.

Again, one month of positive play is a relatively small sample size. It’s also possible that Mark Giordano gets moved prior to the trade deadline, which would put a serious dent in the blue line. Still, the xGF stat is a promising indicator that the early struggles were fixable and not necessarily a matter of personnel. With all that in mind, we maintain that the Kraken do, in fact, have defensive depth.

What the Seattle Kraken need

Don’t get us wrong, we love the trio of Eberle, Schwartz, and McCann, and we’re hopeful that McCann’s contract extension will be a long one. But what if Schwartz and Eberle were wings on Seattle’s second line, with McCann skating on the top group with some combination of players that features Johnny Gaudreau, Filip Forsberg, and/or Tomas Hertl?

Even one of those players would change the whole makeup of Seattle’s forward lineup and give Eberle and/or Schwartz more favorable matchups, while pushing players better suited for depth and checking roles into those positions.

We know, free agency is scary, and getting one (or two?) of the best unrestricted free agents on the market is both risky and costly. But Seattle has a lot going for it, from the cap space to the sparkling new facilities, so luring top talent is a legitimate possibility.

Recognizing the risks, landing a top free agent or two this offseason would be the fastest way to jumpstart this organization on its path to contention.

The times that Seattle has had to call up help from the AHL this season have revealed just how shallow its current pool of players is. This should marginally improve next season, as the Kraken will have their own AHL affiliate with the inception of the Coachella Valley Firebirds. They’re likely going to have to sign a bunch of career AHLers and tweeners to fill out the inaugural roster, though, as they still won’t have much of a prospect cupboard from which to draw.

That brings us to the next obvious need for Seattle…

Seattle’s top-three picks in the 2021 NHL Entry Draft are all looking like good choices, based on early returns.

Matty Beniers is having another excellent season at Michigan with 36 points in 28 games and is now in China to compete in the Olympics.

Ryker Evans had a great training camp with the Kraken and has 43 points in 39 games on the blue line for the Regina Pats of the WHL. He scored a banger on Sunday, by the way.

Ryan Winterton has returned from a long injury hiatus and has 16 points in just eight games for the OHL’s Hamilton Bulldogs.

So, there are some players there, but three guys under 20 years old is not a prospect pool. Getting another lottery pick in the 2022 draft would certainly help, but it may behoove the organization to acquire some young, waiver-exempt prospects that are further along in the development process.

The Kraken are in a decent spot

While there are some glaring holes in the existing NHL roster and throughout the organization, Seattle has done a good job of building a foundation for the future. There’s plenty of salary cap flexibility, and the current group is creating an identity as a team that is hard to play against and skates with every team in the NHL.

Sure, some more wins would be nice, but at this point, the best-case scenario for this inaugural season is to win enough to keep the fans interested down the stretch, while also losing enough to stay in contention for a top-three pick in the 2022 draft.

Regardless of if Seattle lands another top pick, there is a pathway to success in the relative near future for this fledgling franchise.

What say you, Kraken fans? What else is missing?