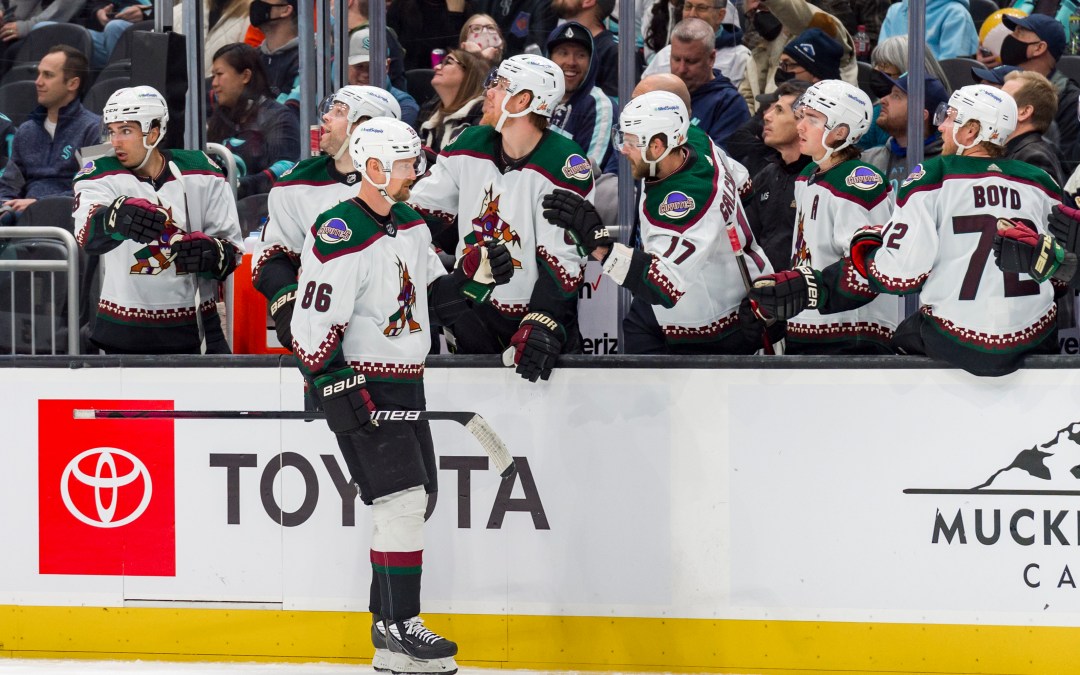 With the way Seattle played on its road trip prior to the All-Star break, we were hopeful it would pick up where it left off on Wednesday, bringing a relentless attack and suffocating defensive structure in front of outstanding goaltending. The Kraken looked rusty and at times sloppy against the Coyotes, though, and deserved the loss they were ultimately handed (although 5-2 was a bit harsh, being that Arizona got two empty-net goals).

Facing a bad team that was on the second of back-to-backs with a goalie playing his second game in two nights, the Kraken had a lot of advantages on Wednesday. But netminder Karel Vejmelka played well enough to win for the Coyotes, and the Kraken didn’t finish on enough of their scoring chances.

Here are our three takeaways from an uninspiring Seattle loss to Arizona.

For four months, the biggest “can’t buy a goal” storyline was wholly owned by Joonas Donskoi, who took 44 games to finally find the back of the net. Seattle’s first All-Star, Jordan Eberle, has now taken over that narrative and is in the midst of a miserable scoring slump that dates all the way back to Dec. 6.

We’ve heard players say a number of times that they don’t worry too much about not scoring as long as they’re getting chances, and the chances have been plentiful for Eberle. During the second period on Wednesday, it looked like he was about to break through.

Marcus Johansson made a lovely pass off a two-on-one rush right onto Eberle’s tape at the top of the Arizona goalcrease. Eberle did everything right and even managed to elevate the puck, but Vejmelka went right to left and stole the sure goal away from the snakebitten scorer.

Eberle looked up to the rafters in disbelief after the highway robbery by Vejmelka, who also made a similar save on Yanni Gourde in the first period. In all, Vejmelka had 34 saves on the night, but the one on Eberle was most memorable.

Eberle did get a meaningless goal in the All-Star Game, and we thought maybe that goal plus the break would do him some good. But getting stonewalled like that in his first game back had to be tough on the psyche.

He is an awesome offensive player. He’ll score again soon, and then a lot more goals will come right after that.

Takeaway #2: None of the winning elements were there for Kraken against Coyotes

On a number of occasions, we’ve written and talked about the winning formula for Seattle being (1.) strong goaltending, (2.) air-tight defensive structure, and (3.) timely scoring.

All three of those were… sort of… there… on Wednesday, but none of the three was fully baked. For example, Philipp Grubauer played decently, and you can’t really fault him for Nick Schmaltz’s first goal, which came at 14:51 of the second period. Schmaltz snuck behind the Kraken defense while Seattle’s forwards were playing Hot Potato in the Arizona end. Alex Galchenyuk hit Schmaltz with a stretch pass that sent him on a partial breakaway. Schmaltz was in alone with Grubauer, so again, you can’t really fault Grubauer for giving up the goal, but he also sort of whiffed with his glove on what looked like a stoppable shot.

Defensively, there weren’t many odd-man rushes allowed, so the structure was ok, but there were some horrendous turnovers. Most notably, Adam Larsson tried to one-touch a breakout pass between his legs in the opening minutes. The pass got broken up and led to Phil Kessel toying with Grubauer and giving Arizona an early 1-0 lead.

“We ended up with a D on the wall that was trying to bump it out to our centerman that was already above the play,” coach Dave Hakstol said of the botched breakout. “In reality, on each of the three goals tonight, we just weren’t sharp.”

As for timely scoring, the Kraken did get a couple goals, but they were too little, too late, as Arizona did a better job of capitalizing on its chances from start to finish.

Aside from Kessel (who played a really good game, by the way), Clayton Keller, and Jacob Chychrun, the Arizona Coyotes must lead the league in having players that make you say, “Oh, yeah! That guy!”

On Wednesday, several players that fit that category factored into the victory. Alex Galchenyuk had a goal and an assist, Loui Eriksson had an assist, Ryan Dzingel had an assist, and Anton Stralman had the eventual game winner.

That Stralman goal was a backbreaker, and it was yet another instance of Seattle quickly conceding goals immediately after scoring at the other end. Colin Blackwell got Seattle on the board just 16 seconds into the third period, but it only took 1:36 for the Coyotes to answer and regain their two-goal lead.

Dzingel shot from the point, and Haydn Fleury blocked it in the slot. The puck pinballed right onto the stick of Stralman, who made a move to his backhand. Grubauer couldn’t track Stralman through traffic, and by the time he figured out where the puck was, Stralman had already beaten him.

What did we think when Stralman scored? Oh yeah! That guy!

Hakstol had some more profound thoughts about the goal, however. “In reality, we gave one back. We gave one back right away,” he said. “It came off a failed breakout. We had a good clean breakout that the opportunity was there to make one more play and get up ice, and we didn’t do that. That led to the play in the defensive zone.”

Still, we remain hung up on how many players surprised us by being in Arizona’s lineup. More examples that did not have points but reminded us they were still around included Andrew Ladd, Antoine Roussel, and Shayne Gostisbehere.

Did you just say to yourself, “Oh yeah! Those guys!” after reading those names? If so, that is the correct response. Those guys beat the Kraken on Wednesday for the second time this season, and that stings.