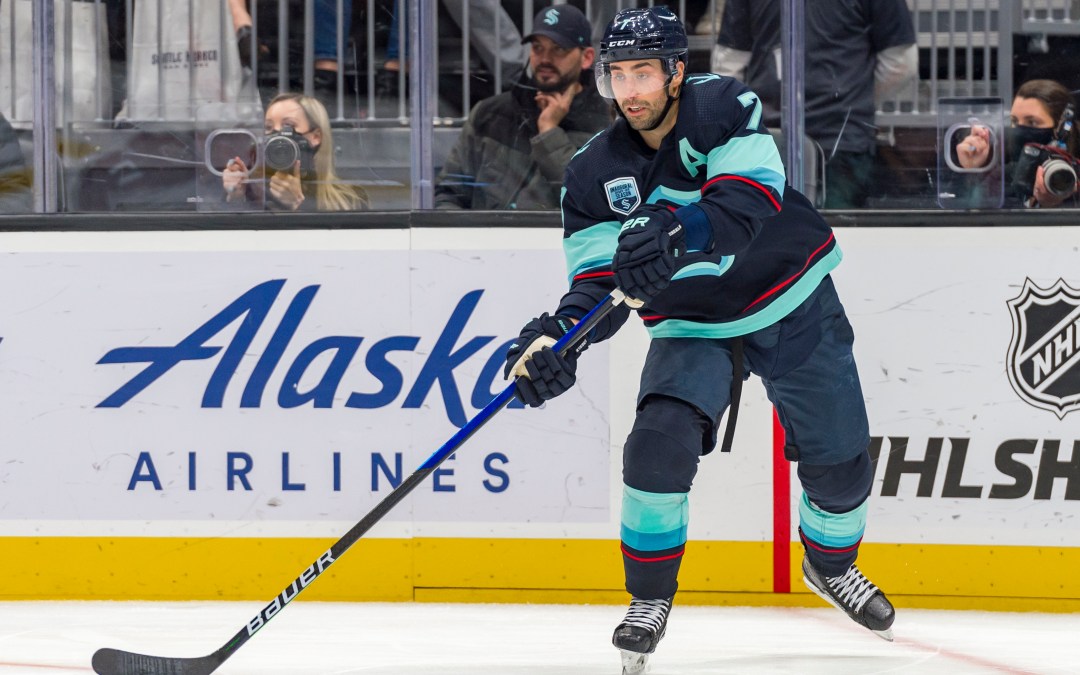 Jordan Eberle broke a 22-game goalless drought with one that mattered Friday at the Honda Center in Anaheim. It was Eberle’s goal late in the third period that vaulted the Kraken to a 4-3 win against the Ducks.

Dec. 6 was the last time he scored and it felt longer than that. But at 18:18 of the third period and with the score tied, Eberle took a perfect back-hand saucer pass from Riley Sheahan and scored bar-down for what would be the game winner.

“I just yelled at [Sheahan] to try and let him know I was over there, and he made a great play and just tried to find a space up top,” Eberle said. “Definitely one of the longer slumps of my career, probably is the longest. I’ve played in this league a long time and you’re gonna have times where the puck’s not going in. But, especially this one, I felt like every night I was getting three or four and hitting crossbars and getting Grade A’s, getting robbed. Eventually they go in and then they always seem to come in bunches.”

It was a win against a Western Conference playoff contender and wiped some of the bad taste away from Wednesday’s 5-2 loss at home to the Arizona Coyotes.

“Biggest thing, we got back to our competitiveness,” Kraken coach Dave Hakstol said. “That was one of the big things that we talked about coming into today’s game coming off the first one back after the break.”

Isac Lundestrom scored twice, and John Gibson stopped 23 shots for the Ducks (23-17-9) who had not played since Jan. 31.

How it played out for the Kraken against the Ducks

Donato got Seattle on the board 2:00 into the first period to make it 1-0 with a one-timer from the left circle. Newly acquired Austin Czarnik picked up an assist on the goal for his first point as a member of the Kraken.

“I always pray that [goals] come,” Donato, who ended his own lengthy drought, said. “They come in bunches. Some guys are streaky, and they go a couple of games without a goal. But then they put two or three in and then they’re right back in it. So, for me, I just try to stay levelheaded and not really worry about that. Try and do the small things right and I know that those will come.”

The Kraken gave up a response goal 12 seconds later, however, when Lundestrom scored to tie the game at 1-1.

Gourde won a puck battle along the boards at 14:41 and made a cross-ice pass to a pinching Vince Dunn who’s top-shelf shot made it 2-1.

The Ducks evened the game up 2-2 at 5:34 of the second period when Lundestrom was allowed to park in the crease while three Kraken defenders surrounded him and watched.

Anaheim took its first lead, 3-2, three minutes later when a power-play point shot off of Rickard Rakell’s stick found its way past Driedger.

Kraken got better as game wore on

Seattle ended the first period up 2-1, which was in many ways thanks to Driedger making 10 saves. Anaheim owned the possession numbers early, with 74 percent of all shot quality in the first period. It was more of the same in the second with the Ducks owning 63 percent of the quality.

“They pressed hard in the first. I thought we did a good job of finding a way to be up after one,” Eberle said. “Then obviously fighting back. It’s just a big road win.”

The Kraken turned things around in the third, however.

Seattle had 51.97 percent of all shot quality in the final frame and held the Ducks to one shot on goal over the final 13 minutes of the game.

“In the first half we just didn’t handle their pressure and their speed as well as we needed to,” Hakstol said. “We were able to grind through it and push back at the right times, make plays at the right times and come up with key plays, so that was obviously real positive for us.”

Was there divine intervention for the Kraken?

“It’s funny, I have a story,” Donato said when asked about Eberle’s game winner.

Donato went on to detail how he and Eberle were talking during the second intermission, sharing their disbelief they hadn’t scored. They commiserated about all the chances they had that didn’t end up in goals.

In Donato’s stall was a rosary that his dad had given him, and he suggested Eberle touch it and say a little prayer. Eberle obliged after the second period.

“And then he scores in the third, he looked at me he’s like ‘that’s insane,’” Donato said. “I was happy to see him score and I’m not saying that’s the reason, but I think that definitely helped.”

+ Donato scored for the first time since Jan. 17.

+ Morgan Geekie had an assist on Donato’s first goal for his first point since Jan. 20.

+ The Kraken next play Monday when they host the Toronto Maple Leafs at Climate Pledge Arena.