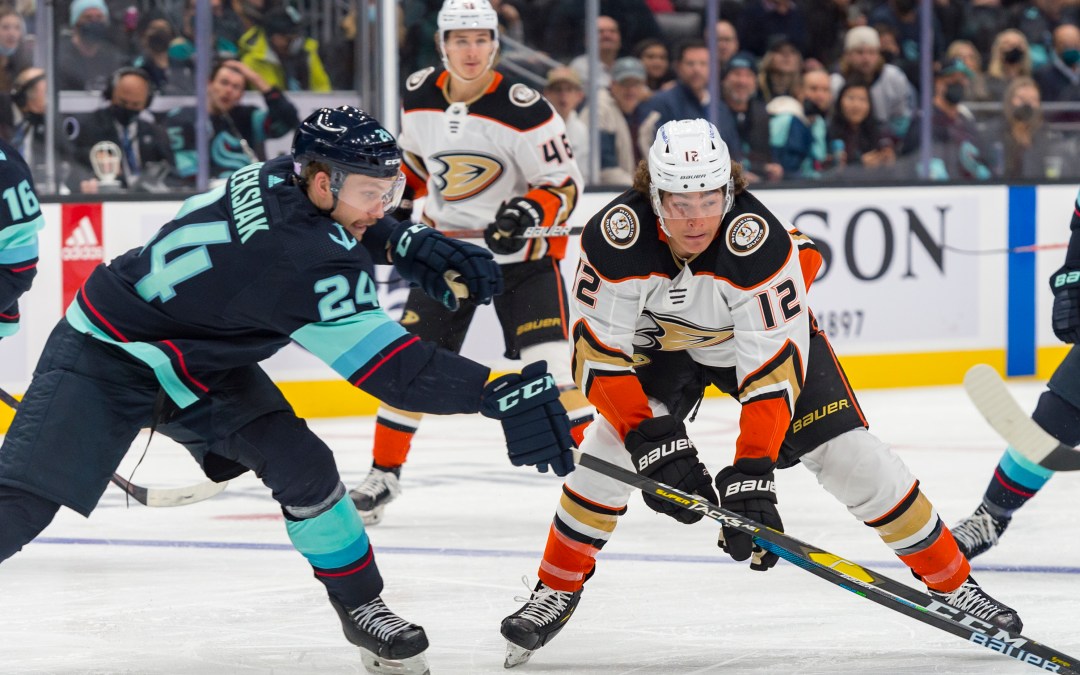 Seattle underwhelmed in its return from the All-Star break on Wednesday with a 5-2 home loss to a bad Arizona Coyotes team. On Friday, the Kraken will try to get things going back in the right direction against the Anaheim Ducks, a team that has already beaten them twice this season.

The Ducks are fourth in the Pacific Division with 55 points. They have not played a game since Jan. 31 when they lost 2-1 in overtime to the Red Wings, so perhaps Seattle can catch ’em before the rust comes off.

Coach Dave Hakstol gets one of his top blueliners back in Jamie Oleksiak, so that should be a nice boost for Seattle defensively. The Big Rig missed nine games with a lower body injury… but… also with non-COVID illness for part of it? Maybe? His status was confusing because it switched from illness to injury. We asked Oleksiak about his maladies on Thursday, but he said he didn’t want to get into it. Regardless of the cause, fans should be happy he is back.

There’s also a chance we will see newly acquired Austin Czarnik for the first time, though Hakstol was non-committal on that front both Thursday and Friday. The Kraken claimed Czarnik off waivers from the New York Islanders earlier this week. The relatively small 29-year-old forward showed good speed in practice on Thursday and could fill the depth role that was previously being held by Karson Kuhlman before he got injured.

Czarnik has 136 career NHL games under his belt with 15 goals and 28 assists spanning six seasons. In 2021-22 he played 11 games with New York and posted five points, plus 20 games with the AHL Bridgeport where he posted 15 points. Czarnik had some great AHL seasons for the Providence Bruins, scoring as many as 69 points in 2017-18. That was coincidentally Jay Leach’s first season at the helm of the P-Bruins.

Chris Driedger will get the nod in net for the Kraken against the Ducks. He has strung together several nice games in a row, but with minimal offensive support from his mates in those games, he has not gotten a victory since Dec. 14.

We expect Driedger to debut his new Vaughn pads for this contest.

This is a bit of a crapshoot and is based on the lines from Thursday’s practice. Czarnik seemed to have a regular spot, so we *think* he draws in, while Joonas Donskoi and Mason Appleton were rotating. Donskoi did get scratched once this season, so he’s our guess for who comes out. However, Hakstol also indicated Friday morning that there were some injury issues that could cause more changes. UPDATE: Marcus Johansson is out, so Donskoi is in. Here’s the lineup.

This game got off to a roaring start. Just two minutes into his first game with the Kraken, Czarnik made a beautiful cross-ice pass to Ryan Donato, who blasted it home to make it 1-0.

Then Oleksiak, in his first game since Jan. 17, dropped the gloves with Nicolas Deslaurier. Deslaurier acted like a real weenie after.

Seconds after THAT, the Ducks evened the score at 1-1 when Isac Lundestrom scored off a broken play.

That score was also short-lived, though, as Yanni Gourde found a pinching Vince Dunn with a perfect pass at the bottom of the left circle. Dunn fired it past John Gibson at 14:41, to give the Kraken back a lead.

That was an eventful first period. The Ducks had the better of the chances, and registered 71 percent of the expected goals for, but hockey is a chaotic sport. So, the Kraken took a lead to the room.

We were exhausted from trying to keep up here, so we welcomed the intermission.

The Ducks got two goal in the first 10 minutes of the second period. Derek Grant made a nice one-handed pass to Lundestrom, who put it past Driedger for his second of the game.

Then with Gourde in the penalty box, Rickard Rakell took a wristshot from the point that found its way through traffic and put the Ducks in the lead for the first time.

Donato struck for the second time at 13:35. Gourde picked up a loose puck on the right halfwall after a fortuitous bounce off the ref. Gourde quickly found Donato in the top of the slot. With the puck on end, Donato did not hesitate and fired a knucklepuck off the post and in.

It was ironic that Donato would use the knucklepuck against the Ducks, the team that created it in D2: The Mighty Ducks, but it was effective nonetheless.

The period ended with the score tied 3-3.

It was a largely uneventful third period until the final two minutes. And just when you thought Jordan Eberle might never score another goal, he popped a beautiful Riley Sheahan pass over John Gibson to give Seattle a 4-3 lead with 1:43 left.

What a win! Never a doubt!

Check back often, as we will update this article throughout the game.