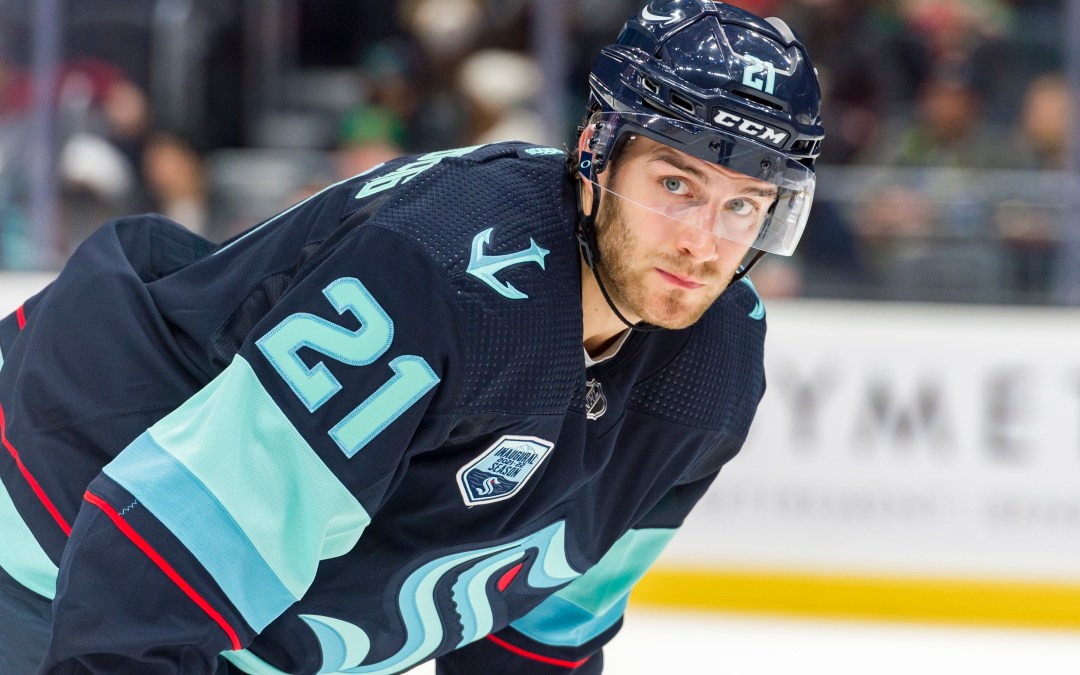 That one was pretty ugly. Coming into this game against the Maple Leafs, we were somewhat hopeful that—although they were overmatched on paper—the Kraken might build on their exciting 4-3 win over the Ducks on Friday. Instead, Seattle laid an egg, and Toronto leaned on its special teams to salvage its three-game road trip.

Nothing went right for the Kraken, and in the end, it was one of the more miserable losses we’ve seen this season. Here are our Three Takeaways from a 6-2 Kraken defeat to the Maple Leafs.

Takeaway #1: Kraken and Grubauer victims (and beneficiaries) of weird bounces

The opening Toronto score came just 3:56 into the game, a very typical timeframe for Seattle to fall behind. That one was a good, clean goal by Alex Kerfoot, but the subsequent three goals, including the one Calle Jarnkrok scored for Seattle, were results of odd bounces.

First, Willie Nylander tried to cycle a puck low into his own zone to regroup, but it hit the referee along the halfwall. Mason Appleton picked up the loose puck, which was just sitting there for the taking. He passed to the slot for Jarnkrok who scored his ninth goal of the season to make it 1-1.

The tie score lasted just 1:59, as the Kraken turned to its other greatest hit, giving up a goal right after scoring. Michael Bunting tried to poke a loose puck past Vince Dunn in the slot, but it ricocheted off Dunn’s skate and oddly seemed to pick up speed as it turned right into Seattle’s net.

Then three minutes after that bad bounce, with the Leafs on the power play, Bunting redirected a Jason Spezza slap pass and looked to be sending it wide of the net by several feet. But it again took a carom off Ondrej Kase’s skate and slipped by Grubauer, effectively ending the Kraken netminder’s night after he officially gave up three goals on just 11 shots. Bad bounces or not, that’s a stat line that will typically land you on the bench.

“Mostly just trying to change a little bit of the momentum at that point in time,” coach Dave Hakstol said of his decision to pull Grubauer. “We were in a hole and you’re at a point where you give up another one and now you’re in a real deep hole. So really just wanted to change the momentum and try to push the other way.”

The move didn’t necessarily hurt the Kraken, but it didn’t work either, as Chris Driedger also had a tough go in relief and gave up three goals on 14 shots.

Bounces happen during the course of a hockey game, but you need to manage through them. Seattle did not do nearly enough to overcome those bounces on Monday, and in the end looked overmatched against an elite offensive team. That is something we really haven’t said on too many occasions this season.

Speaking of looking overmatched, there’s a bit of irony in the Kraken scoring a power-play goal against the Maple Leafs. That’s because it came in a game where the special teams units of the two squads looked lightyears apart from one another.

Aside from the power-play goal off Kase’s skate in the first period, Mitch Marner scored another goal with the man advantage in the second. Auston Matthews wired a shot from the left side, which John Tavares tipped on goal. Driedger kicked it away and right to Alex Wennberg, but Wennberg mishandled it and pushed it onto the tape of Marner. Marner had plenty of time to decide where to shoot, and he helped the best power play in the league improve to a 31.5 percent success rate on the season.

The Leafs have so many weapons, it’s almost unfair when they get a power play. Seattle actually did a decent job of staying out of the box and only took two penalties on the night, but Toronto converted on both of its opportunities.

On the other hand, the Kraken power play looked paltry despite Jared McCann’s third-period tally. Not only did they fail to score on their first three opportunities, the Kraken actually gave up a short-handed goal to David Kampf. Marner made a great play to poke the puck past Eberle at the Toronto blue line, then flew in on a breakaway. He surprised everyone in the building by dropping the puck for Kampf, who had an easy tap-in.

“We couldn’t get a whole lot going on our power play,” Hakstol said. “It was nice that we got one finally at the end. Hopefully that gives us a little bit of momentum and loosens us up a little bit because we looked tight on the power play.” And as for the penalty kill? “They went two-for-two, so obviously, we didn’t get the job done.”

Even with McCann squeaking one through Jack Campbell’s pads and just over the line in garbage time, Seattle still has just four power-play goals in the last month, while Toronto has 12 over that period.

On a night of few positives for the Kraken, McCann’s goal—which required video review to prove it had fully crossed the line—was a milestone marker. Against the team that traded for him just prior to the Expansion Draft and then exposed him to Seattle, McCann reached the 20-goal mark. That is a career high for the sharp shooter and a good round number to hit at this stage in the season.

“He’s growing his game,” Hakstol said of McCann. “We put him in the middle, asking him to play a significant role… He’s a shooter. He can beat goaltenders one-on-one… but along with that, the responsibility as a centerman in one of those top-two roles is an area of growth for him and he’s working hard at that.”

McCann wasn’t in a great mood after the bad loss, but he did share some thoughts on what it has meant to him to get an expanded opportunity in Seattle. “It’s obviously very special. It’s something that I’ve worked very hard for especially in the summertime. It’s a dream come true always to be in the NHL, so I’m just tying to take advantage of it.”