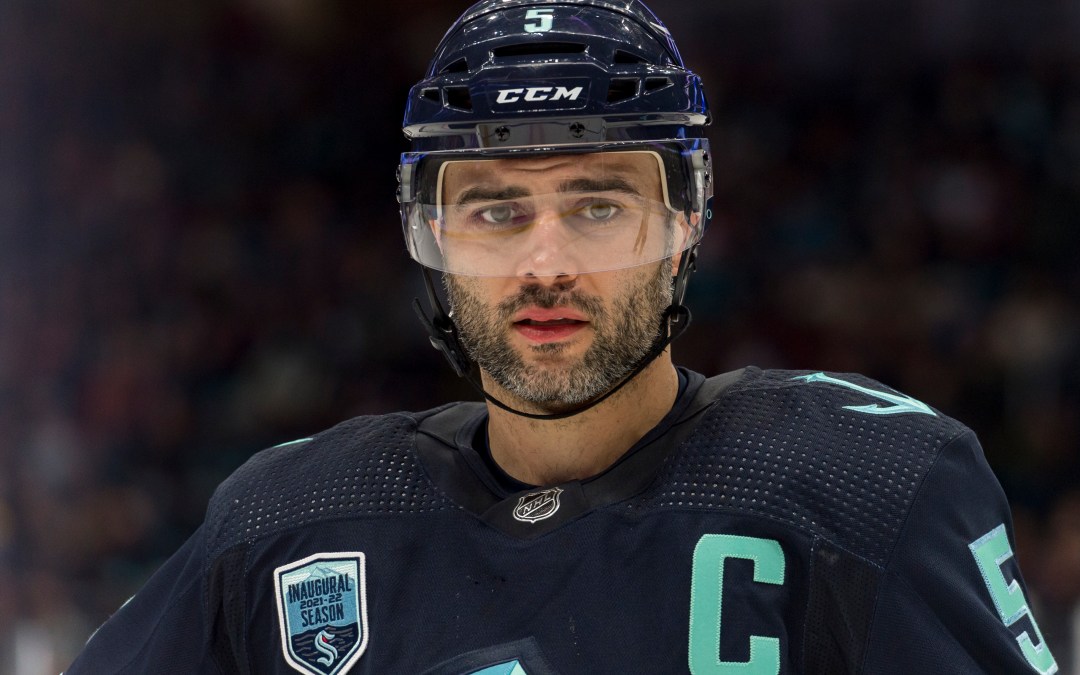 It’s Mark Giordano night! The beloved former Calgary Flames captain, who played 15 seasons with that franchise, makes his regular-season Kraken debut at Scotiabank Saddledome on Saturday. The (hopefully) triumphant return comes at a time when his old mates are on an absolute tear, winning eight straight games and dismantling opponents over that stretch. They’re winning every game handily right now, with their last five straight victories coming by a margin of at least three goals.

The Kraken, meanwhile, have lost five of their last seven, so this feels like a perfect night for them to shock the hockey world and knock off the first-place Flames.

Giordano practically owns the city of Calgary, and even now, he gets love from fans around town. “I went out with a few guys for dinner [on Friday, so there were] a couple people saying good job to the boys,” he said Saturday morning. “I had to remind them that I wasn’t on the team anymore.”

He will certainly get a heartfelt ovation at some point during this game.

Interestingly, Giordano has had some of his best offensive performances for the Kraken against the Flames in both pre- and regular-season play. He scored in a 4-3 shootout win in Calgary during the pre-season. Then when Calgary visited Climate Pledge Arena on Dec. 30 for the first official meeting between these teams, Giordano had a goal and two assists. The Flames did come out on top that night with a 6-4 win.

The Kraken captain did not leave Calgary by choice, and the timing has to sting a bit even now, being that the Flames are putting everything together. “I was here for so long, so to see these guys—they’re having a great year—you know, there’s mixed emotions, both ways. But I’m seeing some of the individual performances they’re having this year, it’s pretty cool, and a lot of those guys are my close friends, so happy to see that.”

The Flames are… hot

Even beyond this eight-game winning streak, the Calgary Flames are the real deal this season and have earned their spot atop the Pacific Division. They get outstanding goaltending from Jacob Markstrom, who will start on Saturday. Their top line of Johnny Gaudreau, Elias Lindholm, and Matthew Tkachuk has 64 combined goals on the season, while Andrew Mangiapane has erupted for 25 goals.

Calgary also added Tyler Toffoli last week in a big-time trade that brought the well-rounded forward over from Montreal.

This is a good, balanced team, that has taken huge steps under coach Darryl Sutter. It looks poised for a division title and a deep playoff run.

After returning from a lower-body injury in Seattle’s painful 5-3 loss to the Jets on Thursday, Carson Soucy—who played 14:12 in that game—will come back out of the lineup Saturday. Haydn Fleury will replace him on the third defense pairing. That’s an interesting decision by coach Dave Hakstol, because Soucy had earned a full-time role prior to his injury.

Up front, Morgan Geekie will sit, while Austin Czarnik will draw back in for his third game with the Kraken.

The Flames put together a heart-warming pre-game presentation for Giordano, which brought some fans in the building to actual tears (seriously, we saw them).

We tried to warn the Kraken about the top line of the Flames, but they apparently didn’t listen, as it took Tkachuk all of 3:02 to put Calgary ahead. Lindholm won a puck battle against Jared McCann and Vince Dunn below the goal line, then found Tkachuk in front, who was oddly forgotten about by the rest of the Kraken.

Just like that, the Kraken found themselves in familiar territory, trailing 1-0 in the first few minutes.

The Kraken answered at 12:26, leveling the score at 1-1. Calle Jarnkrok got his 10th goal of the season when Noah Hanifin handed him a beautiful gift with an errant between-the-legs pass right on the doorstep. Jarnkrok made no mistake.

Although the goal was officially unassisted, Hanifin probably could have gotten a point on that one.

Philipp Grubauer made a phenomenal save on Andrew Mangiapane in the closing minutes of the period. Hanifin, trying to make up for his mistake a few minutes earlier, passed to Mangiapane in the slot. Grubauer looked dead to rights, but he kicked the left pad out and stole a sure goal away from the high-scoring winger.

The period ended with the score tied 1-1.

Markstrom got a highlight reel save of his own early in the second period. Off a two-on-one rush, Alex Wennberg set Jordan Eberle up with a prime scoring chance. The Vezina Trophy candidate came across in a rare-for-modern-times two-pad stack and kicked Eberle’s shot away.

Grubauer was not distracted by Markstrom’s flashy save at the other end, though. The Kraken netmindre continued his strong play for the remainder of the period and remarkably went to the dressing room after the second with 28 saves on 29 shots.

Early in the third, we thought Grubauer had made an even better save than the one in the first period, diving back with his glove to rob Gaudreau. Really, though, it was Adam Larsson getting his foot in the way and deflecting the puck into Grubauer to save the day.

It reminded us a lot of the save Larsson made against the San Jose Sharks earlier this season. So, that’s two rounds of “grand Larssony” on the year.

The Flames kept pushing, though, and finally broke through. Lindholm, who has been on some kind of tear lately, chased down a loose puck in the slot, spun, and fired a deceptive wrister past Grubauer to make it 2-1 at 7:31 of the third.

The Kraken had a big push in the last couple minutes with Grubauer off for an extra skater. Markstrom made a couple great saves, though, and Seattle ran out of time.

Grubauer deserved better, stopping 35 of 37 shots on the night.