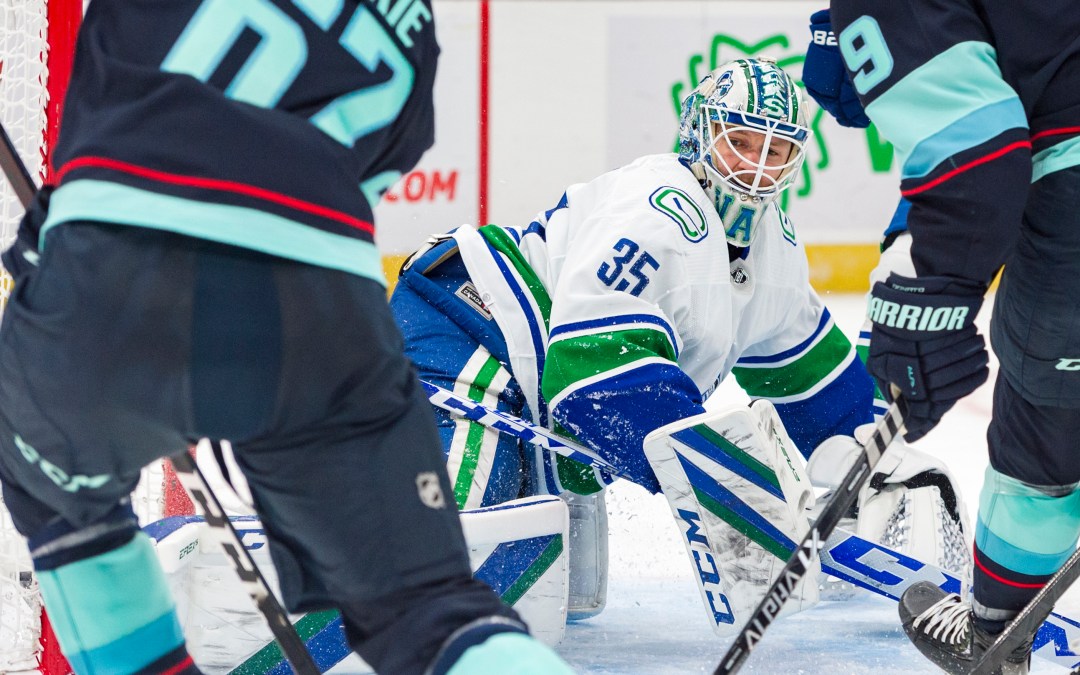 Chris Driedger did all he could Monday night at Rogers Arena, but it would not be enough as the Vancouver Canucks scored four unanswered goals over the final two periods in a 5-2 win against the Seattle Kraken.

Driedger stopped 41 Canucks shots, giving the struggling Kraken offense a chance, but Seattle could not take advantage and fell to 0-3-0 against its so-called rivals.

“We had some good quality looks tonight,” Kraken coach Dave Hakstol said. “It’s not all just about the shot clock, you know, that doesn’t always tell the whole story. So, it’s not about that. It’s about finding quality opportunities. We had a few more tonight just not at the right time of the hockey game. That second period is critical. That’s the turning point in the hockey game, and that’s the difference in the hockey game.”

Tyler Motte had a goal and an assist and Juho Lammikko, Elias Pettersson, and J.T. Miller each had two assists. Thatcher Demko made 25 saves for Vancouver (24-22-6), who kept its playoff hopes alive after losing its last game.

Jared McCann, playing his 400th NHL game, scored against his former team and Mark Giordano scored a shorthanded goal for Seattle (16-32-4), who will look to end a four-game losing streak Tuesday at home against the New York Islanders.

The Canucks outshot the Kraken 46-27 and took 57.6 percent of the unblocked five-on-five shot attempts and had 71.8 percent of all shot quality. Driedger made a season-high number of saves, keeping Seattle in the game, but the Kraken could not capitalize, scoring once at even strength and once shorthanded and went 0-for-4 on the power play.

The Kraken led after one but Canucks stormed back

For the second straight game, the Kraken gave up a goal on the first shot of the game. Motte scored for Vancouver at 11 seconds of the first period to make it 1-0 after the Kraken left him alone in front of the net for an easy score.

“Obviously, anytime you get scored on in the first 30 seconds like that it’s not [ideal],” Giordano said. “I thought the puck literally took a bad bounce behind the net there and they got it. They got a break I thought on that one and you come in in a good spot after the first and then I didn’t think we played very well from there on out. Anytime you give up that many shots and so many quality chances, you pretty much don’t have much of a chance.”

Seattle answered quickly on a goal at 3:12 when Jared McCann finished a two-on-one with Marcus Johansson for his 21st of the season.

Near the end of a failed Kraken power play Vince Dunn grabbed on to Vancouver’s Elias Pettersson who was about to skate down the ice alone. It turned out Dunn’s play paid off.

Giordano scored shorthanded at 14:26 to make it 2-1. Just as the ensuing Vancouver power play was starting, Joonas Donskoi got it to Giordano who skated in alone and slid a forehand past Demko. It was the fifth of the season for Giordano and his first since Dec. 30, a span of 19 games.

Travis Hamonic tied the game at 2-2 at 3:45 of the second period when his shot through traffic squeaked through Driedger’s five-hole.

The Canucks went ahead 3-2 at 16:41 on a rebound put back by Vasily Podkolzin who beat the Seattle defense to the puck and picked up his eighth of the season.

Vancouver enjoyed a 18-4 shots on goal advantage during the second period.

“I don’t think the second period was our best period, for sure,” Driedger said. “There were a lot of chances. I don’t know exactly what happened but they just outworked us out there. I thought we actually had a pretty good first, we recovered well after that first one against which is good to see. I thought we showed a little bit of resilience in the first to score two goals and take the lead. We just needed to keep that up and unfortunately we didn’t.”

Bo Horvat made it 4-2 at 35 seconds of the third period on a Vancouver power play. Parked at the edge of the left faceoff circle, Horvat scored his 15th on a one-time shot.

+ Driedger’s previous season high in saves was 40 against the Edmonton Oilers on Dec. 30.

+ McCann was originally a first-round draft selection by the Canucks during the 2014 NHL Draft when he was the 24th pick overall.

+ Motte’s goal at 11 seconds of first period was the fastest goal to start a game by any team this season.