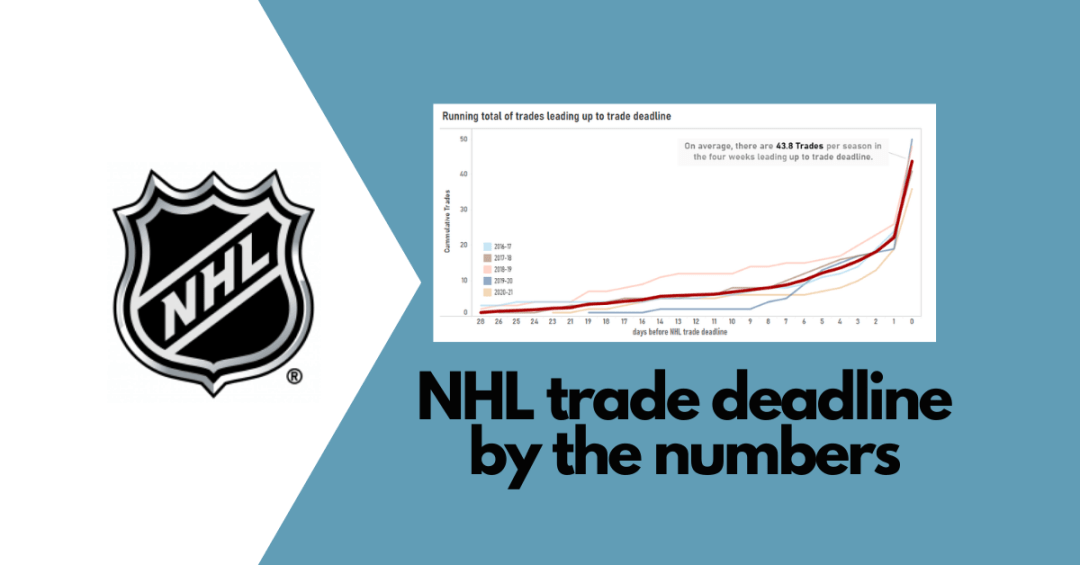 With the NHL trade deadline just four weeks away, we thought it would be a good time to look at previous trade deadlines to help prepare on what to expect over the coming month. This will be focused on the league as a whole and not necessarily on how the Kraken might approach the deadline, but don’t worry, we will write about what to expect from the Kraken in the coming weeks as well.

Ramping up to the trade deadline

So far, the ramp has been slow compared to past years, even with the two trades made in the last week. There typically aren’t that many done at this stage in the season anyway, but it’s worth noting that we’re lagging a little.

In the past five seasons, roughly 80 percent of the trades during this four-week window have occurred in the final week before the deadline. The lesson here is to try to exhibit patience if Seattle has still not traded anyone headed into the final week.

Here is how the totals look by season.

It is interesting to look at the drop last season from the prior season. This could be driven my salary cap constraints adding to the difficulty of getting deals done and also the challenges of getting players into and out of Canada. We will have to monitor the volume of trades this year to see if that drop in 2020-21 is the start of a trend or just a blip on the radar.

One thing that was interesting is that there were four teams that did not make a trade prior to the deadline last year: Arizona, Dallas, Minnesota, and St. Louis. In 2019-20, all teams made at least one trade. Again, the flat cap situation facing all teams could be a contributor here.

At a high level, there are only two assets a team can trade: draft picks and players. Here is how that has broken down over the last five seasons.

There is a bit of nuance to the player assets, as some could be NHLers or prospects (AHL/CHL), and some deals could just be for signing rights. Signing rights deals are done for players that might have been drafted in years prior but for various reasons might not have signed their standard NHL entry deal. These would include drafted players that are still playing in college, for example.

Here is how the player assets breakdown.

The important piece of information here is that it is rare to trade a first-round draft pick during the trade deadline. If you were hoping Mark Giordano would snag a first-round pick, it is certainly possible but could be a challenge as teams seem less willing to part with their top picks.

As a team that clearly will not be making the playoffs this year, the Seattle Kraken have several player assets that could be moved in the next four weeks. Our hope is sharing these historical trade deadline numbers gives you context and a different perspective on evaluating trades as we march toward the trade deadline.

If you have an questions, takes, or predictions, leave them in the comments section.