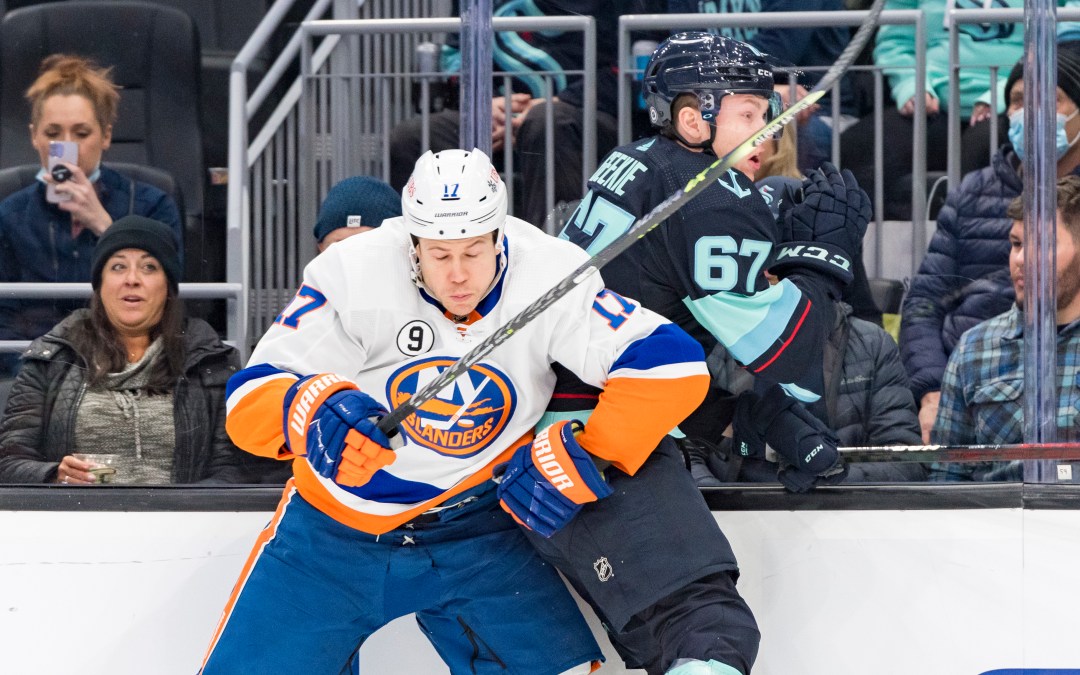 There was a point during Tuesday’s 5-2 Kraken loss to the Islanders when we thought we were headed for one of the worst Seattle performances of the season. The boys brought that bad of an effort and level of execution to start the game, but then they turned it on and showed once again why fans should continue to throw their support behind them, despite their stranglehold on last place. These guys do not quit.

In the end, though, Seattle had dug too big of a hole for itself, falling behind 4-0 before waking up midway through the second period and making a game of it.

Here are our Three Takeaways from the two very different 30-minute contests that were played Tuesday between the Islanders and the Kraken.

Takeaway #1: A tale of two games

The Kraken looked completely—and we mean completely—lifeless through the first half of this hockey game. Five minutes into the second period, Seattle had still registered just four shots on goal, and even that felt like a generous tally.

When Yanni Gourde beat Ilya Sorokin just off an offensive zone face-off, everything in the building changed. The fans were energized, the team started skating and spending time in the offensive zone, and although it was 4-1, the play went from dreadful to exciting in the blink of an eye.

Oddly, if the Kraken had converted a second time in that second frame and gone to the dressing room down two instead of three, we think they would have tied that game before it was said and done.

“It definitely got us some momentum, and we started to string together some shifts and play to our strengths,” said Riley Sheahan of Gourde’s goal. “I think when we forecheck like we were and move the puck around in the o-zone and get it to the net and kind of build off that, I think that’s when we’re at our best. We just gotta focus on getting to that point and then once we’re there, just letting ourselves make plays and generate some energy.”

“That’s momentum,” added Hakstol. “You feel the strain of where you’re at in your home building down by four and finally get one and that just gave us a jolt of energy. From there, you know, it really was like a flip of the switch for the next 30 minutes.”

For the second time this season, Hakstol scratched Joonas Donskoi for this game. In his place was Austin Czarnik, who faced the team that waived him just a few weeks ago. But Donskoi’s removal was less about Czarnik and more about the play of Morgan Geekie.

With Hakstol rotating players in and out, Geekie had become an easy target to scratch in recent weeks, as he had been downright ineffective. But after a solid game Monday, Hakstol kept him in on Tuesday.

Geekie again did not score, but he narrowly missed on several occasions, including on a play when Sorokin committed highway robbery. He had just gotten leveled in the offensive zone but got up, dusted himself off, and got in alone with the New York netminder, only to get denied by a flashy glove save.

Thatcher Demko made an equally large save on Geekie on the blocker side on Monday, so maybe the next Grade-A chance should go five hole?

Anyway, it’s great that Geekie is suddenly stringing together some positive performances. We had high hopes for him coming into this season, but things haven’t panned out the way anyone expected. Let’s see if he can continue to grow his game.

Takeaway #3: Build off the second half

This loss to the Islanders was the fifth in a row for the Kraken, and it came on the heels of a three-game tour through Canada that produced zero points. Seattle did not play well in its last game of the trip in Vancouver, and the compete level from that contest carried over into Tuesday.

Not only was the effort lacking again, but the execution was not close to what it needed to be in the first 30 minutes of the game. That explained why the Kraken had just four shots on goal through about the six-minute mark of the second period.

“We weren’t really getting out of our zone in the first period,” Gourde said. “By the end of the second and in the third, we played way more in the o-zone, which allowed way more shots… Our F3 was responsible and allowed our D to go down the wall.”

With every losing streak, a team needs to bottom out and then take baby steps toward righting the ship. This is certainly not the first losing streak Seattle has been on, and they’ve always eventually gotten themselves out, but not before an especially bad stretch of play. The first period of Tuesday’s game felt like rockbottom (we hope) for this skid.

From Gourde’s goal on, we were back to seeing the tenacious team we’re used to seeing at Climate Pledge Arena, and that is certainly something the team can build upon as it takes on Boston on Thursday.

“There’s nothing that I’d throw into print in terms of moral victories,” Hakstol said. “But pride and pushing and performing and sticking with it? Yeah, absolutely, there is something very important in that.”