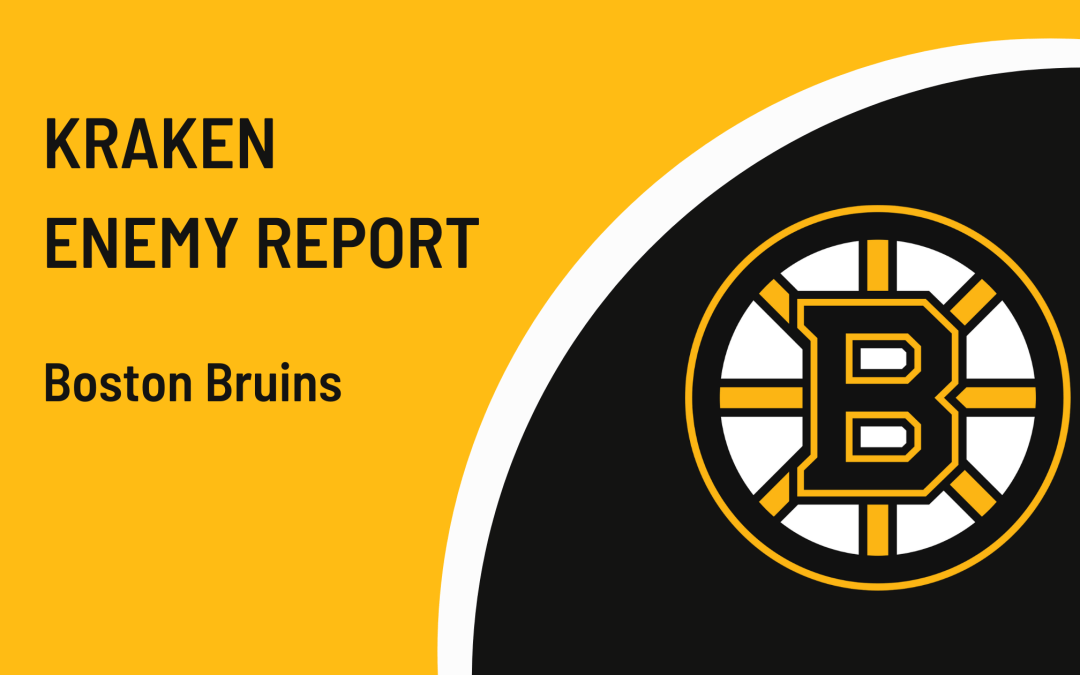 Thursday night, the Kraken will host the world-famous Boston Bruins at Climate Pledge Arena to try and put an end to a five-game losing streak.

Boston is the fifth original six team to visit Seattle, if you’re into that stuff. Even if you don’t care about history, the ‘B’ on their jerseys entices a ton of emotions, and some of those may be negative. The Bruins have had their share of rough and tumble teams over the years and the ‘Big, Bad Bruins’ stigma still follows them around.

That has been tamed somewhat, but Thursday will be the return of Brad Marchand, who is very skilled and has had his run-ins with players, teams, and officials throughout the league. Thursday will be his first game back after serving a six-game suspension for losing the proverbial ‘it’ against the Pittsburgh Penguins and their goalie Tristan Jarry.

“A lot of punches are thrown throughout the league and through games… that’s part of hockey and I didn’t expect it to get to where it went,” Marchand said after the Bruins morning skate on Thursday.

He also added that he knows he doesn’t have a long leash with the refs and that he’s going to keep the rage in check moving on.

“What I’m taking away from this is my threshold is very low right now,” Marchand said. “I really just have to stay away from anything at all, which I can do, I have been able to do it for a number of years now. And again, it’s just wrapping my mind around that and accepting it, whether I agree with it or not, and moving forward within the rules that I now understand are set for me. So, I think that’s essentially what it is, just making sure that I just stay away from everything because that’s where my threshold is at this point.”

It’s easy to root against Marchand if you’re a fan of a team that he’s playing against, but he undoubtedly is one of the best characters/pests the game has ever seen. He missed Wednesday’s practice to be back in Boston for the birth of his daughter, Rue.

The Perfection Line no more?

Marchand, for years, made up part of the so-called ‘Perfection Line, with center Patrice Bergeron and the always entertaining and noted donut pitchman, David Pastrnak.

It was one of the top lines in hockey but Thursday will be broken up, at least at the start of the game.

Head coach Bruce Cassidy has Marchand and Bergeron on the line together, but Pastrnak will play with Taylor Hall and Erik Haula, which in its own right is a formidable line.

Boston is a middle-of-the-pack team offensively, averaging 2.88 goals per game while allowing 2.74. That will pose as a challenge for the already offensively struggling Kraken who will play tonight without Jared McCann and potentially Yanni Gourde (who will be a game-time decision).

Linus Ullmark will start in net for the Bruins.

Boston bruising defenseman Brandon Carlo played his junior hockey with the Tri-City Americans from 2013 through 2016. One of his teammates for the 2015-16 season in Kennewick was Kraken center Morgan Geekie.

Ullmark played for the Buffalo Sabres prior to signing with the Bruins as a free agent in the offseason. While with the Sablres, his goalie coach was Kraken goalie coach Andrew Allen. Will that help Kraken shooters? Probably not, but still a fun fact

DeBrusk played his junior hockey mostly with the Swift Current Broncos, but during the 2016 WHL trade deadline came very close to being traded to the Seattle Thunderbirds. Seattle was eventually outbid for him by the Red Deer Rebels who were loading up that year to host the Memorial Cup. So, while not a clear-cut Northwest connection, DeBrusk checks in as an almost Northwesterner.