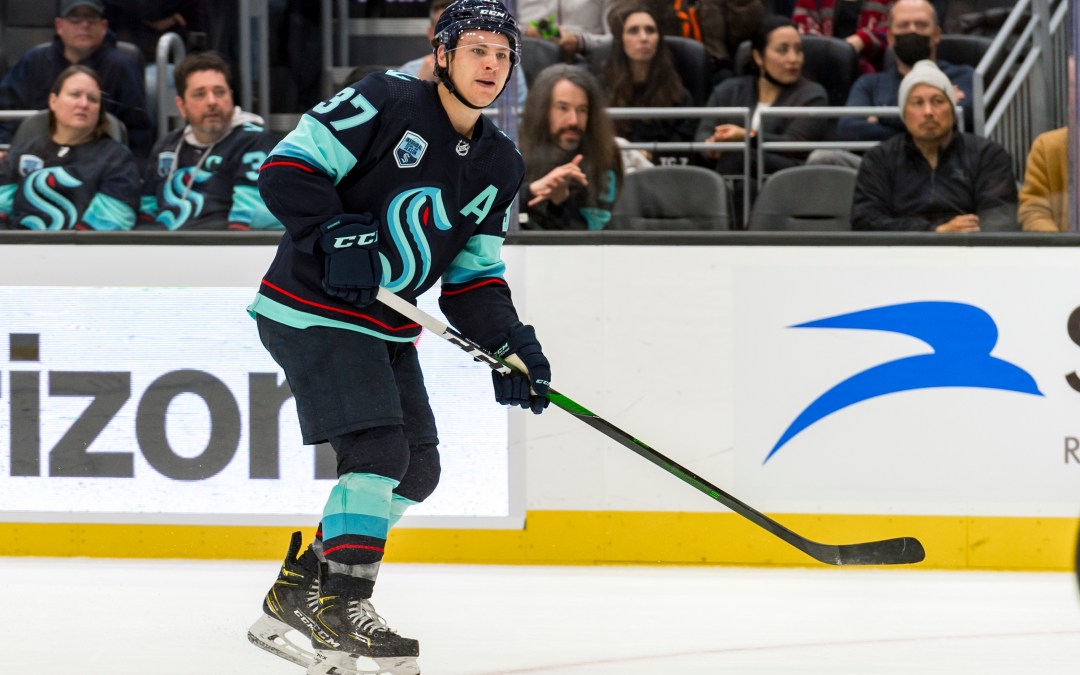 Things were already bad for the Seattle Kraken, who have lost five games in a row entering Thursday’s home matchup with the Boston Bruins. But they aren’t getting any easier, now that Jared McCann has officially been placed on injured reserve with an upper-body injury.

Coach Dave Hakstol made it sound like the McCann injury is not that bad, but he did not give a timetable, and being that the Kraken’s top scorer is actually on IR, he will miss at least a week. Seattle is still without fellow top-liner Jaden Schwartz, so the loss of McCann—the team’s leading scorer—becomes extra painful (pun intended).

Potentially adding to the challenge for Seattle, Yanni Gourde was not present at morning skate at Climate Pledge Arena. Hakstol called Gourde a “game-time decision” and would not disclose the reason for his unexpected absence.

Kole Lind was recalled from the AHL’s Charlotte Checkers to replace McCann on the roster, but we suspect he will be scratched if Gourde is able to go. If Gourde is not able to go, then we expect Lind to be inserted onto a line with Colin Blackwell and Mason Appleton. We shall see.

Kraken need to build on second half of previous game

The Kraken did not play well in the first half of their game against the Islanders on Tuesday and fell behind 4-0 before waking up in the second period. They flipped a switch and played much better in the second half, after Gourde scored to get them on the board (rhyming intentional).

“The two [halves] are very much connected,” Hakstol said Thursday after morning skate. “The biggest area that we didn’t execute on was entering the zone and extending that time. I mean we had five or six outnumbered situations in the first 15 minutes of that game, and I don’t know that we got a shot on goal. But more importantly, we didn’t extend that o-zone time. We were one and done in those scenarios.”

Hakstol also gave some credit to the way New York played in the neutral zone, but said Seattle consistently forced pucks into their structure. He also said the turnaround was thanks to “the decisions and the will that we had in terms of our puck possession” in the later part of the game.

The second half really was well played by the Kraken. If they can replicate that for a full 60 minutes on Thursday, they will have a good chance to win, even without McCann and (potentially) Gourde.

The Kraken and Bruins played each other a few weeks ago in Boston. That night, the Kraken came up empty on the power play, while David Pastrnak scored twice on the man advantage and led Boston to a 3-2 win.

On Thursday, the Bruins visit Seattle for the first time, and they will have one of their stars, Brad Marchand, back in the lineup after a six-game suspension for punching and swinging his stick at Tristan Jarry.

Marchand is a pest, and there’s no doubt about that, but he said Thursday morning that he understands the rules against him and needs to avoid getting himself in situations where he could be suspended again in the future. He also missed practice in Seattle Wednesday because his wife just gave birth to a baby girl, so he stayed back to help her get moved from the hospital to home. He was in a good mood Thursday morning.

“I’m sure he’s going to have a lot of jump [Thursday],” said former Bruin, Ryan Donato. “He’s such a good player and a tough guy to play against, so you got to have your head on a swivel when you’re against him, for more than one reason.”

The Bruins are in a playoff position, holding down the last wild card spot in the Eastern Conference. Coach Bruce Cassidy said that their lineup is a bit more dialed in than before, especially now that Tuukka Rask has officially retired. They know that Linus Ullmark and Jeremy Swayman are their two netminders moving forward, and their lineup feels more locked in than before with 50 games under the belt.

Ullmark will start for the Bruins against the Kraken.

UPDATE: Yanni Gourde did participate in warm-ups and line rushes, so it looks like he’ll play. Here is the lineup.

The Kraken will sport special warm-up jerseys tonight, commemorating Black History Month. The jerseys will be auctioned off at the game.

The game began in thrilling fashion. Mark Giordano took a tripping penalty at :20 of the first period, putting his team immediately shorthanded. 1:22 later, Adam Larsson joined him in the box after catching Taylor Hall with a high stick and drawing blood.

Would you believe us if we told you that the Kraken not only killed the five-plus minutes of penalty time, but also came away with a 1-0 lead? It’s true!

Completely gassed after a long shift on the kill, Riley Sheahan huffed and puffed through the neutral zone with open ice ahead of him. He took the puck just across the offensive blue line and pulled up to wait for a trailing Giordano, whose penalty had just ended. Giordano had all day to pick his spot on Ullmark and sniped with Seattle’s first shot of the game.

A bit later in the frame, Charlie McAvoy narrowly missed a devastating injury. Alex Wennberg didn’t see him, and lifted his stick up. The stick got caught under McAvoy’s helmet, and lifted it off his head. McAvoy went down for a bit, but was able to recover. Scary play.

Meanwhile, Philipp Grubauer was standing on his head at the other end of the ice, turning away grade-A chance after grade-A chance throughout the first period. He almost escaped the frame without giving up a goal, but the Bruins got a very lucky bounce when the puck popped up in the air and over the net. Jeremy Lauzon tried to bat it out of the air, but didn’t get enough of it, and it dropped right on the goal line for Jake DeBrusk.

That made it 1-1 with 2:27 left in the period, and that was how a wild first period ended.

Here was our favorite save by Grubauer in the period, ironically shot by Riley Sheahan:

On their 24th shot in just 26:47 of total game time, David Pastrnak wired a one-timer from the left dot. Despite Grubauer being on top of his game at this point, there was no chance he was stopping that one.

The Kraken answered to make it 2-2 at 13:19. Off a broken play in the neutral zone, Seattle found itself on a three-on-one. Marcus Johansson passed to Jordan Eberle, and defenseman Mike Reilly just kept backing up. So, Eberle cleverly took the ice that was being offered and walked all the way into the crease before he dangled to his backhand and lofted it over a sprawling Ullmark.

By the time the teams went to the dressing rooms after the second horn, Grubauer had already made 29 saves on the night.

We didn’t forget to write anything in the third period, but compared to the hectic first two periods, it felt like little happened in the final frame of regulation. Things tightened up a lot defensively, so there just wasn’t anything all that noteworthy. The score remained 2-2, and after 60 minutes, we headed for overtime.

There was only one overtime highlight. This was it:

It was a disappointing outcome, but the boys played a much better game than they did against the Islanders on Tuesday.