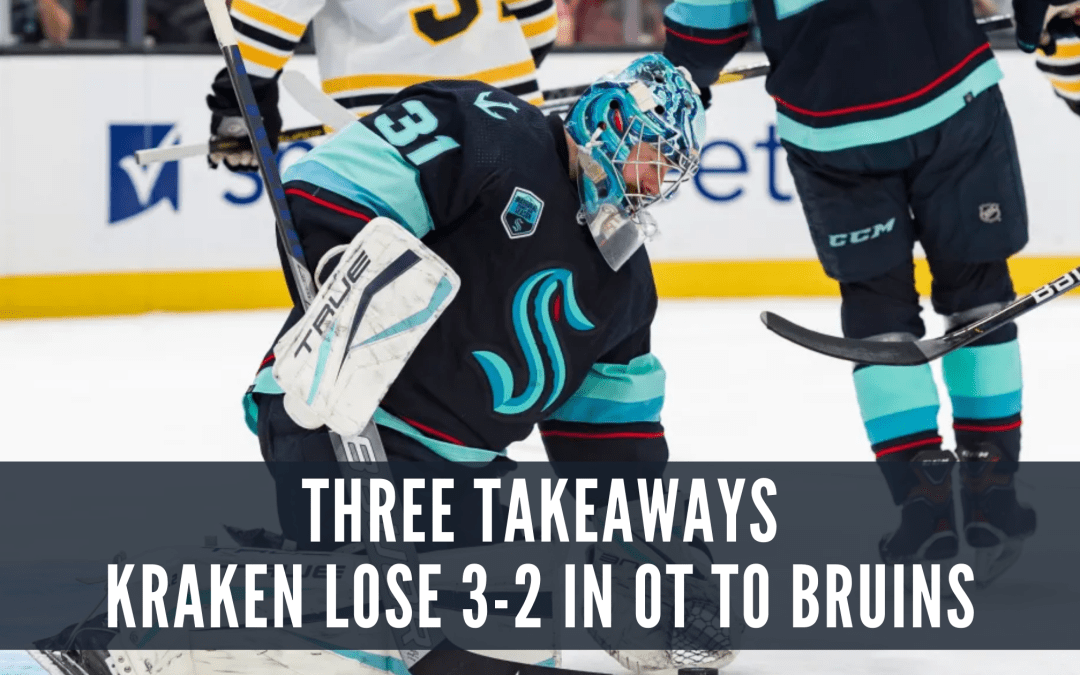 When news broke just before morning skate that Jared McCann was on injured reserve and would be unavailable for Thursday’s Kraken game against the Boston Bruins, we knew the deck was stacked against Seattle. It got stacked even higher, though, when the Kraken spent half of the opening period in the penalty box facing a team that scored two power play goals against them just three weeks ago.

Even so, Seattle put together a downright gutsy effort from the goal crease out on Thursday and nearly pulled off a stunner but instead took its sixth loss in a row.

Here are our Three Takeaways from an exciting but ultimately disappointing 3-2 overtime Kraken loss to the Bruins.

Philipp Grubauer was razor sharp from the opening face-off on Thursday, and he had to be. With Kraken players parading to the penalty box throughout the opening 20 minutes, the puck was in Seattle’s zone for almost the entire frame.

Grubauer was phenomenal, though, making saves of all shapes and sizes, and turning away 16 of the 17 shots he faced in the period. The only one that got behind him came off a fluky play where Jeremy Lauzon hit a foul ball trying to bat a wobbling puck out of harm’s way.

Somewhat comically, his best save of the night—which came in that impressive opening period—was friendly fire from Riley Sheahan. Trying to deflect a pass away, Sheahan redirected it right toward Grubauer, who was sprawling in the wrong direction. He was able to somehow stop his momentum, push back the other way, and do a full split to just barely get his left toe on the puck.

It’s rare that we agree with the “WaFd Signature Save” choice, but that was a truly a remarkable stop.

Grubauer didn’t want to take much credit for his performance after the game. “I think we did a better job of keeping guys to the outside, boxing them out, like taking options away,” he said. “It’s not just [about] a shot, there’s a backdoor option, a one-timer on the other side, so the guys let me read the game really well and focus on one guy or two guys. We keep doing that and taking sticks and rebounds away, we have a good chance.”

Just when we thought Grubauer was going to steal the victory, Jake DeBrusk beat him from a sharp angle 33 seconds into overtime.

It’s our opinion (we did not ask Grubauer about this, though we probably should have) that he was not expecting DeBrusk to shoot from that position in a possession-focused three-on-three period. Watch the clip above again, and look how Grubauer picks up his right pad just before the shot. He sets the inside edge of his skate into the ice, then puts his pad back down when he sees the shot coming, but by then it’s too late. So we think he was preparing to push to the other post to take away either a one-time opportunity or a DeBrusk wraparound.

Regardless, that was a memorable performance by Grubi, who made 36 of 39 saves in all.

The primary reason that Grubauer faced 39 shots on the night is that Seattle spent an absurd amount of time in the penalty box in the first period. Mark Giordano took a tripping penalty 20 seconds in, then Adam Larsson joined him in the box at 1:42. Larsson’s penalty was a four-minute high-sticking penalty, so Seattle essentially spent the first six minutes of the game down a man, including a 38-second stretch at five-on-three.

Yet, remarkably, the Kraken were ahead 1-0 by the time they killed off Larsson’s penalty, thanks to a beautiful shorthanded goal by Giordano that was set up by an exhausted Riley Sheahan.

Add an Alex Wennberg penalty and a second call on Larsson, and you have yourself one very tiring period. Seattle’s penalty killers did a fantastic job, and the team nearly got to the room with a 1-0 lead, but that lucky DeBrusk goal brought the Bruins level.

“That’s not the best formula to start with,” coach Dave Hakstol said. “I believe the entire first period, there’s about eight and a half or nine minutes of five-on-five hockey, so we were short-handed too much. But the penalty killers did a real good job through that, our goaltending was good through that, and our energy and momentum was good through that.”

Added Jordan Eberle, “Grubi stood on his head. Once we kind of weathered the storm there, and we got a shorthanded [goal], we ended up coming out over the top of it.”

They did indeed, but we still can’t help wondering what might have been if Seattle didn’t spend so much of its energy killing penalties in the opening frame.

Takeaway #3: Better, but still not enough

The first half of Seattle’s game against New York on Tuesday was among the worst stretches of hockey we’ve seen the Kraken play at Climate Pledge Arena this season. On Thursday, the team looked much better from the drop of the puck, despite the many penalties against in the early going.

The way the players seemed to be playing for each other, doing everything they could to keep pucks to the outside and blocking shots, was telling of the level of effort in this game, and made us believe they were going to pull out a victory.

“We played our asses off tonight for 60 minutes, bottom line,” Hakstol said. “Tough way to lose a hockey game, but you know, I’m proud of our effort.”

It was a continuation of the way the Kraken played in the second half against the Islanders on Tuesday, and a good sign that Seattle will soon break out of this latest six-game losing streak.

It is on nights like Thursday when we’re reminded that Seattle’s lineup is lacking in depth and top-end offensive skill. Despite playing their asses off, as Hakstol mentioned, Boston got a second period goal from David Pastrnak where he one-timed a perfect Charlie McAvoy pass and beat Grubauer. Grubauer had zero chance on the play, which was a pass from an elite play-making defenseman to an elite goal-scoring forward. Seattle just doesn’t have guys like that yet. A 100 percent effort still only gives the team a chance to win, and not necessarily a win.

By the way, we asked Hakstol what the difference was between the start on Thursday and the start on Tuesday, and he said: “We had fresh legs.” That was it.

In the end, it was a disappointing loss, but a positive step for the Kraken.