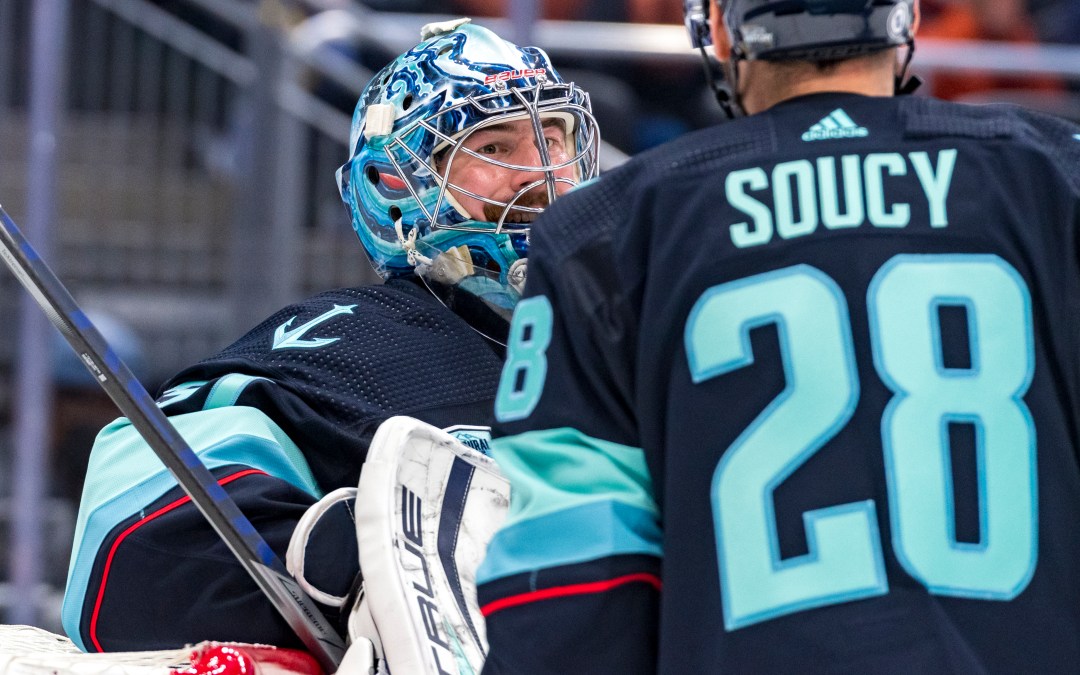 We are not in the prediction business, but if we were… well… let’s just say that the Kraken have looked like they are ready to get off this losing streak in the near future. It’s been six consecutive defeats for Seattle, including a disappointing overtime ‘L’ to Boston at Climate Pledge Arena on Thursday. Still, it feels like the boys have been heading in the right direction over the last game and a half, and a win has to be on the horizon. Could that skid-snapping Kraken ‘W’ come against the Sharks on Sunday?

Despite the outcome, the Kraken had a good 60-minute effort against the Bruins and very nearly stole a win against a better team. It would have been quite the accomplishment, too, as Seattle spent more than half the first period shorthanded.

On that note, the penalty kill has gotten a lot better lately and was especially impressive Thursday. Coach Dave Hakstol indicated on Sunday morning that the team has made some changes to its kill, now taking a more aggressive posture. “We made that change a few games ago because we felt like we were really getting too stagnant and [would] just end up being dictated to, rather than dictating anything,” Hakstol said. “That was a real good change the players have done a real good job with, and we’re getting— you know, the detail of it is getting quicker and better and more efficient.”

He also explained the change is mostly in the way that the forwards are pressuring and rotating. One forward pressures the puck carrier, then gets back to the middle, and his forward partner then does the same.

It certainly worked on Thursday, as the PK held the scary Bruins power play off the board.

The Kraken looked downright bad in the first half of their loss to the Islanders on Tuesday, but they got on their toes and attacked more aggressively in the second half and nearly turned that game around. The effort carried over to Thursday’s game, and in general, the Kraken looked much better that night. The difference in the game was a hard-luck shot by Jake DeBrusk from a bad angle that beat Philipp Grubauer in overtime.

Our belief is that when you’re on a losing streak, you have to bottom out, then make some positive baby steps before you can break out. We think the bottoming out happened at the beginning of the Islanders game, and those baby steps have been taken with the second half of that game and the impressive effort against Boston. So, is the breakout from the skid coming Sunday?

Grubauer was outstanding against the Bruins and absolutely deserved a victory. That’s twice in the last eight days that he’s had performances like that, with the other coming against Calgary on Feb. 19.

In his last three starts, including a not-as-stellar outing against New York, Grubauer has a .919 save percentage. He will get the start again in San Jose.

It is interesting how—despite the club’s unimpressive results as a whole—Seattle has had the numbers of a couple teams this season. The Florida Panthers, Buffalo Sabres, and San Jose Sharks jump to mind as teams that have struggled with the Kraken.

Seattle has handed two losses to San Jose, one on the road and one at home. In the Jan. 20 home win, Seattle didn’t have its best effort but got away with it and earned the two points.

The Kraken had a dominant first period going, en route to outshooting the Sharks 19-4. Still, San Jose somehow got on the board first. Off a three-on-three rush, Noah Gregor, Logan Couture, and newly claimed Ryan Dzingel connected on a nice passing play. Dzingel beat Grubauer through the wickets for his first goal as a Shark.

Morgan Geekie salvaged an excellent period for the Kraken just nine seconds later, though. Just off the center-ice face-off, Seattle broke into the San Jose zone. Ryan Donato chipped a bouncing puck to Geekie, who settled it down and lifted a backhander over the outstretched pad of James Reimer.

That was Geekie’s first goal since Dec. 11, and it took Seattle into the room level at 1-1.

Two minutes into the second period, Jacob Middleton laid a big hit on Mason Appleton in the neutral zone. In response, Jeremy Lauzon challenged Middleton, and the two dropped the gloves. As they tussled near the penalty box, the off-ice official stupidly opened the door, and the players fell into the threshold. It was a dangerous decision to open the door, but thankfully, neither player was injured.

Soon after the fight, it appeared the Kraken had taken their first lead of the game when Calle Jarnkrok scored. There was contact between Marcus Johansson and Reimer, though, and the Sharks successfully challenged to keep the game tied at 1-1.

A few minutes later, Scott Reedy put the Sharks ahead with his first NHL goal. Just off an offensive-zone face-off, Reedy skated through the circle and picked up the loose puck. He shot through traffic, and it eluded Grubauer.

The second period was more level than the first in terms of possession, but Seattle still led almost every metric except the one that mattered.

The third period was fairly tight checking, though Grubauer made several nice saves in the frame on Timo Meier. Jonah Gadjovich joined Reedy in scoring his first NHL goal in this game, when a rebound bounced off his skate and slid past Grubauer to make it 3-1. Hakstol challenged that goal for goalie interference, but it was ruled a good goal.

The three goals for were more than enough support for Reimer, who was outstanding throughout. The Kraken only beat him once (legally), meaning they have now averaged just 1.86 goals per game during this now seven-game losing streak.

Our prediction that Seattle would have a good effort was accurate, but the result still was not there.