Kraken come out flying against Sharks, but lose seventh straight 3-1 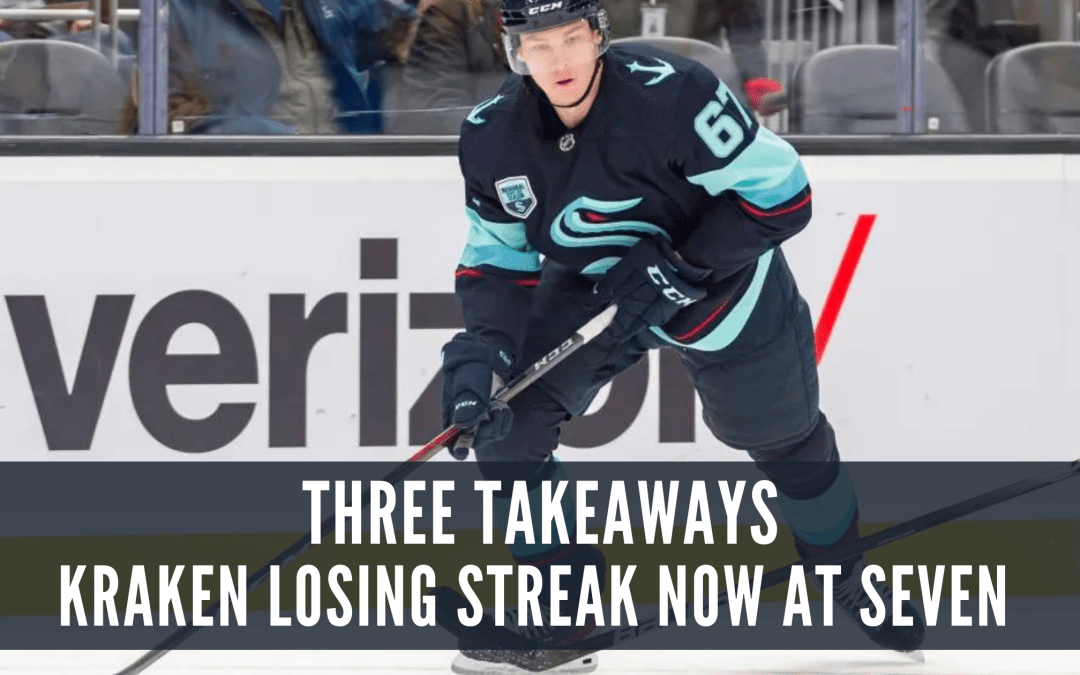 We really thought Sunday would be the night Seattle would snap its six-game skid. The Kraken did come out flying and largely dominated the Sharks in the opening frame, outshooting them 19-4 and taking an early 1.25 to .37 lead in expected goals for. Yet, San Jose hung in there and somehow got the first goal, then went to the dressing room with a 1-1 tie.

A disallowed Kraken goal turned the tide in the second, James Reimer played great throughout, and the Sharks got enough opportunistic scoring to extend Seattle’s current streak of misery to seven games.

Takeaway #1: Video reviews are not a strength for the Kraken

Remember game 1 in franchise history in Vegas? The winning goal that night came off the skate of Chandler Stephenson on a play that many Kraken fans and Kraken coach Dave Hakstol thought should not have counted. Well, that play set the tone for how things would go for this team in video reviews throughout this inaugural season, and Seattle’s lack of success in this area was especially prevalent on Sunday.

The Kraken appeared to take a 2-1 lead four minutes into the second period, when Calle Jarnkrok fired home what would have been his 11th “Calle Tally” (that nomenclature is courtesy of John Forslund) of the season. Replay showed that Marcus Johansson had made contact with Reimer at the top of the crease, but it definitely seemed like he had been forced in by Marc-Edouard Vlasic.

Sharks coach Bob Boughner challenged, and predictably—because that’s just how things have gone for the Kraken with video reviews—the call on the ice was overturned. So, back to 1-1 we went, and the decision clearly took some wind out of Seattle’s sails.

“I think if you reverse the situation, I think they would have called it a goal on us,” Philipp Grubauer said with a smirk after the game.

Then late in the contest, Jonah Gadjovich got in Grubauer’s grill. A Brent Burns shot got tipped by friend of the pod, Jasper Weatherby, then pinballed off Grubauer and off Gadjovich’s skate, and finally slid into the net for Gadjovich’s first career NHL goal. Hakstol challenged that play for goalie interference, and there was also a league-initiated review for a potential kick in, but neither was enough to overturn the goal.

“3-1 with five minutes to go, they were in the crease,” Hakstol said of his decision to challenge Gadjovich’s goal. “To be honest, probably a 50-50 call from what I saw.” He added that he was looking more at the contact on the initial shot, rather than the rebound that actually got put into the net.

The decision to challenge was a desperation call that was made because the goal gave San Jose a two-score lead at 14:37 of the third period. The failed challenge was probably the nail in Seattle’s coffin, though, because it also gave the Kraken a late delay-of-game penalty.

We thought there was more of a chance for the kick to be the reason San Jose’s late insurance goal could get disallowed, but the NHL’s situation room did not see enough of a distinct kicking motion to change the call on the ice. We’ve also seen that movie before.

In retrospect, both goals probably should have counted, which simple math tells us would still have resulted in a 3-2 Sharks win. You never know about the butterfly effect if Jarnkrok’s goal had stood, though, as a 2-1 lead for the Kraken could have led to a different outcome.

By the way, Gadjovich and Scott Reedy both scored their first career NHL goals on Sunday, while Dzingel got his first as a Shark. So that’s neat.

Takeaway #2: Geekie gets the monkey off his back

Morgan Geekie can regularly be found by himself on the ice for 30 or 40 minutes after Kraken practices working on his individual skills. One of the areas he’s been focused on lately is lifting pucks into the top of the net from in close.

On Sunday, Geekie scored a carbon-copy goal of what we’ve seen him practicing in those extended sessions, hoisting a backhander over the outstretched pad of Reimer to tie the score at 1-1.

Even though the Kraken lost, Geekie scoring is significant. It’s been a tough season for the young winger offensively, and he hadn’t registered a goal since Dec. 11.

“It definitely weighs on you, for sure,” Geekie said of the long drought. “I’ve had a lot of chances, so I try to take that for what it’s worth, and when those stop coming, I think that’s the real issue.”

Though he’s still just 23 years old, we hoped the offensively gifted forward would find the back of the net often and command a role closer to the top of Seattle’s lineup this season. That hasn’t happened, and the marker against San Jose was just Geekie’s third as a Kraken.

He has been noticeable for several games in a row, though, so we weren’t surprised to see him get the monkey off his back.

And you know who else was not surprised to see it? Morgan’s brother, Noah. “I do have to give credit to my brother,” Morgan said. “He did say that I was going to score tonight, so we’ll give that one to him… We’ll half it.”

We are very much rooting for Geekie to have a long, successful run with the Kraken. Here’s hoping that the goal in San Jose opens the floodgates for him.

Takeaway #3: Seattle is playing well, but still lacks the firepower needed to win

The main reason we thought Seattle was going to come out on top against the Sharks is that the group had put forth a good 60-plus-minute effort against the Bruins on Thursday, only to fall 3-2 in overtime. That performance had carried over from the second half of the game against the Islanders on Tuesday, so we thought things were trending in the right direction.

We were mostly right, except for the part about Seattle actually getting a result.

The Kraken came out flying against the Sharks, who initially looked like a tired team on the second of back-to-back games. But Reimer kept Seattle off the board long enough to allow Dzingel to find an opportunistic goal at the other end. Geekie’s goal came just nine seconds after Dzingel’s, but still, a 1-1 tie after such a lopsided opening frame had to give hope to a San Jose team that frankly should have been trailing by a couple goals after 20 minutes.

“We did everything other than come out of the first period with a lead,” Hakstol said. “That’s the way we wanted to start the hockey game.”

Added Geekie, “I think we forechecked hard, had a lot of pressure in the first period. I think that’s something that we just need to kind of sustain for 60 minutes, and I think if we can do that we’ll have some more success.”

Without taking anything away from Reimer, the lack of scoring is nothing new for Seattle, which has averaged just 1.86 goals per game on this seven-game losing streak. The latest loss was also another stark reminder that the Kraken simply do not have the offensive firepower needed to win on a regular basis, and that important missing element is especially obvious with Jaden Schwartz and Jared McCann simultaneously on injured reserve.