With trade deadline approaching, what should Kraken do with Calle Jarnkrok? 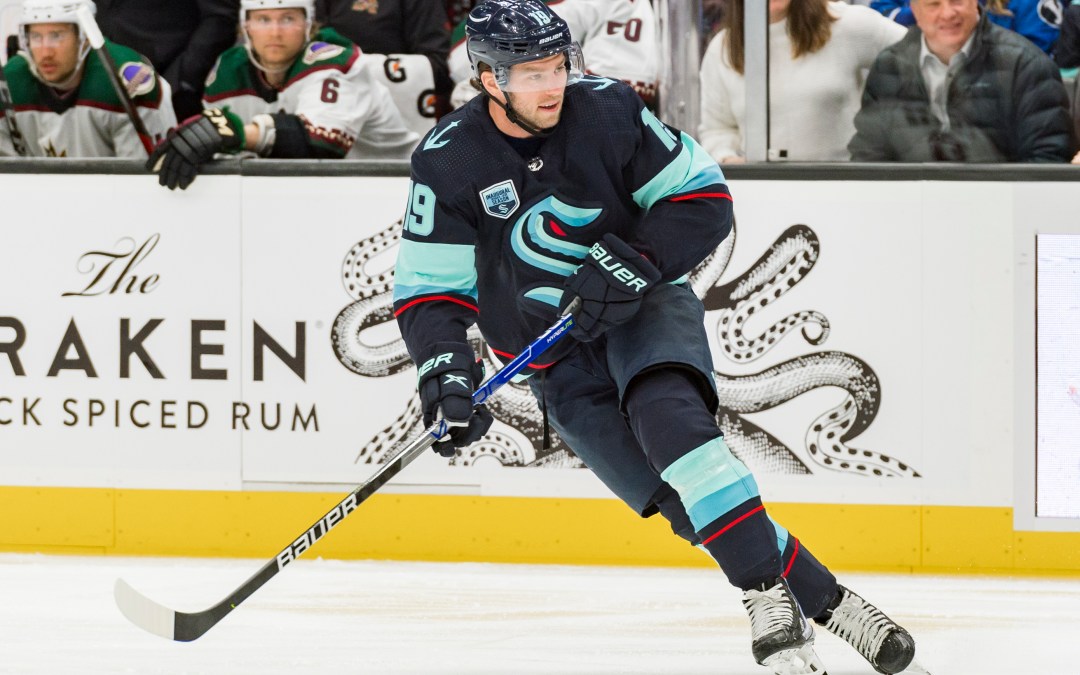 On the ice, things have gone about as poorly as they possibly could go in this inaugural season for the Seattle Kraken. With the team firmly planted in last place in the Pacific Division and pushing for a lottery pick in the 2022 NHL Entry Draft, it has become abundantly clear that the current roster does not have the offensive skill needed to compete for a playoff spot. This means general manager Ron Francis will be a seller at the upcoming March 21 trade deadline, as he looks to build for the future.

What Seattle does have, though, is a core of solid role players and flexibility to make changes after this season, thanks to cap room and expiring contracts. For most of those expiring contracts, it seems like the Kraken have the power to choose whether to bring back the player. But one individual whose status beyond this season remains especially murky is Calle Jarnkrok, who may be playing himself out of town… in a good way.

Should the Kraken move him before the deadline, or should they try to re-sign him? Would he re-sign if given the opportunity? Let’s try to get to the bottom of those questions.

A tale of two seasons

The season got off to a tough start for Jarnkrok, who missed the entirety of the team’s opening five-game road trip with COVID. That included his return to Nashville, where he played the previous seven seasons. He debuted in the Oct. 23 home opener against Vancouver and went without a single point in his first 12 games as a Kraken. Jarnkrok has always been more of a two-way player than an offensive juggernaut, but 12 games was a long time to go without even registering so much as an assist.

On Nov. 21, the 30-year-old Swede looked like he was ready to break out of his early-season funk. He scored a goal and an assist in a memorable win against the Washington Capitals and was absolutely flying that night. But the following game, Jordan Staal of the Carolina Hurricanes fell awkwardly on Jarnkrok’s leg, and just like that, Jarnkrok was back on the shelf for six more games.

“Yeah, it was pretty tough at first to just stay home from the first game and watch the guys go play,” Jarnkrok said in an interview on Saturday. “It took me a while to get going for sure. After that, and after that second injury that I had, I feel like I’ve been playing better.”

“He had the challenge of going through COVID early on,” coach Dave Hakstol said on Jan. 25. “And I believe as you miss time early in the year, and you’re not feeling great, it’s physically hard to catch up when you’re doing it on the fly. I would apply that to his first four to six weeks when he came back.”

After returning from the second injury, Jarnkrok did turn his season around and has since become one of the Kraken’s more reliable forwards at both ends of the ice. Since the beginning of December, he has nine goals and 20 points in 29 games, or .689 points per game during that span. If he continues at that pace for the remainder of Seattle’s 27 games, Jarnkrok would set a career high with 40 points, despite the 11 games lost and the 12-game pointless streak.

Earlier this season, we asked Jarnkrok what had changed in his game. “I don’t know if much has changed, to be honest with you,” he said. “I’m still the same player trying to work hard every game, just having some more luck and been able to score.”

What should the Kraken do with Calle Jarnkrok?

If Jarnkrok wants to stay in Seattle beyond this season, we think he’s shown enough to earn himself an extension on his contract, which is expiring after this season. The current deal, originally signed with Nashville in 2016, has paid him $2 million per year for the last six seasons. That’s a reasonable number against the salary cap, especially when you consider that players like Rickard Rakell, Brendan Gallagher, and Viktor Arvidsson have produced similar offensive numbers over the past few seasons and all make significantly more money.

The difference between Jarnkrok and those three players is that those players have all had big individual seasons in the past with over 30 goals, but are all a few years removed from doing so. Looking at more recent outputs, Jarnkrok is producing comparably, so we think the current contract is a good value. Jarnkrok should probably get a nice raise on his next deal, but we would expect the number to still be manageable for a lot of teams.

The case for keeping Jarnkrok

One thing the Kraken have successfully done this season is create an identity as a team that is hard to play against, doesn’t cheat, and brings effort (almost) every night. The lack of results hasn’t been for lack of trying, rather a lack of top-end skill.

It’s worth asking who the core players are that have helped to build that identity. Who from the current group drives that effort? Which players continue to push the team forward if an infusion of skill comes in the next couple seasons?

Jarnkrok has solidified himself as a versatile player that brings that effort night after night and has done everything asked of him. He has been used on the power play and penalty kill and played up and down the lineup. Heck, with Jared McCann injured, Hakstol has had Jarnkrok playing in a top-line center role the last couple games.

“He jumped in there the other night [against Boston], and he did a real nice job of it,” Hakstol said on Saturday. “Jarny is a guy that’s got a real good defensive DNA. He just understands and sees the game from that side, as well as the offensive side. So that along with the fact that he’s taking face-offs regularly for us this year, he was very comfortable playing down low defensively, and he has pretty good poise with the puck to be able to get us out of the zone and those tighter spots.”

All this indicates that he would be a good player to keep around next season and beyond, but we still think the allure of trading him for a pick and/or a prospect will be too enticing for Francis.

The case for trading Jarnkrok

At this point, the Kraken really should be open to trading almost anybody, with very few exceptions. For a guy like Jarnkrok on an expiring contract at a reasonable cap hit, we fully expect teams to come calling, especially considering that he has shown the ability to play anywhere in the lineup and has plenty of playoff experience. In fact, we think Jarnkrok may be the most valuable trade chip Seattle has, at least in terms of its players on expiring contracts.

At this very early stage in the history of the Kraken, it’s hard to imagine any of the players leaving, since this is the only iteration of the team that we know. But the long-term success of the Kraken isn’t about this year, and it probably isn’t about next year either, so any return that Francis can get should be considered.

We asked Francis during his press conference on Tuesday if he sees Jarnkrok or others on expiring contracts like Marcus Johansson fitting in as part of the core beyond this season. “Those would be discussions over the next few months– you know, some of it depends on what teams call and ask for or are willing to give you for them,” Francis said.

“The other thing is maybe having that discussion as to what [the players] are thinking and what they’re looking for moving forward. I mean, there’s always the option of trading a guy and then kind of sitting there waiting and see what happens in the summertime. So there’s a lot of different scenarios that play out, but certainly, those guys have come to play hard for us each night and we appreciate what they’re doing for us.”

That last option that Francis mentioned of trading Jarnkrok now and looking to re-sign him as a free agent in the offseason makes a ton of sense.

We hate to say it, because we love Jarnkrok’s game, but the right move is to trade him before the deadline.

Does Jarnkrok want to return?

Even if the Kraken preferred to keep Jarnkrok, rather than trading him, would he want to stay?

Jarnkrok says he has enjoyed his time in Seattle, and speaks highly of what the Kraken have built so far. “Everything’s been good. Organization is awesome, all the facilities, this is the best place right here,” he said, referencing Kraken Community Iceplex. “Results haven’t been good enough, and except for that, I think it’s been unbelievable here.”

So what does he want to do beyond this season?

“I haven’t really thought about it. At the end of the day, it’s a business, and it’s not up to me, really, to be honest with you. I really like it here, and that’s all I can say.”