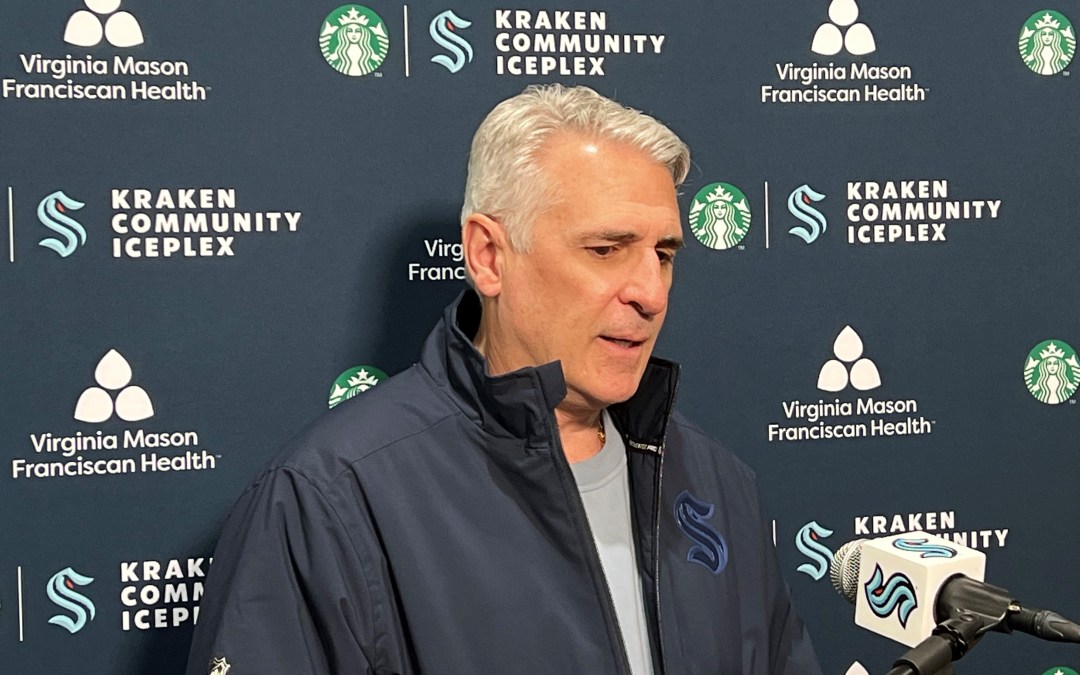 Kraken general manager Ron Francis made himself available to the local media Tuesday following the team’s practice at the Kraken Community Iceplex. He touched on a number of topics, and while he did not drop any bombshells or break any news, he did offer some insight into the March 21 NHL Trade Deadline, the season so far, and the upcoming NHL Draft.

Here are some of the highlights.

Francis first announced that the club had signed over-aged forward Tye Kartye from the Soo Greyhounds of the Ontario Hockey League to an entry level contract.

Kartye was in training camp with the Kraken this past fall and in his first 45 games this season has scored 33 goals, 25 assists, and 58 points.

Kartye will finish the OHL season with the Greyhounds and most likely end up with the AHL Coachella Valley Firebirds next season.

Francis on the trade deadline

“Obviously the way the season has gone, we’re not gonna make the playoffs. So, I think at this point you look at your team and there’s pieces you want to keep that you believe are core pieces. And then if teams are calling on other pieces, you have to have those discussions and see what the offers are. And if there’s a move that makes sense, then you go ahead and do it.”

Francis was asked about current players on the roster and if they were viewed as core players moving forward and therefore not on the market.

“I think you always have to be open for anybody. But I think you identify the guys that you want to be a part of your core moving forward and it’s going to take a significant piece to change that direction, but that’s– I think with any team, you look at your team and everybody uses ‘If Gretzky can get traded then anybody can get traded.’” So, you know, I think that’s something that you’re constantly looking at, and if it’s something that makes sense that makes your organization better short term or long term you have to consider all options.”

Will the Kraken be willing to take on salary via a trade?

“Absolutely. Yeah. We have the cap space, and our owners are willing to spend the money, so we’ve made that well known to all the GM’s that if they need a third-party broker or if there’s a deal or contract they need to move that makes sense that we’re open for business on that angle as well. Our owners have said from day one we have the green light to spend to the cap. So, as we get into the free agent market this summer, there’s always the risk that you don’t get the guy you want or somebody else wants to play [somewhere else] for some other reason, whether he’s from that market originally or something else, but I plan to certainly be aggressive again in free agency this summer.”

It’s been reported that Francis has talked with captain Mark Giordano about the possibility of being traded. But, what about anyone else on the roster?

“I’ve had the conversation with Gio, I haven’t really had conversations with other players at this point. You know, that may change as we get closer to the deadline, but at this point I haven’t. I think you’re always up for making deals, if it makes your team better. But I’m not sitting here and saying I gotta dump money. I feel comfortable that we have the cap space and the money available to make decisions.”

Francis on this season’s struggles

“It’s going to sound like excuses, but the lineup we thought we’d play with this year we played with for just over two periods… We had to cancel team events early, which helps get our guys together. We had to cancel practices because of situations where somebody tests positive [for COVID] so you didn’t get the time to do certain things. And it’s tough to get a group that doesn’t know each other together. To learn a new system to let each other feel comfortable.”

“Thought we were really starting to show great signs of coming together leading up to the All-Star break. We’re struggling a bit getting back to that level where we were at. But, you know, this has not been always a fair thing to assess either. Based on what’s happened earlier this season we still think the coaching staff is working hard and doing a good job and we continue to back them up.”

On Matty Beniers, Ryker Evans, and Ryan Winterton and the 2022 NHL Draft

Have there been conversations with Beniers about when he’ll sign with the Kraken?

“No conversations at this point about what he’s doing moving forward. Matty is with Michigan. That’s where his focus is right now. They’re trying to win a national championship and we wish all the best for him and his teammates. Once that is complete, then we’ll get into discussions with him and his agents as to future plans, but we’ve certainly been really pleased with what he’s doing.”

If Beniers signs at season end, would the Kraken be willing to burn the first year of his entry level contract?

“The team would certainly prefer not to burn it but that’s part of doing business in today’s world with high draft picks.”

What does Ryker Evans need to do in order to make the team out of training camp?

“Ryker came in last year and was a real pleasant surprise in camp. It’s not every day you see a young guy play with that kind of confidence and moxie and I thought he did a real good job. He’s had a great season, down there this year in Regina. Most younger guys need extra strength so that’s something hopefully over the course of summer he’ll get stronger. And then it’s coming in and it’s just learning a little bit more about the NHL game. It’s more structured and more disciplined up here so kind of learning what’s going to be coming at him system wise… he’s a real confident kid who skates well, moves the puck well, so he’ll have every opportunity to come in here and show us what he can do in camp.”

On Ryan Winterton’s emergence as a prospect:

The Kraken will get a high pick in the NHL Draft this summer. Does Francis see players at the top of the Draft who may be NHL ready in year one?

“I think there’s potentially guys that can step in and do that. [You have to wait] till you get them to camp and see battles. It’s tough, but they have another summer to put that strength on but certainly there are guys that can do that. As tough as the year has been, the positive side is we’re going to get another higher pick and you look at teams, I think 16 teams in the last four years in the conference finals, 14 of them had two or more top 10 picks in the lineup. I think Tampa had six when they won Cups back to back so those guys are important to building a franchise and as much as we want to get the NHL portion right and get the right free agents to do that, it’s also critical for us to make sure we’re still drafting and developing well.”