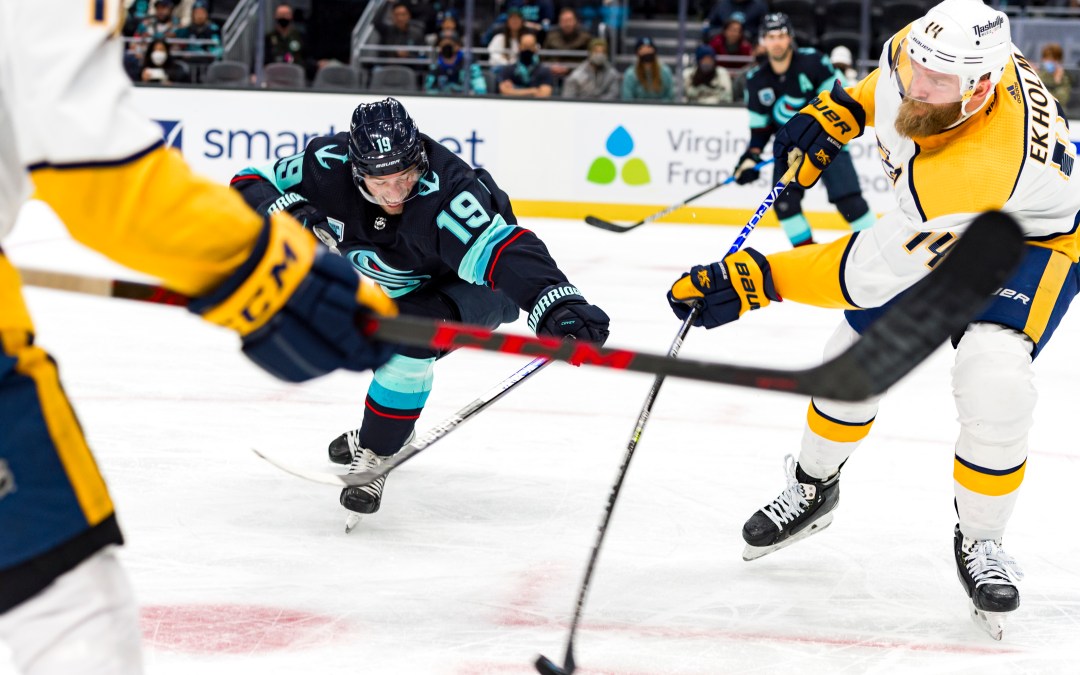 Is Wednesday the night that the Seattle Kraken collectively get off the schneid and finally get back in the win column? It feels like it’s been a loooooooooong time since we’ve seen the Kraken celebrating on the ice at Climate Pledge Arena, and that’s because… well… it has. It has actually been more than a month since the last home win. Yes, not only is Seattle on a seven-game losing streak, but the team has not had a victory on home ice since it beat the Florida Panthers way back on Jan. 23.

That’s a long time. It’s also the last chance for the Kraken to get a win on home ice before they go on a two-week road trip, so an already long home winless stretch could become much longer.

The good news for the Kraken is that they’re facing a team in Nashville that has been up and down of late, going 4-5-1 in its last 10 games. The Kraken have also looked much better in their last two and a half games, so here’s hoping they can put it all together for their fans on Kraken Day.

A weird day for the Kraken

Kraken Day got off to a very strange start for Seattle. Just before morning skate was scheduled to begin, team representatives notified media that the skate had been canceled and availability had been moved from in-person to Zoom.

We at Sound Of Hockey assumed the worst, but the news wasn’t as bad as it initially seemed, at least in terms of player availability. Coach Dave Hakstol indicated that the cancellation was only a matter of “readiness,” noting that the team has been on the ice a lot lately. The added precautions were the result of a “concern” with one of the members of the Kraken’s traveling party, as the team prepares for its long east coast swing.

Hakstol also stated there is no change in availability from Tuesday’s practice. Based on what he said and what we saw at that practice, we are expecting Kole Lind to draw in for Austin Czarnik, while Chris Driedger is expected to start in net for the Kraken.

On Tuesday, Morgan Geekie was elevated to the first line with Calle Jarnkrok and Jordan Eberle. Geekie scored in Sunday’s 3-1 loss in San Jose, his first goal since Dec. 11, and has generally played very well of late.

Before the game, Ukrainian singer, Roman Vashchuk, sang the Ukrainian national anthem, and the PA announcer said the Kraken denounce the recent actions of Russia.

The Kraken had a couple decent looks in the first period, including a great opportunity for Alexander Wennberg, which Juuse Saros denied with a diving glove save.

The Predators’ fourth line broke a scoreless tie at 13:13. Off a Roman Josi forecheck, Michael McCarron got the puck behind the net and passed it into the crease. Driedger got a piece of the pass, but then seemed to lose track of it a split second. Philip Tomasino was there and banged it through to make it 1-0.

That was the only marker of the first period, and Nashville went to the dressing room with a 1-0 lead.

The highlight of the period for us was seeing our good friend and co-founder, John Barr, being honored as the Starbucks Community Star.

With Yanni Gourde in the box for the game’s first penalty, the Predators made an elite play through the neutral zone. Ryan Johansen got to the Kraken blue line and didn’t like what he saw, so he bumped it back to Josi. Josi found Matt Duchene streaking across the blue line, and sent him in on a partial breakaway. Duchene buried it with a beautiful shot to make it 2-0.

The Kraken answered just 29 seconds later, though, and once they broke through, the floodgates opened. First, it was Wennberg getting revenge for the earlier robbery. Off a two-on-one, Marcus Johansson made a great pass around a sprawling Matt Benning, and Wennberg fired it home to bring Seattle within one.

A minute and a half after that, the Kraken got some extended zone time. Jordan Eberle found himself with the puck to the right of Saros. He passed to Calle Jarnkrok, who was being dragged down in the slot. While falling, Jarnkrok still got enough mustard on the shot to beat Saros and tie the game at 2-2.

The momentum continued to swing in Seattle’s favor, as they took their first lead at 10:02. Off a three-on-two, Colin Blackwell passed to Gourde, who scored his 12th of the season.

The Predators immediately took a timeout, which effectively stopped the bleeding for them. With things calmed down, they tied it at 3-3 at 14:36. Eli Tolvanen deflected a shot wide, but it hit the endboards and caromed back out in front. Driedger thought Tolvanen was going to shoot the rebound, so he slid back to cut that off. But Tolvanen whiffed, and it instead went right onto the stick of Duchene, who had a wide-open net for his second goal of the game.

That was a wild second period.

The Kraken regained the lead at 3:19 of the third period with a shorthanded goal. Off a dump in, Gourde won a puck battle with Filip Forsberg below the goal line. He got it out to Blackwell in front, who was initially denied by Saros. But Blackwell kept whacking away until the puck finally snuck over the line. The greasy goal made it 4-3.

That was all Seattle needed in the end, and the Kraken broke their seven-game losing streak.

See? We told you playing on Kraken Day would help!