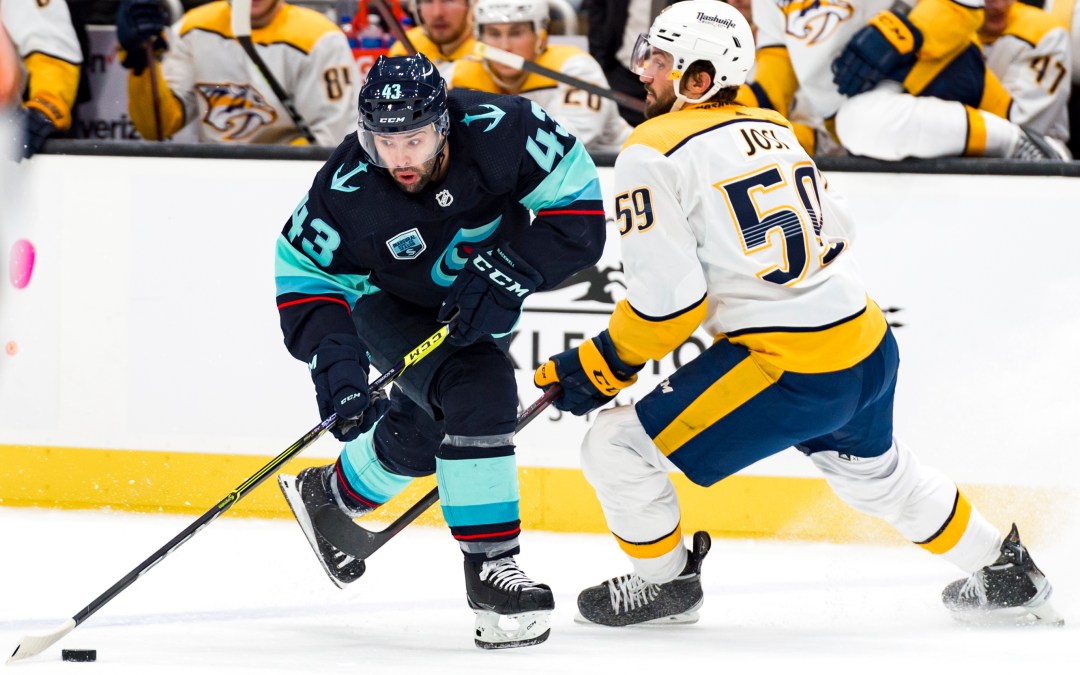 We just had a feeling this was coming. Every long losing streak has a “bottoming out” moment, where the team plays so badly, you start to think it might never win again. But it gets past that moment, then takes little steps toward the win column. We thought the bottoming out on this seven-game streak happened in the first 20 minutes of the Kraken’s game against the Islanders last Tuesday. They played much better in the second half of that game, then had two good performances against Boston and San Jose but didn’t get results. If they could just score a few goals, we thought Seattle was bound to get a win soon. Lo and behold, the Kraken knocked off the Predators 4-3 on Kraken Day.

Here are our Three Takeaways from Seattle’s first home win since Jan. 23.

Takeaway #1: …And then the floodgates opened

For the majority of this painful streak, the Kraken had that “can’t buy a goal” look to their game. They scored two or fewer goals in every contest but one, and that night, they fell 5-3 to the Winnipeg Jets.

On Wednesday, the team was playing decently through the first 26 minutes but again found itself trailing by two and staring right down the barrel of a potential eighth consecutive loss. But 29 seconds after Matt Duchene had extended Nashville’s lead, Alex Wennberg scored a nice goal off an even nicer Marcus Johansson pass, and suddenly the floodgates were open.

The Kraken notched three goals in the course of just three minutes, and Climate Pledge Arena got back that electric feel that has been so noticeably absent for the past month.

“It’s a great feeling, obviously,” said Wennberg. “It’s great too, it’s three different lines that go in and score, so I feel like that’s good for the team as well that you have everyone chipping in, doing their part.”

After the third unanswered goal, Seattle had all the momentum in the world. Nashville coach John Hynes astutely called a timeout, which worked wonders to settle things down. His team actually took back the momentum after Duchene scored his second of the period to tie the game at 14:36, but for the first time since the start of its seven-game losing streak, Seattle had more than three goals up its sleeve on this night.

Takeaway #2: Yanni Gourde and Colin Blackwell were the heroes

Coach Dave Hakstol has done plenty of line juggling this season for the Kraken, but one trio that seems to keep coming back together over the last few weeks has been Gourde, Blackwell, and Mason Appleton. The three feed off each other nicely, and Gourde and Blackwell played huge roles for the Kraken in defeating the Predators.

Blackwell passed to Gourde to contribute to the three-goal barrage in the second period, and Gourde then returned the favor in the third to set up the game-winning goal while Seattle was shorthanded.

We saw a massive celebration from Blackwell, after he was initially robbed by Juuse Saros but continued whacking away at the puck until it finally snuck over the line.

“That one felt good,” Blackwell said. “A team that I used to play for, those ones always feel good, like they may have given up on you or something along those lines, so scoring against them, and it was a big goal, a shorthanded goal, late in the period. That one definitely sticks out for this year and felt really good.”

That trio seems to enjoy playing together, and Hakstol seems to trust them together.

“Gourdo and Apps, I got nothing but good things to say about them,” Blackwell said of his linemates. “They’re really straight-line, hard-working players, and I thought we’ve had some pretty good chemistry together… The three of us complement each other pretty well.”

Added Hakstol: “With some of the injuries that we’ve had, that was a combination we went back to. They grind and they’ve taken on some of the heavy minutes in terms of playing against other teams’ top lines… They’ve done a good job of working hard together so as we go forward, certainly it’s a combination that we’ll consider holding and keeping together.”

Kole Lind has played just a handful of games with the big club this season and still has just 12 career NHL games under his belt. In six previous appearances with the Kraken, we didn’t find the 23-year-old winger to be particularly noticeable, but on Wednesday, he was everywhere.

He led the Kraken in shots on goal with five and had the second assist on the Wennberg goal, giving him just his second NHL point of the season and in his career.

“Lindy, he’s been in our lineup before, but coming back and getting an opportunity tonight on the right side with [Wennberg], those guys did a nice job,” Hakstol said. “Lindy was a good part of that. His puck management was good, I thought he was strong on the puck, was in good spots to support a lot of plays getting up ice and getting into the zone. He had a couple decent opportunities and might have missed the net on his best opportunity in the third period.”

For a team that is so thin on NHL prospects, it is good to see a flash of what the former second-round draft pick can bring in the future.

He also continues to kiss his netminder after victories, and we are big fans of this practice.

Bonus Takeaway: A memorable night off the ice at Climate Pledge Arena

Before the game, the public address announcer at Climate Pledge Arena stated that the Kraken condemn the aggressive actions that Russia has taken over the past week. The Ukrainian flag was projected onto the ice, and singer Roman Vashchuk was welcomed to perform a stirring rendition of the Ukrainian national anthem.

Vashchuk got a massive cheer after, as the crowd showed its support for the people of Ukraine.

“I thought that was definitely a very emotional way to start the game,” Blackwell said. “With everything going on, I think sometimes as hockey players we can be in a little bit of a bubble and not realize how good we have it. You know, there’s players that we play with from different countries that might not necessarily be as lucky as us, so to have that and have Ukrainian citizens be in our community, I think it means a lot for the city of Seattle to show that much emotion and stand with them tonight.”

That was another one of those moments in this inaugural season that got the goosebumps going, and one we won’t soon forget.

As if that wasn’t enough, one of our founders, John Barr, was recognized as a Starbucks Community Star for his work in helping to bring the NHL to Seattle. Knowing John, this acknowledgement was an enormous honor for him, and we are so appreciative of the Kraken for including him in the Kraken Day celebration.