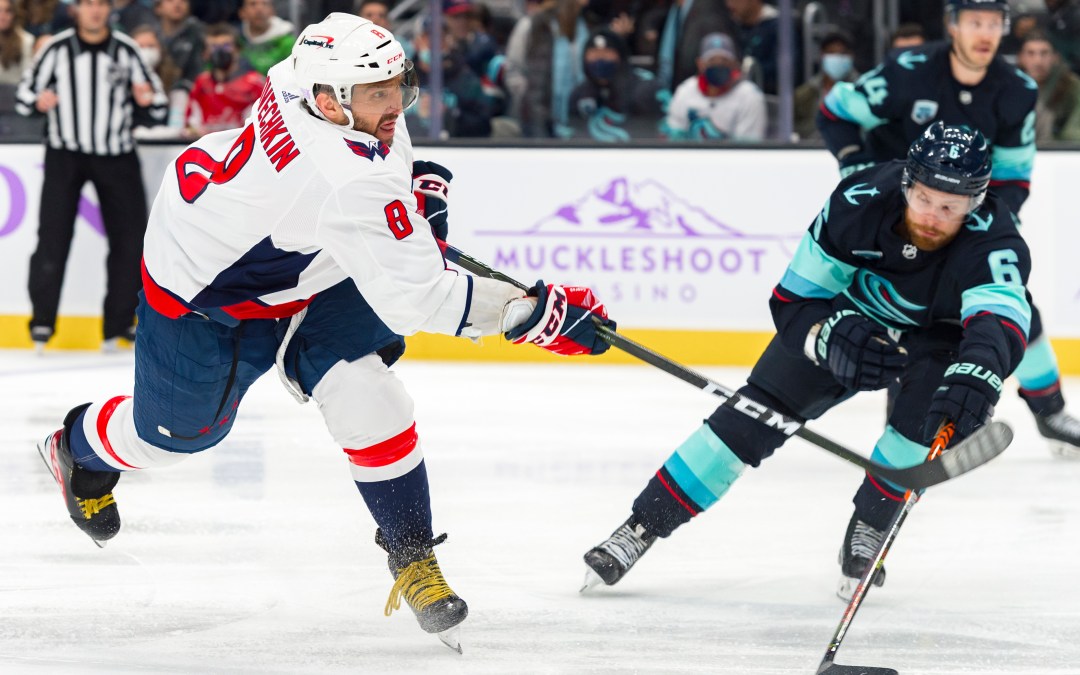 The return of Jaden Schwartz and leading scorer Jared McCann to the lineup Saturday didn’t make a difference, and the Seattle Kraken offense was stymied by the Washington Capitals during a 5-2 loss at Capital One Arena.

Washington scored twice on the power play while the Kraken were 0-for-3 and that’s what separated the two clubs.

“I thought 5-on-5, we did a lot of good things,” Schwartz said. “I think we controlled the play for the most part. Special teams? I think they might have been 2-for-2 or 2-for-3 on the power play and we were 0-for-3. So, that’s pretty much the difference in the game.”

Alex Ovechkin scored the dagger on the power play, 47 seconds into the third period when he found the net from his familiar spot in the left face-off circle to make the score 4-2. His one-timer was his 34th goal of the season and 764th of his illustrious career.

“He’s obviously one of the, if not the, biggest threats out there,” Joonas Donskoi said. “You always try to make plans, try and take him away but It’s not easy. And unfortunately, he was able to score one again today. So, it’s not an easy job, but I think there was a lot of things we could have done better.”

Ovechkin added two assists on the night, Sheary had two goals, and Tom Wilson had a goal and an assist for the Capitals (30-18-9), who won for the first time against the Kraken. Vitek Vanecek turned away 29 shots.

Colin Blackwell and Joonas Donskoi scored for the Kraken (17-35-5), who celebrated game 1000 for defenseman Mark Giordano. Chris Driedger made his second start in a row and made 20 saves.

“I really liked our work ethic throughout the entire 60 minutes,” Seattle coach Dave Hakstol said. “I don’t think we gave up 30 shot attempts at even strength tonight. So defensively, we played really hard… defensively we worked hard in terms of our play with the puck. We generated enough offensive zone time for sure. You don’t win a game because of offensive zone time but we had some opportunities out of that as well.”

It was a frustrating night for the Seattle offense which dominated the play at 5-on-5 by taking 62.5 percent of the unblocked shot attempts for the night. When it came to quality scoring chances at even strength, the Kraken excelled and had 55 percent of all shot quality.

“I thought five on five we did a lot of good things,” Schwartz said. “I think we controlled the play for the most part.”

Coming off a game where they scored four goals, three at even strength, the Kraken played well enough to score more, but once again, struggled to top the two-goal mark. Seattle is 27th in the NHL in goals scored averaging 2.55 per game.

At least for one night, the return of Schwartz, who logged 18:12 of ice time and led the Kraken with six shots on goal, did not lead to more scoring.

“My legs felt pretty good for being out so long,” Schwartz said. “Near the end of the shift, you could tell that you don’t have this the same jump after 30-35 seconds, so try keeping them short. But overall, the timing and everything was pretty good. I tried not to think about it.”

Schwartz didn’t land on the scoresheet, but he did create offensive opportunities, and the Kraken will hope that leads to more goals the rest of the season.

“I thought he was all over the puck,” Hakstol said. “I think we’ll look back at this on tape and find him around a lot of scoring chances. Somewhere affecting the play to create scoring chances. For his first night back and going on what has got to be close to 10 weeks, I thought his performance was really good.”

How the scoring played out

Wilson opened the scoring at 11:30 of the first period to make it 1-0 after he crashed the net, scooped up a loose puck and scored on a backhanded shot.

Washington doubled the lead, 2-0, 34 seconds later at 12:04 when Dmitry Orlov one-timed a pass from Nic Dowd from the top of the face-off circle.

Joonas Donskoi cut the lead to 2-1 at 16:56 with his second of the season. Riley Sheahan had a backhand chance that was stopped by Vanecek, but the rebound was free and Donskoi buried it for his first goal in 11 games.

Colin Blackwell continued his hot play with a goal to tie the game 2-2 at 58 seconds of the second period. He intercepted a Capitals pass at the Seattle blue line and turned up ice with Yanni Gourde, but Blackwell held it, fumbled it briefly, got it back, and scored on a wrist shot.

“Wasn’t worried about it going downhill and this group hasn’t gone downhill,” Hakstol said. “They haven’t gone away. I liked the response. I really liked our work ethic throughout the entire 60 minutes.”

Washington snatched the lead back, 3-2 on a Sheary power-play goal at 11:48 when he was able to knock in a bouncing puck on a rebound off Driedger.

+ Giordano became the 11th active defenseman to reach 1,000 career games, and only the second of that cohort to achieve the milestone while being undrafted, joining Andy Greene (1,030 GP).

+ The Kraken will play Sunday evening in Carolina against the Hurricanes.