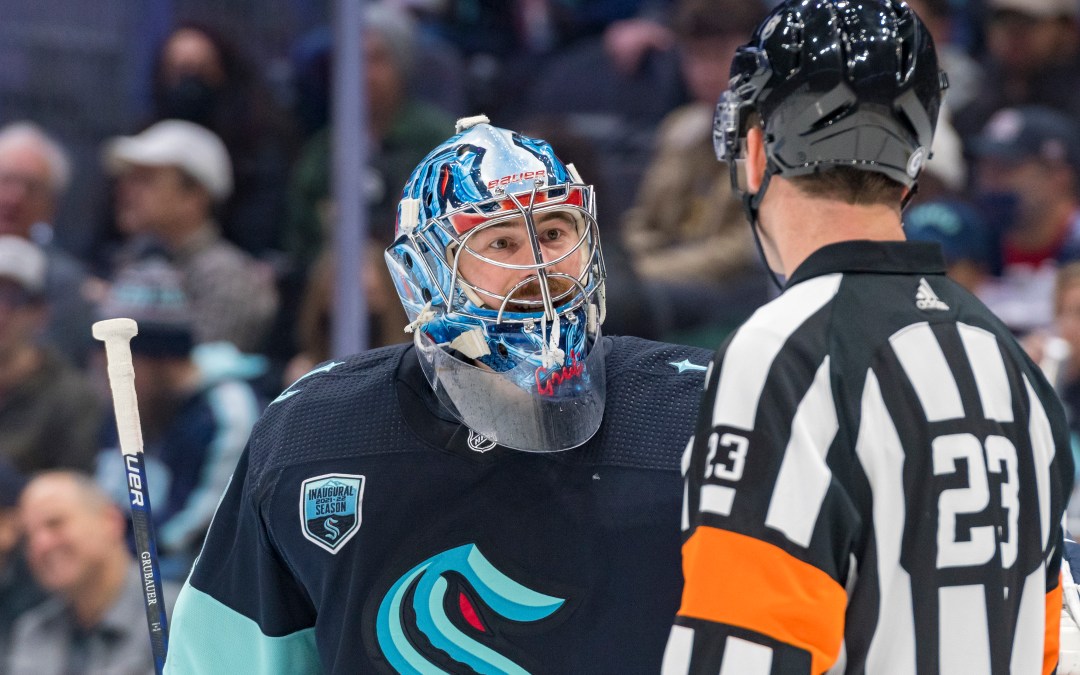 One nice thing about back-to-back games is that if your team loses the first one, you get to go back out the following night and try to make up for it. The Kraken have that opportunity on Sunday against the Hurricanes, as they look to bounce back from a hard-fought loss to the Capitals on Saturday.

The Kraken played a good game against Washington, but the special teams battle went 2-0 in favor of the Caps, and that was the difference.

Can Seattle get back in the ‘W’ column after snapping a seven-game losing streak two games ago? Let’s find out.

Against Carolina, Seattle faces another good team, but it did have success against the Canes in the first meeting between these squads at Climate Pledge Arena on Nov. 24. That night, Seattle fell behind 1-0 at the end of the first period, tied it in the second, and got a winning goal from Marcus Johansson with just 3:09 left to earn a 2-1 victory. Philipp Grubauer was outstanding that night.

Goalie Frederik Andersen is dealing with a minor injury, so Seattle will face Antti Raanta. The 32-year-old backstop has dealt with myriad injuries in his career, but he has been decent this season in 14 starts, posting a 8-3-2 record with a 2.50 goals against average and .909 save percentage.

The Canes are on a 10-game home point streak and are coming off a 3-2 win over the Penguins at PNC Arena on Friday. Watch out for Andrei Svechnikov and Sebastian Aho, who have 51 and 57 points respectively and drive the bus offensively for Carolina.

Bodies in, bodies out

Seattle got two important players back in the lineup Saturday in Jaden Schwartz and Jared McCann, both of whom were impactful in driving offensive opportunities for the Kraken, though neither found the scoresheet. The simultaneous returns meant the Kraken had to place Austin Czarnik on waivers, and Czarnik got claimed by his old team, the New York Islanders, on Sunday. Czarnik had two assists for the Kraken in six games.

The Kraken are bringing a similar look, except Johansson will skate with McCann and Jordan Eberle, and Calle Jarnkrok will move down to play with Schwartz and Alex Wennberg. Grubauer is in net.

There were some nice stops at both ends of the ice in the first period, but nothing doing on the scoreboard, so there’s not much to report here.

The Kraken had a slight advantage in shots on goal, but they weren’t getting much in dangerous areas.

The frame ended with the score tied 0-0.

The Hurricanes took their second penalty of the game early in the second period, this one for too many men. Early in the power play, Yanni Gourde shot from the right circle. The rebound got kicked by Jaccob Slavin right onto the stick of Alex Wennberg, who just lifted it over the outstretched pad of Raanta and made it 1-0 at 3:12.

Joonas Donskoi took a high-sticking penalty at 5:21. The Kraken penalty kill did a good job on the ensuing Hurricanes power play, but with 11 seconds left on the advantage, Nino Niederreiter scored a similar goal to Wennberg’s. Seth Jarvis shot from the right circle. Grubauer stopped it but lost sight of the rebound, and it rolled right to Niederreiter at the side of the net. Niederreiter deposited the puck to make it 1-1.

Just over a minute later, Adam Larsson made a world-class stretch pass from his own zone to the far blue line and hit Calle Jarnkrok in stride. Jarnkrok flew into the zone untouched and beat Raanta to re-establish Seattle’s lead, 2-1.

The Hurricanes got another power-play goal to level the score again at 17:22. With Wennberg in the box for hooking, Teuvo Teravainen put back a rebound off a shot by Aho and made it 2-2.

The interesting thing that happened in this period was Vince Dunn blocking a shot with his… uh… tentacles. He was down on the ice for a bit, while Carolina had sustained pressure, but eventually got up and dragged himself to the bench.

The period ended with the score level.

Soon after the Hurricanes killed an Aho penalty, they took their first lead of the game. Martin Necas found a loose puck in front, spun, and snuck it past Grubauer to make it 3-2 at 10:22.

The Necas goal would prove to be the game winner. Seattle again fought hard in this one, but didn’t produce enough offensively and came up short in the end.