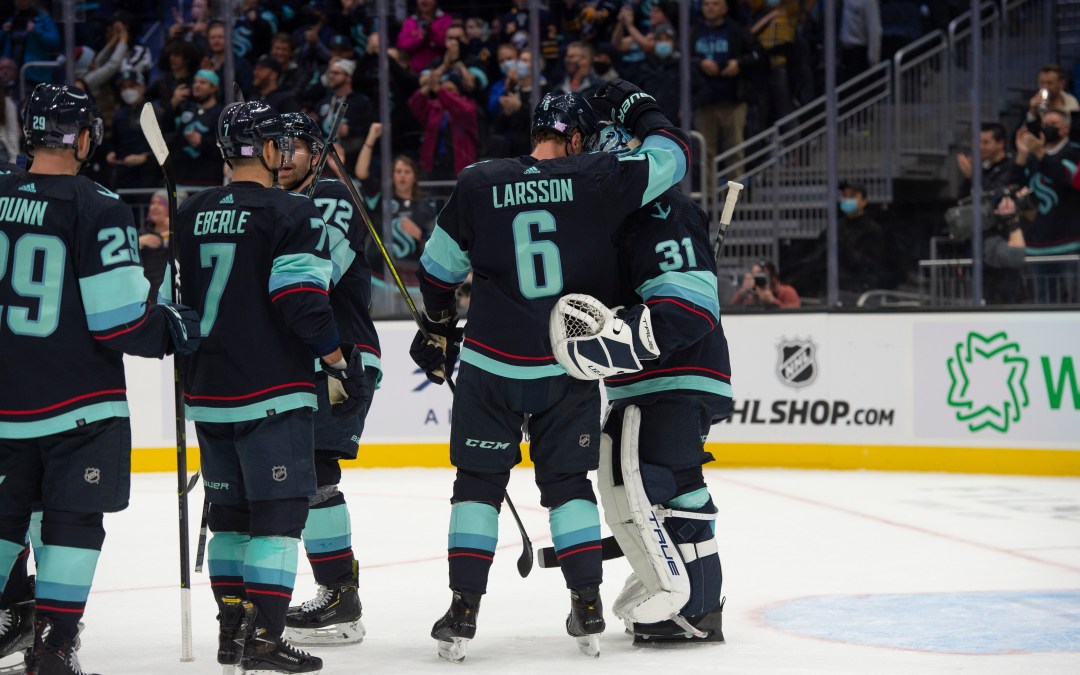 It was closer than it needed to be, but Philipp Grubauer put the Kraken on his back and ended their five-game road trip with a 4-3 shootout win against the Montreal Canadiens at the Bell Centre on Saturday.

He had the Kraken up 3-2 with time winding down and the Canadiens net empty. Then it happened. Adam Larsson attempted to knock away a puck from the Seattle net. He swung his stick and deflected it past Grubauer for a game-tying own goal at 17:48 to send the game into overtime.

“Shit happens, you know, it’s hockey,” Jared McCann said. “Sorry about my language. But, it’s just the way it goes, [Larsson] tried to make a play and everybody saw that so we were there for him. He’s done a lot of great things for us this year, so we just stuck with him. It was great to get the win for him.”

Seattle leaned on its goalie for four more saves in overtime, including a big-time glove save from in close.

“Reaction save for sure,” Grubauer said. “Not the ideal situation in, in overtime, to give that shot up but I made the save and we won the face off and went up the other way.”

Neither team scored in overtime and Grubauer would be tasked with shutting down seven shootout attempts before finally Marcus Johansson won it by lifting a backhand over Montreal goalie Sam Montembeault for the win.

“I wasn’t even watching on JoJo’s goal,” Grubauer said. “I had my head down… So, I don’t even know what he did. But he scored so I guess it was a nice move.”

Grubauer ended the night with 30 saves to send the Kraken (18-37-6) home on a happy note with a 1-3-1 record on the trip. Johansson had two assists to surpass 400 career points.

Montembeault stopped 32 shots and Alexander Romanov had a goal and an assist for the Canadiens (15-35-8), who failed to make up ground on the Kraken and pull out of the league’s basement.

“It was a pretty even hockey game and there was a lot of pace to it,” Kraken coach Dave Hakstol said. “At the end of the day there was pretty good goaltending at both ends of the rink, good opportunities at both ends of the rink, and it’s a good way for us to finish out the road trip. It’s tough to give up the lead but I didn’t dislike the way we played in the third. They played well and they had a good push. But, you know, I didn’t feel like we had any panic to our game at all.”

Gourde put the Kraken on the board with a shorthanded goal at 9:26 of the first period to make it 1-0. The Canadiens mishandled the puck coming out from behind their net and Gourde tapped in a loose puck for his 13th of the year.

Moments later, on the same penalty kill, Mason Appleton snapped a shot for another shorthanded goal, but the play was challenged and the goal was disallowed as Appleton was offside. It’s the second straight game Appleton has lost a goal to an offside challenge.

Montreal evened the score 1-1 at 14:50 in the first period after a scramble in the Seattle end put the puck on Michael Pezzetta’s stick in the slot. He fired and scored.

Ryan Donato gave the Kraken a 2-1 lead at 16:42 in the first when he scored after Johansson’s initial shot rebounded hard off the boards. It was the second straight game scoring for Donato.

Seattle extended its lead to 3-1 at 15:05 of the second period on a Jared McCann power-play goal. Johansson drove the puck behind the Montreal net and flung a perfect pass to McCann in the high slot where he would bury his team leading 23rd of the season and second in two games.

With the tally, McCann equaled his career high in points with 35 and power-play goals in a season with eight.

Romanov cut the lead to 3-2 at 1:04 of the third period with a point shot after another big rebound off the end boards.

At the start of the road trip, Seattle’s special teams were a struggle. The power play was not converting, and they gave up a host of power play goals against. At one point they had allowed seven out of 11 on the penalty kill.

The Kraken took too many penalties Saturday, giving the Canadiens six looks, but Seattle killed them all off and scored a shorthanded goal.

“Guys were good on the PK and they got their looks and believe me that’s where you know your best PKer has to be the guy in the pipes and Grubi did a really good job there,” Hakstol said. “We found a way to get a shorty. That another big point of the hockey game.”

+ Joonas Donskoi and Alex Wennberg missed the game due to injury. Donskoi had been placed on the injured reserve list Friday with an upper body injury.

+ Kole Lind was recalled from Charlotte of the American Hockey League. He started on the second line, but ultimately played just over 11 minutes in this special teams heavy game.

­+ Morgan Geekie had an assist Saturday giving him one in each of the past two games.

+ The Kraken will return to Climate Pledge Arena for a game against the Tampa Bay Lightning on Wednesday.