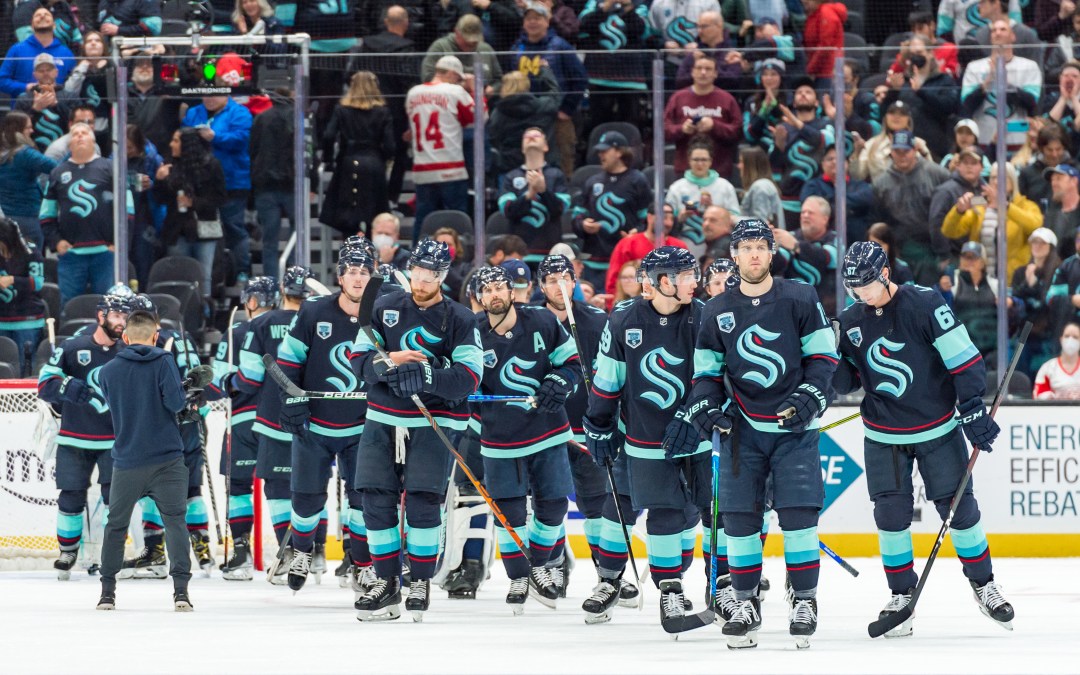 We’ve reached an interesting juncture in the season, when what’s happening off the ice has drawn more focus than what is happening on the ice. The Kraken entered Saturday’s contest against the Red Wings in danger of falling to last place in the entire NHL. Captain Mark Giordano was held out of the lineup for the second consecutive game (yes, we see the reports that he has been traded to the Maple Leafs, and we will have more on this Sunday), and Calle Jarnkrok had already been moved to Calgary. There’s no doubt most people paying close attention to Seattle’s season were more focused on the moves the Kraken may or may not make prior to Monday’s NHL Trade Deadline than on this game itself.

But on Saturday, the Kraken did not appear terribly distracted by the constant rumors swirling on social media and instead came out flying.

Here are our Three Takeaways from a fun—but sometimes maddening—4-2 home win for the Kraken over the Red Wings.

The Kraken might have played their best period of the season in the opening frame on Saturday. They dominated in nearly every aspect, and it took the Red Wings more than 11 minutes to register their first shot on goal.

Yet… somehow… when the horn sounded, the Kraken were still tied 0-0, despite the outstanding performance.

To his credit, Detroit goalie Alex Nedeljkovic played out of his mind and stopped all 16 shots he faced in the period, including two highway robberies on Morgan Geekie and Ryan Donato.

Still, the period was yet another stark reminder of the lack of offensive skill this Seattle team possesses. There just had to be a goal in that period, and instead, the Kraken left the door open for the Red Wings to take the lead in the second.

The Kraken had 59 seconds of five-on-three time in the second, after Lucas Raymond and Dylan Larkin took penalties in quick succession. Seattle’s poor power play failed to convert, and in incredibly predictable fashion, Detroit took a 1-0 lead just seconds after killing off the penalties.

The goal was an ugly one, too, as Vince Dunn skated the puck right into Donato, and together they lost the puck to Larkin, who found Joe Veleno for an easy tally.

Add in a power-play marker less than three minutes later, and it felt like we were heading toward another night of the Kraken finding a new way to lose.

Coach Dave Hakstol summed up the first two periods quite nicely after the game. “Our start was excellent. Second period, I really liked our first 10 minutes… We made two mistakes, one coming off of a power play, two guys got tangled up. We made a mistake there, and we made a mistake on the PK. In reality, on the PK, we didn’t get a clear, and we had two sticks at the scene of the crime, and they won that puck battle.”

Takeaway #2: A turning point save

When evaluating a goaltending performance, Hakstol often talks about getting saves at the “right times” in games. Philipp Grubauer wasn’t tested all that often Saturday, and got hung out to dry by his teammates twice in the second period.

With the score still 2-0 six minutes into the third, the Red Wings came in on a three-on-two rush. Tyler Bertuzzi put a perfect pass in Filip Zadina’s wheelhouse, and Zadina leaned into a one-timer. Grubauer read it, sprawled across, and made his best save of the night.

“If they get that third one, it’s a big uphill for us,” Adam Larsson said. “[Grubauer] has been great for us. We haven’t played great in front of him, but I think he has really stepped up his game lately.”

Added Hakstol, “That’s the one that gives us an opportunity. If it goes to 3-0, we don’t have an opportunity to dig out of that one, so that was a huge save at the right time of the game for our team.”

A minute and a half after Grubauer made that key stop, Larsson finally got the Kraken on the board for the first time, sneaking a shot just barely over the goal line behind Nedeljkovic. Suddenly things were rolling for the Kraken.

Just when you think you’re out, they pull you back in.

What has made these Kraken such a lovable losing team is their resiliency and staunch refusal to quit on games. As the teams took the ice for the third period, there was a feeling that this could be a night where Seattle might pack it in. After dominating the first half of the game, but somehow coming out of the second period 2-0, there was plenty of doubt in the building that the boys would overcome the two-goal deficit.

But Seattle never packs it in. As soon as Larsson scored, things started rolling downhill for the Kraken, and the Red Wings simply ran out of answers.

In the end, Yanni Gourde was the hero of the night. After taking a deflected puck to the cheek and rushing down the tunnel in the second period, he returned for the third looking bruised and battered. What did he do? Well, he scored the game-winning goal and added an empty-netter to seal the deal, of course.

“You may think that’s spectacular,” Hakstol said. “But if you hang around Gourde-o every day, you would just think it’s another day. It’s what he does. He’s a competitor.”