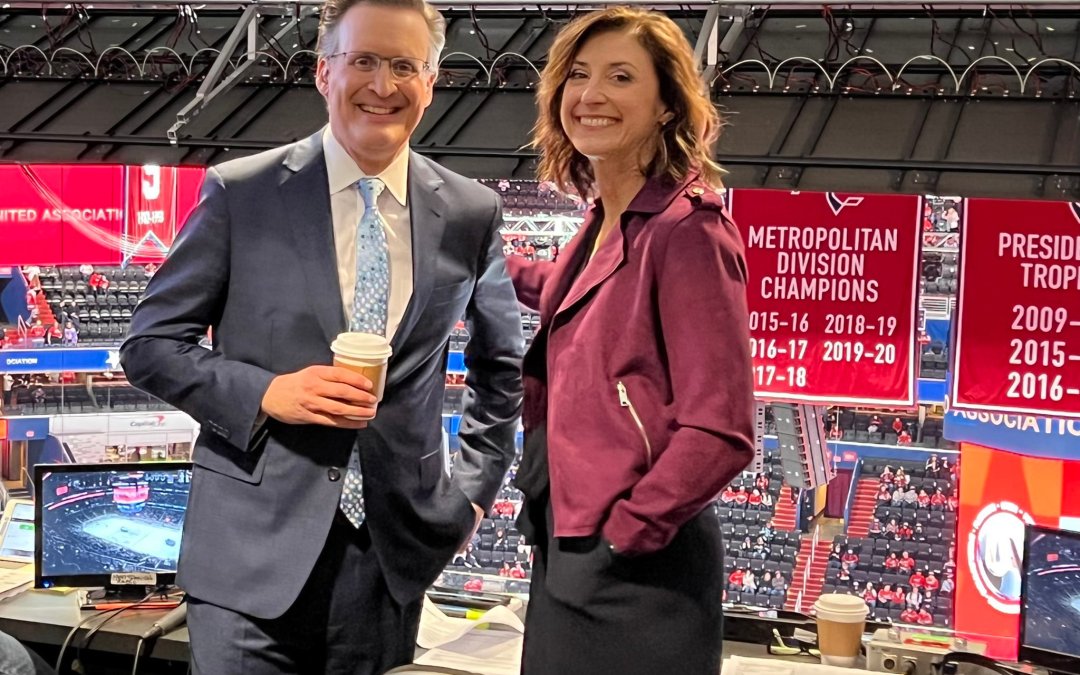 Be Alison. That was the most useful piece of advice that Alison Lukan received before going on the air for the Seattle Kraken’s game against the Washington Capitals on March 5. It was so important, in fact, that she wrote it down in a notebook and made sure to review it before hitting the airwaves for the first time in her temporary capacity as color commentator.

Lukan had never done color commentary before that game, and as she looks back on the experience, it’s just another unexpected high point in a wild roller coaster of a season.

Eight months ago, Lukan was in Columbus, Ohio, doing freelance writing on a variety of topics. Hockey was one of those topics, but not the only one, and while she knew that she would be continuing her writing career in some way, she wasn’t sure if she would be doing much hockey work during the 2021-22 season.

Never in her wildest dreams did she think that by fall of 2021, she would be a regular on a TV broadcast in the Pacific Northwest. And yet, here she is, charming a wider audience than she ever could have imagined and doing so by simply being herself and using her own voice.

Kraken senior producer Bob Condor was the driving force in recruiting Lukan to join the team’s budding digital media department. She figured she’d come in, continue to provide her distinctive stats-driven commentary on Seattle’s digital platforms, and that would be the extent of her participation.

But Condor had bigger ideas for Lukan.

“It was Bob who said, ‘Hey, do you want to do a screentest?’” she recalled. “I’m like, ‘What does that mean?’ And we end up going out to ROOT Sports, and [executive producer] Jon Bradford there ran my screentest. I didn’t know what I was getting into.”

At the screentest, Lukan learned how some of the basic broadcasting technology worked and how to interact with a producer speaking to her through an earpiece. Bradford then had her do a dry run, commenting on a Vegas Golden Knights playoff game from last season as a sample intermission segment.

“We had conversations and said, ‘Let’s give this a shot,’” she remembered. “Our first game was the preseason game against Vancouver, and I’ve never had to think about hockey as fast as that or been as crazy tired after. It was just— ignorance is bliss to go in and do it, but it was a blast, and we were off from there.”

Aside from helping her through the screentest, it was also Bradford who eventually gave Lukan the advice to be herself on air, a quality that has helped make her sound natural and engaging on broadcasts.

At the beginning of March, Lukan was visiting friends in Washington, D.C., and was planning to meet up with the Kraken when they began their two-week road trip with a game against the Capitals. She received an unexpected phone call from Seattle’s senior vice president of marketing, Katie Townsend, asking if she might be interested in filling in for color commentator, J.T. Brown. Brown had landed in COVID protocol and was no longer able to travel with the team.

Considering she had never done television in any form prior to the season, jumping all the way into an NHL broadcast booth to do live color commentary was a massive leap for Lukan. But she knew she had the right people in place to guide her through.

“It was only because I know the caliber of the team at ROOT that they would take care of me and help prepare me.”

Lukan also knew she wouldn’t be alone in the booth and would have a legendary play-by-play announcer to help her out. “If you have the opportunity to work with someone like John Forslund, he is going to shepherd you through the process. He’s going to cover up every mistake you make, and you’d be foolish to pass up an opportunity to stand alongside him anywhere professionally.”

One area in which Lukan knew she needed help was with players’ numbers. With such a short time to prepare, she did not have all the numbers committed by the start of her first game in the booth. But Forslund—the consummate pro that he is—certainly did know them and was able to smoothly cover any gaps in the commentary.

Though Forslund did assist Lukan by nudging the on-air discussion around a couple small hiccups, he raved about the work that she did. “Working with Alison was fantastic,” Forslund said. He wasn’t surprised that she filled the role with such grace, despite the circumstances. “Her love for the game has been evident for a long time. She has connected with our fans in a new market because of this, and in a new role as game analyst the transition was seamless. I enjoyed our time together, but most importantly our fans benefitted from her talents.”

A feeling of gratitude

Lukan knows that her rapid rise into the public eye here in Seattle is something that few get to experience, and she’s grateful to those who have helped her through it. From her ROOT Sports producer, Scott Malone, to Forslund, to Brown, to Condor, to Bradford, to rinkside reporter Jen Mueller, Lukan knows a lot of people have supported her and helped her earn the trust of the fledgling fanbase. Heck, even the fans themselves have been instrumental in telling Lukan what information they need from her.

“The fans in Seattle and of the Seattle Kraken are incredible. I love how they’re willing to advocate for themselves when they need more information or when they have the information to have intelligent discussion.”

She also has an even deeper respect now for the work that Brown does in the color commentator role. “I have been blown away by J.T.,” she said. “I think that particularly when you compare his commentary to other former players on television, I am impressed with his ability to go beyond the ‘get pucks deep’ and ‘fight hard’ and all of the cliches. He really gives us a window into what players are thinking about and what they are doing.”

Now that she’s finished her four-game stint filling in for Brown, Lukan has happily returned to her more regular roles doing intermission analysis and digital content. She has no intention of ever becoming a full-time color commentator, but then again, she never expected to be on TV in the first place. Regardless, she will never forget the experience.

“I enjoyed the hell out of it. It was a blast, and I’m just so thankful I had the opportunity to do those four games.”

Lukan is living proof that being yourself can lead you to opportunities you never thought were possible.