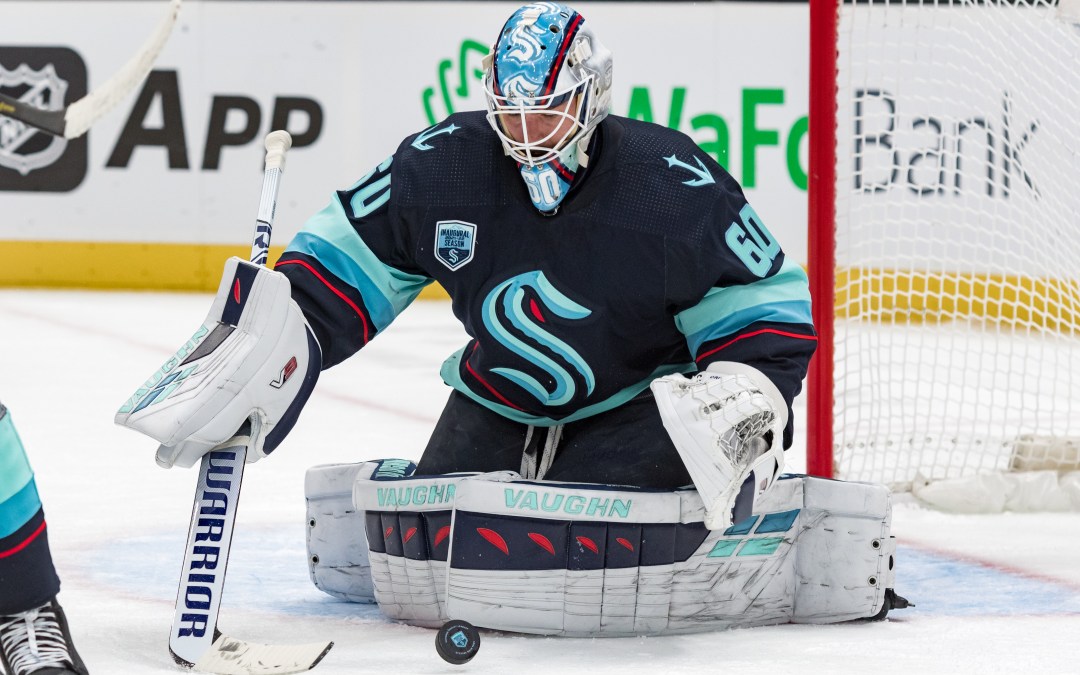 Before midweek back-to-back games Wednesday in St. Louis and Thursday in Chicago, the Seattle Kraken got in a quick practice Tuesday morning at the Kraken Community Iceplex.

Quick was the key word as the team skated for about 35 minutes so they could get on a plane Tuesday afternoon headed for St. Louis.

“Trying to take advantage of the minutes and make sure we’re taking the time that we need, but also not trying to overdo it,” Kraken coach Dave Hakstol said. “If you look at our game in the last couple of weeks here, we’ve played a pretty simple game. We’ve played hard so we’re just trying to continually reinforce the basic areas systems-wise. We can do that by touching on one or two drills, whether it’s morning skate or practice or by doing it through a little bit of quick video before and after practice and games.”

Entering the game against St. Louis on Wednesday, the Kraken are 5-4-1 in the last ten including wins over the Dallas Stars and on the road against the Los Angeles Kings, two teams either in the playoffs or fighting for a spot.

A familiar face at practice

Defenseman Cale Fleury was in Charlotte Monday,  getting ready to tee off at a team golf tournament when he got the call that the Kraken were going to bring him up to Seattle. He finished the front nine before leaving the course to pack and get on a plane to Seattle.

“I think it should be good to kind of help set myself up for the future here and kind of show guys what I can do,” Fleury said. “I think I performed pretty well last time I was up here. I felt like I fit in pretty well and I think it’s just kind of a confidence thing coming into the spot.”

Seattle has been playing the last couple of games with no healthy scratches as Haydn Fleury and Jaden Schwartz continue to be out with injury. There was no update on the injured players from Hakstol, but having Cale Fleury with the big club gives the team some insurance.

Hakstol hinted that we might see Cale Fleury in one of the two games during the week.

“Cale was up earlier in the year, did a really good job,” Hakstol said. “When we were in Boston and New York he played with a lot of poise at that time. He’s gone back, and he’s been a top guy in Charlotte and done a really good job there and helped them to a real good playoff position. He’s earned the opportunity to come up and play and get a good opportunity to get in on this road trip.”

With the Checkers in the AHL, Fleury has scored seven goals, with 26 assists and 33 points through 58 games.

His brother, Haydn, did not practice on Monday but did last week with a no-contact jersey and had a long workout in the morning prior to Friday’s game with Vegas. It’s unknown if the two Fleury brothers will play as a pair as they did when Cale was called up earlier in the season.

“Obviously, it’s always good even when we can see each other,” Cale said. “I like when I can stay at his place when I’m here, especially with his young kid.”

Hakstol didn’t give any hints to what his lineup will look like in St. Louis, but the forward lines at practice Monday were the same as they were for Sunday’s win against the Stars.

The coach was mum about which goaltender would get the call first. Both have been playing well, especially Chris Driedger who has started three out four games and won twice. He was especially good in the third period on Sunday when he made 13 saves to preserve what was a one-goal lead for most of the frame.

“Driedgs is coming off of a performance where he battled hard and he got the win,” Hakstol said. “That’s a good situation going into the next game, so we have a decision to make… That’s their job, to make that decision a difficult one and then my job is to make the choice as to who is starting.”