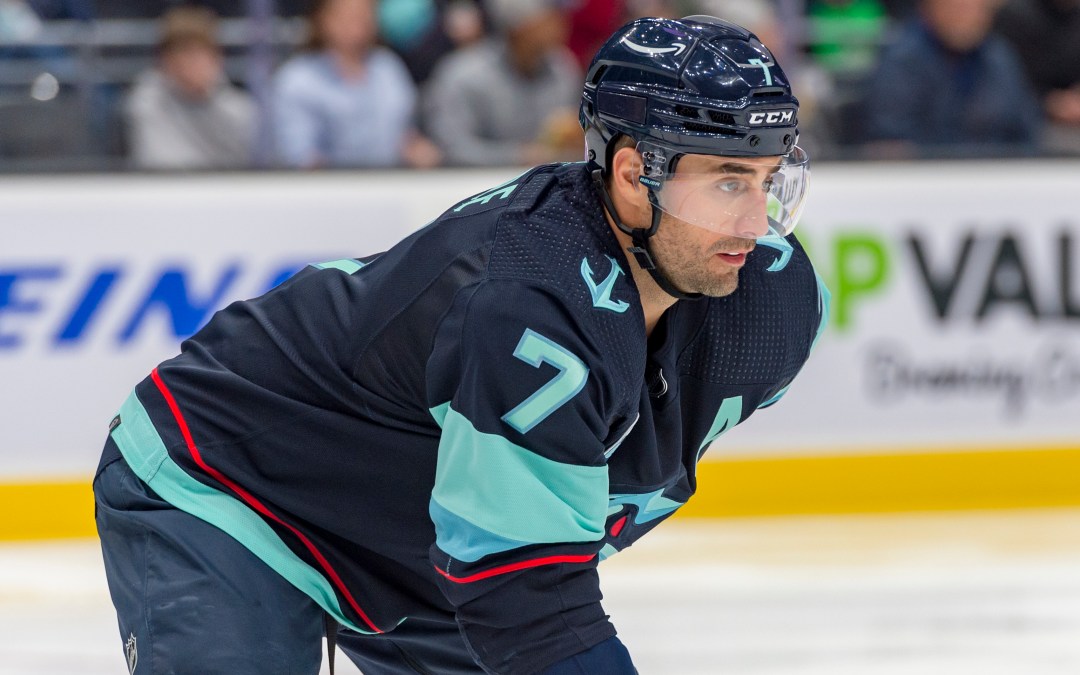 Kraken goalie Chris Driedger did what he could Wednesday night, but his mates couldn’t find the offense in support of him. Driedger, making his fourth start in five games, kicked away 32 shots, but it wouldn’t be enough as the St. Louis Blues outlasted Seattle in a 4-1 win at the Enterprise Center.

Driedger gave Seattle (22-41-6) a chance, but the Kraken took too many penalties and could not cash in on opportunities against the Blues and goalie Ville Husso who turned away 28 shots.

After Jordan Eberle pulled the Kraken to within 2-1 in the second period, Jordan Kyrou delivered what would be the deciding blow at 2:34 of the third period. With the puck bouncing in close, Kyrou would knock it out of the air and past Driedger for his 23rd of the season and gave the Blues a two-goal lead at 3-1.

“Batted it out of the air,” Driedger said. “It’s kind of a tough one to read off a couple guys and it just pinballed around you. Good hand-eye by him. Tough to react to that one when it’s right in front of you. Obviously want to stop them all so would have liked to have that one, but unfortunately it didn’t work out that way.”

The Blues entered the game with the NHL’s second ranked power play and got seven looks with the man advantage Wednesday. Seattle killed off six of those chances thanks to Driedger’s play, but killing that many penalties takes a toll on a team and disrupts flow and line combinations.

“When you have to kill seven minor penalties thats takes a lot of energy,” Kraken coach Dave Hakstol said. “Our killers did a good job tonight, but it’s seven power plays to none until very late in the third period, that tilts the ice.”

Brayden Schenn had two assists and St. Louis (39-20-10) got goals from four different scorers to pull the Blues within one point of the Minnesota Wild for second place in the Central Division.

Eberle had the lone goal for the Kraken and Ryan Donato set a new career high in points after picking up an assist. While the final deficit read three goals, the Kraken played better than that might indicate.

They took 57 percent of the unblocked shot attempts at 5-on-5 but were unable to capitalize in what is a familiar refrain this season.

“We had opportunities, that wasn’t a problem. We had chances to score,” Eberle said. “You got to finish those but at the other end, we gave up too much and Driedgs was there and played well. Driedgs was there to make a lot of saves. I think we got to tighten up defensively and just dial it in a little bit offensively.”

A harbinger of how the game would go, Driedger and the Kraken penalty kill had to endure three St. Louis power-play chances in the game’s opening nine minutes. They almost got through it and had several chances themselves to score shorthanded. But after one such chance, the Blues got the puck going the other way, had numbers, and Robert Thomas cashed in at 8:38 of the first with a wrist shot to Driedger’s right to make it 1-0.

“We had a good kill going,” Hakstol said. “We had a couple good opportunities, and we got a little bit greedy and that led to a quick breakdown. That was a huge momentum piece in the game.”

It was the only shot that the Blues garnered on the power play while Seattle managed three.

The Blues doubled their lead, 2-0 at 7:56 of the second after Schenn’s cross-ice pass found Justin Faulk at the back door with an open net waiting for him.

Eberle cut the lead to 2-1 with a goal on the doorstep at 9:55 after Will Borgen’s shot rebounded off bodies in the crease.

“Tonight is disappointing,” Hakstol said.  “I’m not sitting here saying I’m not disappointed because we didn’t come here to lose close. Seven minor penalties is too much. I would like to have had another opportunity or two on the power play that I felt like we earned with some of these close, close calls. But that being said, there’s things that we can do better. We’ll look at what we expect ourselves to do a little bit better in those areas for the back-to-back tomorrow night in Chicago.”

+ Donato’s assist on Eberle’s goal was his 26th point this season which eclipsed the 25 he totaled in 2018-19 between the Boston Bruins and Minnesota Wild.

+ Thomas tallied to extend his point streak to seven games (4-8—12) and establish a new career high.

+ Seattle defenseman Cale Fleury played his first game since being called up from the American Hockey League’s Charlotte Checkers Wednesday. He totaled 13:44 of ice time.