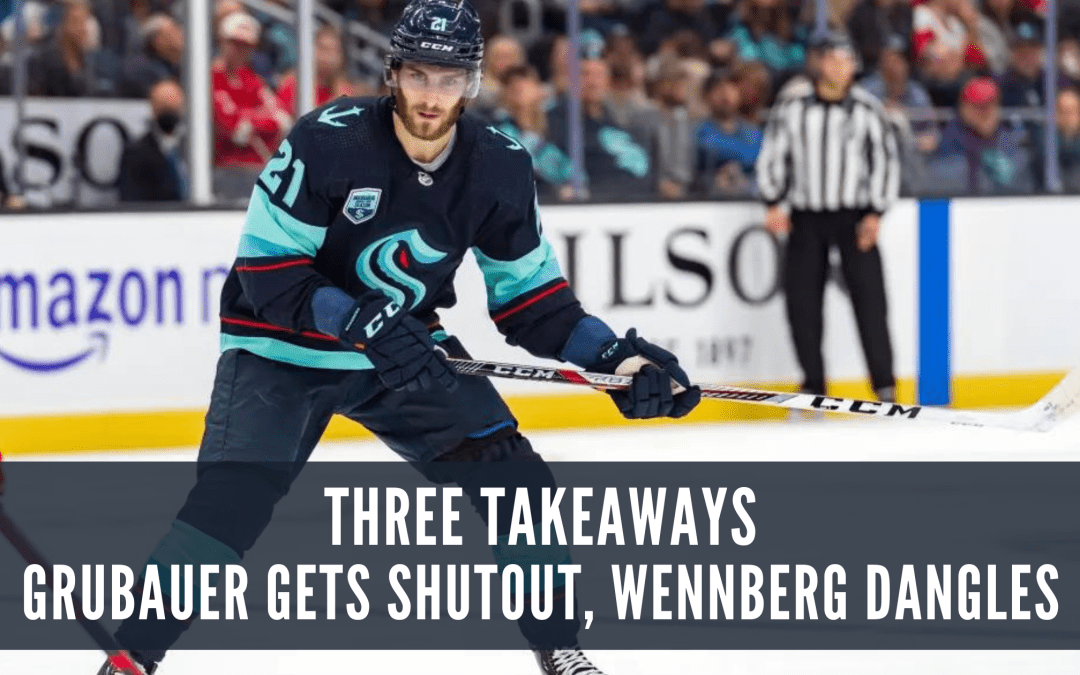 It’s been a while since we’ve been able to get a Three Takeaways story out to the masses. Putting one together after a 2-0 Seattle Kraken road victory over the Chicago Blackhawks—a win that also sealed the season series—sure does feel like a nice way to get back in the groove.

The Kraken came out flying on Thursday and dominated the first period, but predictably failed to register a goal in the opening frame. Things evened out as the game went on, but thankfully Alex Wennberg scored a stunning goal, Jordan Eberle added some late insurance, and that was all Philipp Grubauer and his thieving posts would need to sneak past the bumbling Blackhawks.

Takeaway #1: Grubauer earned his shutout, got some help from his posts

Grubauer got the 20th shutout of his career and second of the season, stopping 29 shots along the way. He only faced three shots in the first period, as the Kraken did everything right (other than score), but the play really ramped up in his end in the second and third.

He came up large on several occasions, including in the first shift of the game, during some tough penalty kills, and in the closing minutes when he was without a stick and facing six Chicago skaters.

“We dominated the first period, but first shift of the game, he’s gotta face [Patrick] Kane in a point-blank situation. That’s a great save,” Hakstol said. “We get through the kill and the situation at the end of the second period, and right at the start of the third, as [Carson Soucy] comes out of the box, now he’s gotta face [Alex] DeBrincat coming down the right side. So those are a couple of saves that were really important. He looked real confident tonight.”

Grubauer also got a bit lucky late in the game when Kane and Seth Jones rang back-to-back shots off the right post. He calmly and quietly thanked the iron for its service by giving it a soothing pat with his catch glove.

As the end of the second period started coming into focus, Ryan Donato took the game’s first penalty after he interfered with Taylor Raddysh right off an offensive-zone face-off. Then, just off the ensuing face-off at the other end, Soucy caught Raddysh with a high stick and drew blood, meaning Soucy would sit for four minutes. It was an interesting four seconds for Raddysh (ironic, since radishes are inherently boring) but a bad situation for the Kraken.

Seattle’s PK unit came up huge in killing 1:56 of five-on-three time, thanks to some textbook positioning and shot blocking. It then followed that up with an aggressive five-on-four kill that almost resulted in a short-handed goal for Jared McCann.

“We got a clear off the initial draw,” Hakstol explained. “That builds momentum for the penalty kill, and the five-on-three really stands out. The guys did an outstanding job there.”

Grubauer thought the PK effort carried over from Wednesday night in St. Louis, when the Kraken spent way too much time in the penalty box. “Even yesterday, I think we gave up one [goal], but we killed off eight minutes,” he said. “Today too, five-on-three, huge part of the game. We did the right things, we pressured at the right times, we blocked some shots, we were in the lanes… PK, hell of a job today.”

Feast your eyes on this dazzling dangle from Alex Wennberg.

The eventual winning goal broke a 0-0 tie early in the second period. Wennberg picked up a loose puck at the blue line and faked a shot. Jake McCabe bit on the fake, hook, line, and sinker, and looked like his feet had frozen into the ice. Then, with a head of steam built up, Wennberg swung around the temporarily frozen McCabe and made goalie Kevin Lankinen look equally silly before calmly depositing the puck into a yawning cage.

“Little mini-breakaway, good fake,” Grubauer said. “As a goalie, you gotta stay patient. [Wennberg] cut across and did a really great job faking out the goalie and put it in the net. Great goal, made us win the game.”

Said Wennberg, “I got a little speed, so I was going to fake the shot, and just see if I could get the space, and I feel like I really found a way to beat him around. And then after that, it goes fast. You just trust your instincts.”

Ok, well, then it’s safe to say that Wennberg’s instincts are pretty good, because that was certifiable filth.

Will we see Matty Beniers on Saturday when the Kraken welcome the Calgary Flames? We shall see…