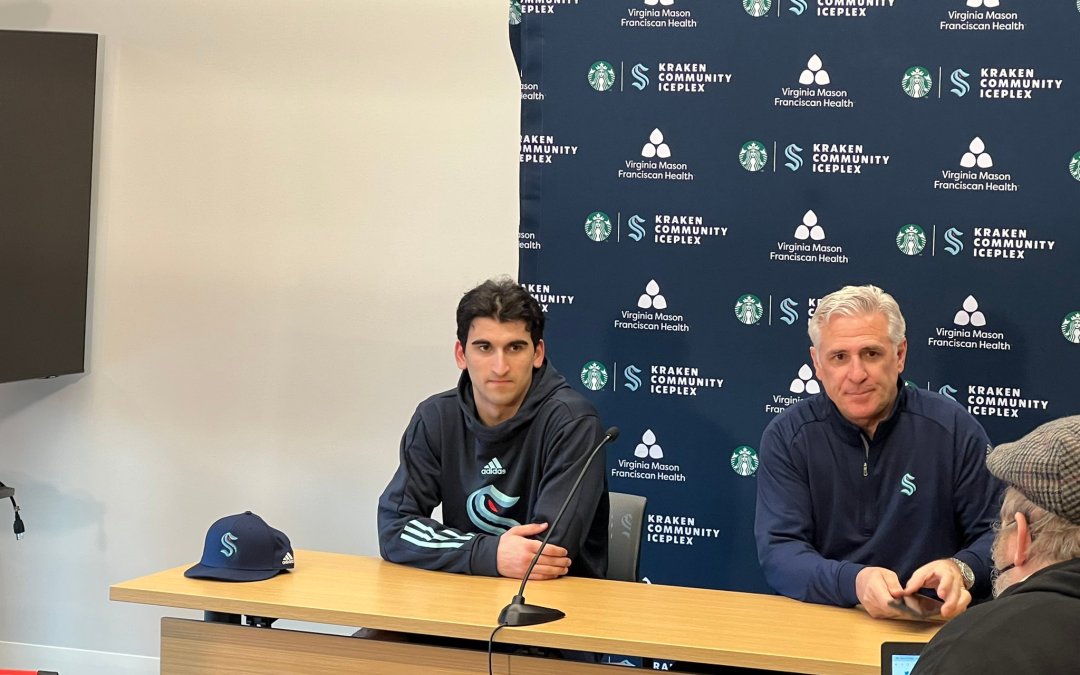 Seattle Kraken coach Dave Hakstol walked into a packed media room at Kraken Community Iceplex on Monday, looked at the many reporters and cameras that had assembled there, and said wryly, “Looks like everyone is excited for Game 73.” When general manager Ron Francis walked into the room a few minutes later, he shared a similar sentiment to Hakstol, joking, “This is more media than [at the NHL Trade] Deadline.” Was anticipation for Tuesday’s largely meaningless game in Calgary the reason for all the media attention on this random Monday morning in April? Perhaps. But the more likely explanation for the sudden local sports spotlight was the arrival of No. 2 overall draft pick, Matty Beniers, who made his debut in Kraken colors at Monday’s practice.

The on-ice session, which was open to the public, had a different kind of buzz than most practices for the Kraken this season. Although open practices have always been well attended, the bleachers were filled to the brim for this one, as late-arriving fans wandered around trying to squeeze themselves into the few remaining spots on benches. Meanwhile, team employees assembled in bunches around the office windows that overlook the primary practice rink, hoping to get their first in-person glimpse of Seattle’s prized prospect.

When Beniers finally stepped on the ice, a loud cheer rose up through the crowd. He spent the next 45 minutes participating in line rushes and power play walkthroughs, and doing all the things that an NHL player does during an NHL practice.

In those rushes, Beniers centered a line between NHL All-Star Jordan Eberle and fellow Boston-area native, Ryan Donato, with whom Matty already has familiarity.

“[Eberle] is a great player. I was fortunate to be out there with him,” Beniers said with a chuckle. “It’s pretty cool, obviously, coming from college and you’re right out there… I also played with Ryan Donato too out there, and I kind of grew up with him a little bit. He was always around, and I’d work out with him, so it’s really nice to have him by my side too because he’s a familiar face, and I’m pretty comfortable with him.”

When will Beniers make his NHL debut?

Hakstol played it coy on whether Beniers would make his NHL debut during the team’s road trip to Calgary and Winnipeg and urged that expectations be tempered for the 19-year-old. “Let’s just slow down,” Hakstol said. “My big thing for [Beniers] is to be able to come into our dressing room, become comfortable in that environment with his teammates, work hard every day, and enjoy the process of adjusting to this level.”

Still, all signs seem to be pointing toward a debut on Tuesday against the Flames, as Beniers himself confirmed that his family will be in attendance for that contest.

Whether that first game does come on Tuesday or some other night, Beniers thinks he will be ready for the challenge and excitement of the moment. “I don’t think I’ll have a ton of nerves,” he said. “I think once the game starts, it’s hockey. I’ve been doing it for my whole life, so once you kind of get on the ice and the game starts to get going, you really forget about it.”

Francis recalled his own very hectic first week as an NHL player, in which he bounced back and forth between the OHL and the NHL, and confirmed the team has no intention of doing anything like that to their young blue chipper. “We want to make sure we give him every opportunity to be successful,” Francis said. “You grow up your whole life dreaming about playing in the National Hockey League, and you only get that one opportunity to play your first game, so I’m sure he’ll be excited about it. We’re looking forward to having him wearing that Kraken jersey No. 10 and seeing him out on the ice.”

+ Haydn Fleury was present and accounted for at practice, but was wearing a red non-contact jersey and a tinted visor. Fleury has not played since Seattle’s March 22 win against the Arizona Coyotes.

+ Kraken team dog, Davy Jones, also came out to celebrate the arrival of Beniers. Davy has officially grown up way too fast.

+ Hakstol was asked about the play of Karson Kuhlman, who has carved out a consistent lineup spot for himself since returning from injury a month ago. The Kraken coach heaped high praise on the hard-working forward. “He’s the epitome of an every-dayer. And that’s the best compliment I can pay any player. He shows up and he works and he does his job and he does it very very well day in and day out. He’s a guy that you can play in a lot of different situations. He’s very reliable defensively, but not just because he’s defending. He’s a guy that can get you out of your zone and make the guys on the other side have to defend.”