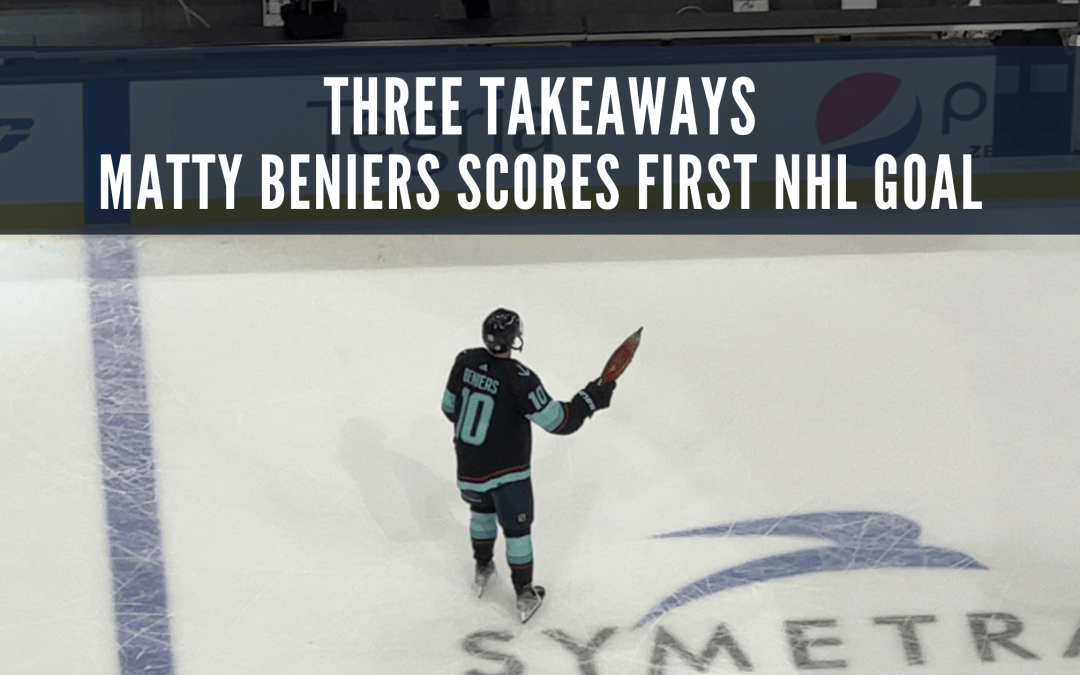 Where were you when Matty Beniers scored his first NHL goal?

Saturday night at Climate Pledge Arena was one of several from this inaugural season that will stick with us for a long time. The Kraken gave up a goal to the Devils just 3:12 into the game, but bounced back thanks to the play of Beniers, Jared McCann, Philipp Grubauer, and others to earn a 4-3 shootout win.

The legend of Matty Beniers grew tenfold on Saturday. Making his home debut with his family in the building, the much-hyped rookie registered his second point in as many games and banged home his first NHL goal.

With the game tied and the Kraken on a power play in the second period, Vince Dunn shot from the left point. Jared McCann deflected it past Nico Daws, and it hit the post before rattling around in the crease. Beniers jumped on it and authoritatively fired it it into an open net.

“It was a great feeling,” Beniers said. “I kind of just jumped into Canner’s arms after that.”

After leading the “fly-by” for high fives, Beniers returned to the bench and got a hearty round of congratulations from his teammates and coaches. And when the goal was announced in Climate Pledge Arena, the crowd gave a chill-inducing standing ovation that was among some of the loudest moments we’ve heard this season.

We asked Beniers after the game if he’s ever gotten such an ovation. “No, definitely not. No standing ‘O’ like that. It was pretty amazing. I couldn’t help but smile.” And the warm welcome from the home fans didn’t just come after Beniers scored. “When they were calling names of who started, they called my name, and they went nuts, and then after the goal, it was electric.”

While the goal was exciting because of the milestone and because it gave Seattle its first lead of the game, it was probably one of the easier ones Beniers has scored in his hockey career. More impressive were the plays that Beniers didn’t score on during overtime.

With just over a minute left in the extra period, Beniers rushed into the zone and down the right halfwall. He scooped up the puck with his stick blade, juggled it while skating around Pavel Zacha, then drove to the net and forced Zacha to take a penalty. Then, on the ensuing power play, Beniers tried to go between his own legs to score from the net mouth.

Neither play resulted in a goal, but a 19-year-old kid playing in his second career NHL game and pulling moves like that is something to behold.

It’s Beniers’ complete, two-way play that has coach Dave Hakstol most impressed, though. “Most importantly, as a centerman, he does a very good job in the defensive zone being in the right spots,” Hakstol said. “The creativity is there. As his confidence grows, we’ll continue to see more and more of that offensive creativity.”

Though we’ve seen him in practice, that’s the first time we’ve gotten to watch Beniers play a game in person. He did not disappoint. The obvious tangibles are certainly there; he clearly has the skill and speed to compete in this league. What really strikes us, though, is the poise with which he carries the puck, and the confidence he is clearly playing with right now, despite such a minuscule amount of time in the NHL.

Beniers finished his first home game with a goal on three shots, 18:14 of ice time, 2:19 of power play time, got two LOUD standing ovations, and was named the No. 1 star of the game. Not too shabby.

By the way, by earning the No. 1 star, Beniers also got to do his first career fish toss. We asked him how he thought he did. Initially, he said he thought he did a pretty good job, but then he rethought the answer and said, “I was aiming for a little kid, but I think I overthrew it a little bit. I didn’t see if he got it. I hope he did.”

We have video evidence proving that, in fact, the little kid did not get it. Still, it made a fan pretty happy.

Beniers was the story Saturday, and with good reason. But if it weren’t for McCann, the Kraken would not have won the game.

Streaking into the zone, McCann received a pass from Yanni Gourde in the second period and quickly sensed that he had drawn the attention of all the Devils defenders. He spun and made a deft pass to Carson Soucy, who was left wide open in the slot. Soucy had all the time in the world to pick his spot and bury the puck behind Daws.

“I look at the play that he made on the Soucy goal, in tight spaces, having the ability to find Souce coming down the middle in that soft area, I felt like that was one of the most important momentum swings of the hockey game,” Hakstol said. “Those are the kinds of plays that we need Canner to make.”

“We’ve kind of been better at just creating off the rush,” Soucy said. “Our forwards made some unbelievable plays tonight, even on [Will] Borgen’s goal too, driving to the net. I think just using their speed, just being a threat and then looking for the late guy if that’s an option. I think our forwards did a good job, especially McCann on that last play.”

And while Kraken fans were going gaga over Beniers’ first goal, it was McCann who actually got the puck past Daws by tipping Dunn’s shot off the post, before it ricocheted through the crease.

Again, we recognize that the night belonged to Beniers, and rightfully so. But we wanted to make sure McCann got some credit, because he was a big driver.

Takeaway #3: We can’t forget about Grubauer’s big save in the second

In the second period, the Devils got two power plays in a row when Dunn hooked Jesper Bratt at 7:51, then Jamie Oleksiak held Tomas Tatar at 10:55. The Kraken penalty kill did a good job, but they definitely needed the help of Philipp Grubauer, who came up big during that stretch and prevented the Devils from extending their lead.

After a point shot, Bratt swatted a rebound toward Zacha. Soucy took a swing at it but whiffed, and Zacha appeared to have Grubauer dead to rights. But the German Gentleman sprawled to his left and just got his toe on the shot, robbing Zacha and keeping the score at 2-1.

The second it happened, we thought that could be a turning point in the game, especially if the Kraken completed the penalty kill (they did). Sure enough, Soucy scored the tying goal at the other end a couple minutes later, and suddenly you could sense a Kraken victory on the horizon.

“Grubi’s game was really solid,” Hakstol said. “The first real good opportunity is a great shot that ends up in the back of the net. And that didn’t shake Grubi at all, didn’t rattle him. He played a real solid game all the way through the 65 minutes and then through the shootout, so kudos to him.”

In all, Grubauer stopped 23 of 26 shots, which doesn’t sound *that* impressive on paper, but he was an enormous part of the Kraken victory.

That was a fun night.