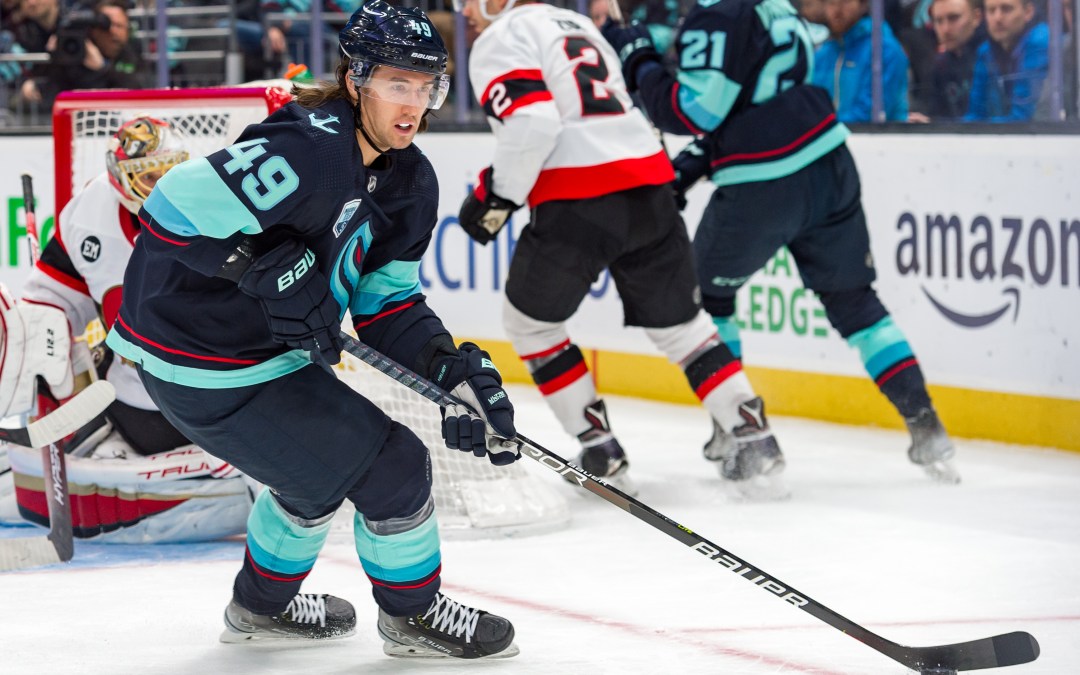 You would think that after all the hype over the last week and a half, Matty Beniers scoring for the second time in as many home games would have been the big story on Monday. The 19-year-old rookie did pot another goal in a 4-2 Kraken win over the Senators with a high tip of an Adam Larsson shot-pass. The goal earned Beniers the No. 3 star of the night and his third point in just three NHL games.

But Beniers was overshadowed Monday by two other players that have only been on the team a short while, guys that are playing for contracts when this season ends. There will be plenty of Beniers talk to come, but this particular night belonged to Daniel Sprong and Victor Rask.

Here are our Three Takeaways from a second consecutive home win for the Kraken.

This is a challenging juncture for guys like Sprong and Rask, who have both played on multiple teams this season, and who are both on expiring deals. The future is certainly murky for the duo, and they each needed a night like Monday to help their cases heading into the offseason.

At the Trade Deadline, Sprong was acquired as part of the Marcus Johansson trade to the Washington Capitals. After the deal, general manager Ron Francis made it sound like the Capitals wanted Seattle to take Sprong, indicating they weren’t particularly high on him. Rask, meanwhile, was acquired for nothing from the Minnesota Wild, who had passed him through waivers and sent him to the AHL.

Sprong burst onto the Seattle scene with three goals in his first three games as a Kraken, but had since gone quiet. He broke a seven-game pointless streak with his power-play goal to open the scoring against Ottawa, off a beautiful pass through the seam from… you guessed it… Rask.

Coincidentally, we had just asked coach Dave Hakstol about Rask and Sprong after practice on Sunday. He said good things about Rask, praising his smarts and his good stick. About Sprong, he implied that he hadn’t been thrilled with the Dutch forward’s two-way game, but he also said that the two had a recent conversation about it and that Sprong had shown improvement against the Devils on Saturday.

On Monday, even Sprong admitted that he had been struggling since his initial three-game outburst after joining Seattle. “After that—Dallas, Chicago, St. Louis—those three games, I got away from it a bit,” Sprong said of his two-way game. “I think I just started cheating a little, and then against Calgary I think I did the right things a little better, and then we had a good talk. It’s good when the coach communicates with you his standard of your game, and I think I responded really well, and I just want to finish off the season strong now.”

Sprong certainly can shoot the puck, and he looks like he was bred to shoot from the left circle on the power play. That’s probably not a coincidence, considering where he played previously. “I’ve watched the greatest goal scorer of all time for two years in that spot,” Sprong said, referring to former teammate Alex Ovechkin. “I learned a lot from him over that time, which I’m very grateful for. He was really good to me, talking to me about things like that, so I just know I’ve got to find that area, and then I know I’ve got a good shot, a good one-timer. I don’t need much space. Rask made a great play, and I had an open net.”

“That’s his spot,” Hakstol said. “He’s a shooter, and he can score from there. With Spronger the big thing—I talked to you guys about it [Sunday]—is the two-way game and his attention to detail there. He worked 200 feet again tonight, so a goal is… that’s what he does. We know he can shoot from that spot, and he did a good job. That was a big goal.”

Rask built off the outstanding pass in the first period and scored the eventual game winner in the second period. On a three-on-two rush, Alex Wennberg dished to Joonas Donskoi and then drove to the net, creating a nice passing lane for Donskoi. Donskoi found Rask on the other side of the ice, and before Anton Forsberg could get across, Rask had already fired it home.

“Rasky’s goal, that’s a good goal,” said Hakstol. “There’s a lot of pieces to that that make it a good goal. We skate and get some puck pressure, and then we’re able to transition quick on it. It’s a good play by all those guys and for sure by Victor to finish that off. That’s not an easy catch and shoot, across his body, but he got it, and he got it away quick. He’s a smart player, he has a good stick and good poise in all situations.”

Takeaway #2: The second period wasn’t fun… but then it was!

The Kraken—likely buoyed by Ottawa’s penalty woes—dominated the first period from start to finish, but only exited the frame with a 1-0 lead. They then entered the second and quickly frittered away that lead, coughing up two quick goals to give the Senators the lead.

On the first Ottawa goal, Will Borgen partially whiffed on a pass through the neutral zone, and Connor Brown easily picked it off, eventually leading to a Brady Tkachuk goal. On the second goal, Sprong got smoked and tangled up along the boards with Riley Sheahan, and the puck eventually got worked around to Nick Holden, who shot through traffic and beat Chris Driedger.

To Seattle’s credit, the Kraken quickly turned it around. “They just came flying out,” Rask said. “They didn’t have the greatest first period, but we battled through it and came back.”

“We did a good job pushing back on it,” added Hakstol. “The Beniers goal is an important goal to make us feel good and get us going in the right direction.”

After Rask scored at 16:15 to put the Kraken ahead for good, Alex Formenton took a big run at Carson Soucy behind Seattle’s net. Haydn Fleury, who hasn’t had a fight all season, jumped to his defense. Fists and gloves were flying immediately.

“That’s what you gotta do,” Hakstol said. “We’ve talked about that throughout the year. It’s probably not something he’s done a whole lot in his career, but there’s a time and a place, and that was the right time for him to step in and do what he had to do there… I love the fact that he was willing and able to do it at the right time.”

Like we said, it ended up being a pretty fun second period.

Takeaway #3: We learned something about video challenges

We thought Karson Kuhlman had scored a sick goal in the third period to put the Kraken ahead 4-2. Yanni Gourde batted down a puck, fought off a defender, and got it to Kuhlman, who made a dazzling move around Artem Zub and beat Forsberg over his blocker.

However, Ottawa challenged for… [checks notes]… “a missed game stoppage,” and to our surprise, the challenge succeeded.

Replay showed that Gourde had absolutely touched the puck with a high stick, but what confused us about the challenge was that the infraction took place several seconds before the goal. We always thought that challenges for things like a high stick could only come if the goal was, say, scored with a high stick.

We were apparently wrong, and now we’re left questioning everything. But hey, we learned something on Monday, and it’s neat to learn new things, though we would prefer to learn these lessons in less harsh ways.

“I actually said when [Gourde and Kuhlman] came back to the bench, ‘Awesome second effort,’” Hakstol recalled with a chuckle. “It’s like in life, right? You talk about second effort, usually things turn out your way eventually, and I thought it was a great second effort by both Gordo and Kuhly on that. Great play by Kuhly and finish, and unfortunately it came off the board, but it doesn’t take away the effort.”

The Kraken are now 1-0-0 with Macklemore and Marshawn Lynch officially members of the team’s ownership group.