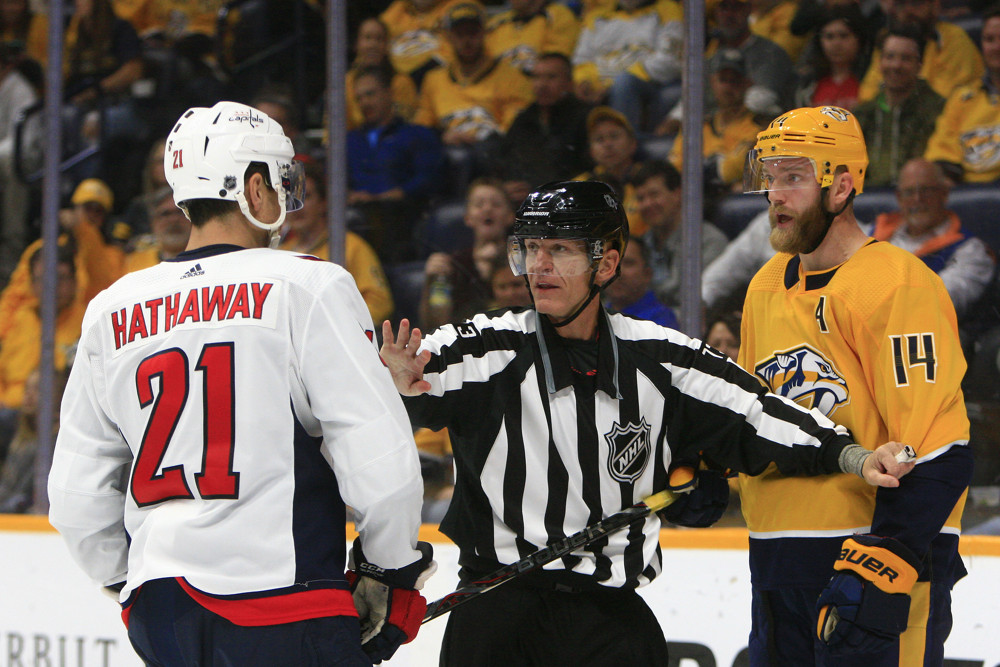 For Vaughan Rody, Hockey is “religion” in his hometown of Winnipeg, Manitoba. Even when life led Rody to other places, he felt like hockey should be a part of his life.

His route to practicing his religion was through refereeing. It’s a journey that involved a giant leap of faith, a few lucky breaks, and some cherished memories for the longtime Lake Stevens, Washington resident.

Rody will officiate his final game in the National Hockey League on Wednesday when the Seattle Kraken take on the Colorado Avalanche at Climate Pledge Arena, concluding a 22-year career as a linesman.

“I started refereeing like most kids do for extra money, and really just to stay in the game.” Rody said. “Then I realized I was a good enough skater and had a knowledge of the rules and some ability. You quickly work through the ranks and get some people that really believe in you.”

Rody began officiating when he was 14, picking up youth hockey games while working a “fantastic job” as a site supervisor for the Forks Renewal Corporation as a City of Winnipeg employee. Life was good and stable, but it didn’t involve hockey.

Rody left that job when he was 24 to become a referee in the Western Hockey League, based in Seattle.

That didn’t quite sit well with his father.

“I know for a fact that my dad worked at the railroad for probably 30 years, and I was making more money than he was at the time,” Rody said. “His young kid gets this fantastic job and all of a sudden I’m deciding that I’m going to take a leave of absence to go try to find a job there’s only 35 in the world of, it didn’t really sit that well with him.”

To make ends meet with a meager WHL referee salary, Rody worked at Boeing in Everett as an inspector on the 777 program in the mornings and officiated WHL games at night. A common night involved Rody returning home from a game in Spokane at 1 a.m. only to wake up at 4 a.m. to clock into his shift at Boeing.

Rody made his NHL debut, and walked away from his job at Boeing, when he was hired as a full-time NHL linesman. He skipped a common step of officiating in the American Hockey League after graduating from junior hockey.

Now that his NHL officiating chapter has closed, Rody has an Amazon delivery franchise to tend to — one he became the owner of about a year ago — and still runs his Pro Edge Power Skating program that was founded in 2007.

Retirement won’t be too sleepy for the effervescent “kid” from Manitoba who walked away from certainty to make his dream a reality.

But Rody will still take some time to reflect on his gamble that paid off and the journey it sent him on in front of friends and family.

“I think with this game when you’re in this business for such a long time, you realize that this is all about your family,” Rody said. “And it’s all about the people that have had a hand in making me or allowing me to have this dream. … Those people [that support you], when they get a chance to share in your accomplishments and they get a chance to kind of share in your success and see what you do for work, those are the most meaningful moments.”

What’s it like seeing players and coaches show you so much respect in your final season?

VR: I think what happens is people see that in hockey we have a pretty amazing tradition at the handshakes, and when you’ve been in this league as long as I have, I don’t really know the what the whole thing is, but the bottom line remains that there’s a lot of respect from the players to you as an official. They do a tremendous job of kind of showing their respect through the handshakes and the little shows and gestures like that.

For them to take the time, to take a moment to reflect on your career and wish you all the best [feels great]. At he end of the day, you don’t make it 20 20 some years by accident. I think when they come over and shake your hand, they take time out of their schedule and in their day to do that, I think it’s just such a show of respect and I think it just legitimizes what they think of you in your career.

Is your route a traditional path to becoming an NHL official? How has that changed over the years?

VR: That’s really changed. You know, when I first started, the skillset was that you became a referee, and that’s changed over the last few years. Because now a lot of our young guys, they’re drafted, they’re playing in the American Hockey League, they’re not quite good enough to make it to the NHL, so their careers kind of fizzle out. But they’re great skaters, they’re great athletes, and then the NHL takes shine to them with the NHL training program.

That’s the big change over the last six-to-eight years. Previously you would play and then you would start refereeing at 15-16 years old. And then you would learn and hone the skill to become an official through time and that’s kind of how it was back then.

What’s the biggest difference between officiating a junior game and an NHL game?

When you say communication, that’s just a matter of being able to communicate like adults?

I think you have to learn to become a pro. You have to learn the basic skills. What separates somebody from being good to being great? And no matter what those tangibles are, you’ve got to figure them out for yourself. It has to be something that you find within yourself.

The most important thing I think, in officiating between junior hockey and the pros is making sure you understand the difference between abuse and emotion.  You’ve got to be able to sift through that and you’ve got to be able to work through that. You have to be to able to bark back at them and calm them down a little bit and then they have to trust that you’re going to do the right thing for the game. Because as officials, that’s our job. We serve the game.

What were the WHL games like back then to ref?

VR: They were a lot rougher. I can tell you. Even back in the day, they were probably a little bit more difficult to do than the pro style of hockey. I think that’s what gave us all of our experience. You would have line brawls, you would have fights, and you weren’t sure if guys were going to go in the stands and fight. You didn’t know. It was like a free-for-all back in the day. It was a different game. There was a lot more violence in the game back then.

And the game has changed. So the Western Hockey League, the way it was played, prepared you for anything. It prepared you for the NHL. People can’t really behave like that, you know, they’re called on the carpet. There’s an image that the NHL wants to portray. And the Western Hockey League, not that they didn’t have an image, but anybody could fight anybody at that opportunity or that moment. It wasn’t just heavyweight vs. heavyweight, there were 20-year-olds fighting 16-year-olds and that’s a huge age difference, size difference, and mentality difference between those two. You have to be aware because the game expected you to make everybody safe.

VR: My most meaningful game is probably the All-Star Game in Nashville [in 2016]. I had a chance to bring probably 14-16 family members and friends to the game. The NHL is first class. They took care of everything. You get an opportunity to kind of showcase what we do for a business night in and night out to your friends. They really look upon the NHL as a really exciting place to be and then they come to work with you and they witness how cool your job is. They witness how first-class the organization is and how you’re treated and you get a chance to see their excitement through their eyes.

Those are my most meaningful games, that one and probably my 1000th game, but again, you don’t get to 1000 and you don’t get to game No. 1 without a group of people helping. You get a chance to share those moments with your family and friends. It makes it really, really memorable.

What’s it like raising a family as an NHL official?

What’s next for you, Vaughan?

VR: When you’re from Canada and you’re in athletics, having the opportunity to work in the National Hockey League is and has been a tremendous honor. And I’m excited about it. I’m excited about my career. I’m proud of it. But now I’m owning a business, having $180,000 payroll every two weeks and having 80-some employees and running a business that’s doing $6 million a year annually. This isn’t my expertise.

That’s what’s next. I’m proud of the NHL, but I’m really proud of what we’ve accomplished at Amazon and this new chapter of my life. I’m really proud to be a little kid from Winnipeg, Manitoba making it to the NHL, but I think I might be more proud of running this business because me being a pretty good athlete was kind of expected. This is a real new venture and it’s something I’m extremely excited about.