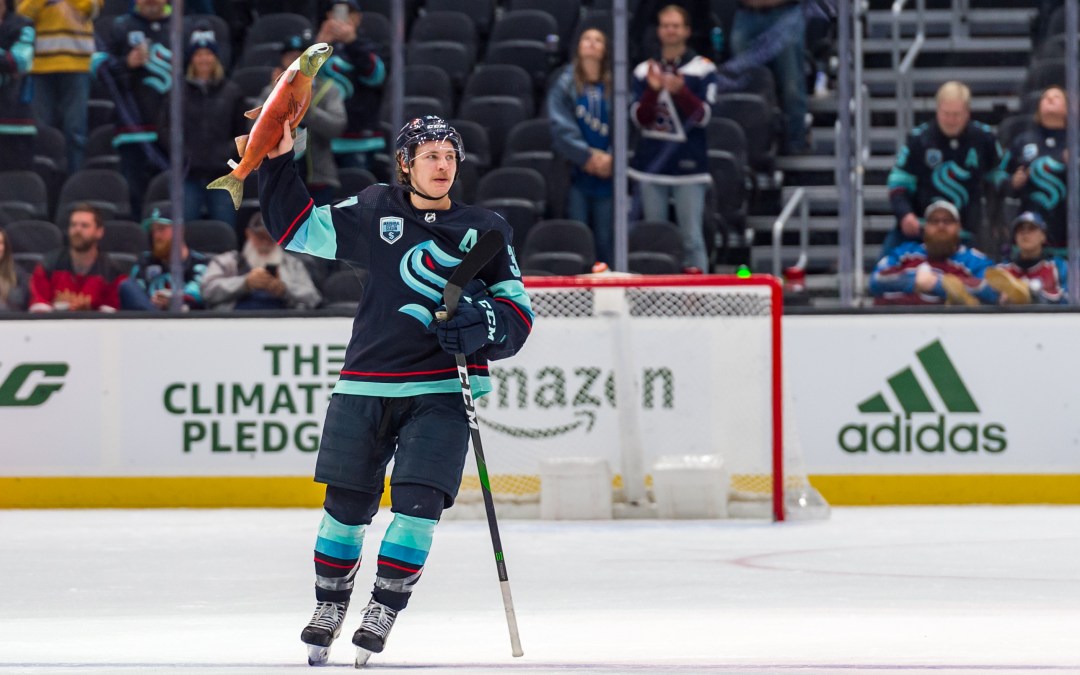 After Seattle’s morning skate on Friday, Yanni Gourde addressed the media. He indicated that against the San Jose Sharks, the Kraken had a desire to put it all out there for the fans that have been supporting them so feverishly all season long.

The Kraken delivered, and so too did the especially boisterous fans, just as they have for every home game in this inaugural season. On the first ever Fan Appreciation Night at Climate Pledge Arena, Seattle’s players made the best gesture they could to show their thanks, sending the crowd home happy with a 3-0 win.

Here are our Three Takeaways from the last Kraken home game of the 2021-22 season.

In three of the four games prior to Friday’s victory, the Kraken had 2-0 leads but ultimately came out on the losing end in all three. So after Adam Larsson scored at 18:31 of the first period to extend the Kraken lead to 2-0, we had flashbacks to those recent collapses.

Things got a little hairy in the second period when Jamie Oleksiak and Larsson took back-to-back penalties and gave San Jose 1:12 of five-on-three time. But Seattle’s penalty killers were equal to the task and actually gave the team a big momentum boost.

“That’s what a good kill can do for you,” coach Dave Hakstol said. “[Will Borgen], [Carson Soucy], and [Riley Sheahan] were out there for really the whole five-on-three… They did a great job, they kept everything to the outside.”

“The guys were patient, a couple shot blocks, and just let me see the puck, too, so things were just kind of clicking,” said goalie Chris Driedger. “They kind of had us in zone the whole time, but we kind of kept everything to the outside and didn’t let anything through us. So when the guys put up effort like that, it’s pretty easy for me to do my job.”

After Larsson’s penalty ended, the Kraken went the other way, and Jared McCann rang a heavy shot off the post. It was LOUD in the building at that point, and had Seattle scored in that moment, the structural integrity of the new arena would have been tested. Even so, play swung back in Seattle’s direction after that, and the Kraken never looked back.

Takeaway #2: Driedger gets his first shutout

Driedger ending his home campaign with his first shutout of the season and the first ever shutout by any Kraken goalie at Climate Pledge Arena was a nice cherry on top of an already tasty sundae.

Though he has never said it, this has surely been a tough season for Driedger, who signed with Seattle at the Expansion Draft expecting to be the team’s starter. Then the Kraken signed Philipp Grubauer and made Driedger the backup. He got hurt multiple times in the early going, and when he was healthy, he didn’t get to play enough to get into a rhythm.

The second half of the season has been much better for Driedger, and it was fitting that he would earn his first shutout on this particular night.

“Coming out for this building, going crazy like it was, was pretty special,” Driedger said. “To send it off at home to finish off the year is pretty cool too. So, I’ll remember this one for a long time.”

“I was so happy for him,” added Gourde. “Last game in this building this year and for him to get the shutout— he worked so hard all year. Super happy for him, and he made some tremendous saves tonight again. He was big in net and killing that five-on-three and all that stuff, he did an amazing job.”

Following Friday’s game, the Kraken held a brief ceremony, in which all of the players returned to the ice to throw plush fish and t-shirts into the crowd, and then awards were handed out to McCann, Gourde, and Grubauer.

McCann won the Pete Muldoon MVP Award, Gourde won both the Fan Favorite Award and the Guyle Fielder Award for “perseverance, hustle, and dedication,” and Grubauer won the Three Stars of the Year Award.

“I’m super appreciative,” said Gourde about being chosen as the Fan Favorite. “I mean, I’m not trying to do that. I guess the way I play probably— I probably smile at the opponent more times than not. All those things probably add up to me. But I really appreciate that. It means a lot. I’ll keep doing that for next year as well. This is how I play, and hopefully we can keep going and keep building this relationship that we have.”

It was a nice way to cap off a night in which the atmosphere in Climate Pledge Arena—which was so good all year—was especially electric.

“You look at the atmosphere out there, before the game, throughout the game, and then even after; I don’t know that anybody left before the before the team came back out for the presentations and the jerseys and the awards, so that’s pretty special,” said Hakstol. “It’s awesome to be able to finish with a good win in front of a great crowd like that. And they’ve been there through thick and thin all the way through the year.”

We’ve heard players talk often this season about how great the fans have been. We believe they have been genuine when they’ve said things about this being the best and loudest fanbase they’ve encountered in their respective careers.

Friday was a perfect night for the Kraken faithful to show one last time just how loud they can get, and the team rewarded them with a stylish sendoff.

Bonus takeaway: What a ride

On behalf of our whole team here at Sound Of Hockey, I just want to give my very sincere thanks to all who have read, listened, and followed along all throughout this first season of Kraken hockey.

Five years ago, it didn’t even feel like a possibility that in 2021-22 I would have the opportunity to cover an expansion NHL team, attend press conferences, talk to players and coaches, go to (almost) every home game, and have an incredibly supportive fanbase consuming the work I was doing. We think we’re on track for building something special in this exploding hockey community, and without your support along the way, we would not be where we are today. Thank you.

Oh, and I’m also happy to say that we’re just getting started. Lots more to come!