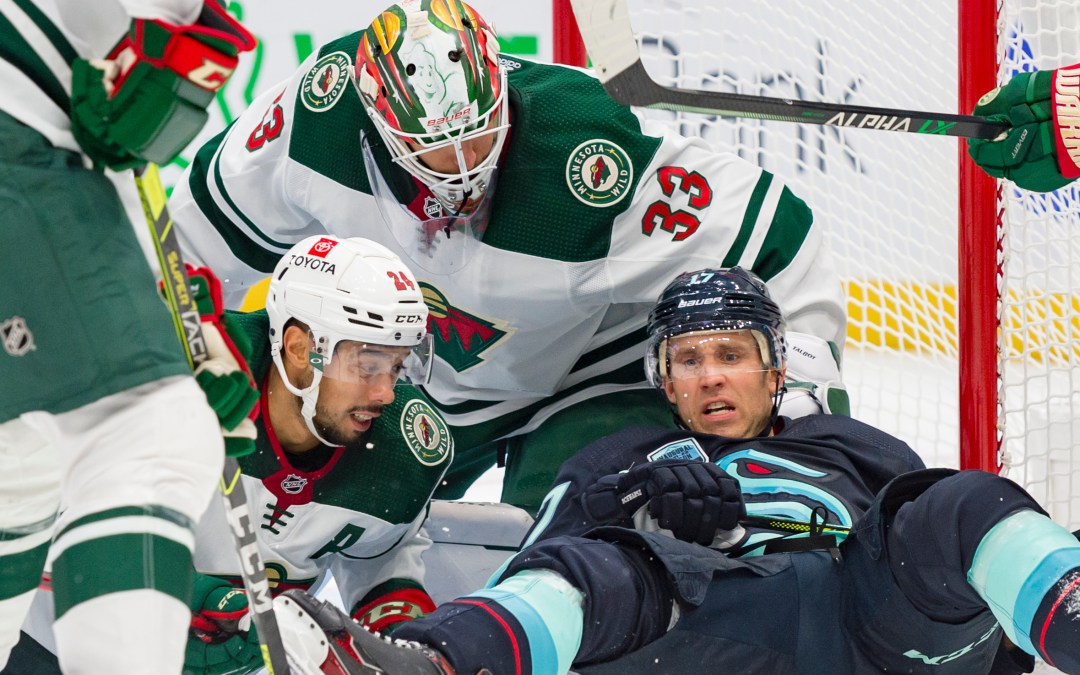 The feeling is back. It’s a really hard feeling to explain, but it’s like a combination of unbridled joy mixed with existential dread for what you know will likely happen. It’s trying to avoid getting your hopes up, but then something good happens, and suddenly you become primed to have your still-beating heart ripped right out of your chest like that poor fellow in Indiana Jones and the Temple of Doom. It’s a miserable but also incredible feeling.

That, my friends, is the Stanley Cup Playoffs. That’s having a dog in the fight. That’s what Kraken fans have to look forward to in years to come.

On soundofhockey.com, I generally try to limit my “Minnutiae,” as we call it on the SOH Podcast, but I thought new hockey fans, spawned by the arrival of the Seattle Kraken, could get a taste of what it’s like to have a team you love fighting through the toughest tournament in sports. I also thought hardened hockey fans, who have grown up rooting for other teams around the NHL but have now seen their allegiances shift to the Kraken, could relate.

If you know me or you’ve listened to the podcast for a while, you know that my pre-Kraken hockey fandom fell squarely on the shoulders of the Wild. I remember jumping, hugging, and crying actual tears of joy in a cold Minnesota basement with a group of high school buddies in 2003. That was when the Wild, just three years into their existence as a franchise, beat Vancouver in Game 7 to qualify for the Western Conference Final.

In that moment, the kid who was hosting our game-watching gathering ripped his shirt off, swung it around his head, and yelled, “We’re going streaking!” Hearing the post-win commotion, that kid’s dad had quietly appeared in the basement without us knowing, and surprised us all by calmly saying, “No you’re not. Put your shirt back on.” We all had a good laugh at that kid’s expense, but he didn’t care. The Wild had pulled off the unthinkable.

Those are the joys and the idiocy the playoffs can bring.

I also remember crying actual tears of sorrow a week later, when Jean-Sebastian Giguere, his enormous pads, and the Anaheim Ducks eliminated the Wild in a four-game sweep.

Those are the lows and the grief the playoffs can bring.

Since that improbable run, the Wild have caused incessant heartache for their fans (and for me), failing to advance beyond the second round for 18 years. Such mediocrity will make even the most optimistic fan actively try to maintain pessimism, even as this year’s team – with its high expectations – enters the Stanley Cup Playoffs for the ninth time in 10 years.

An odd season for existing hockey fans in Seattle

This really has been an odd season for me as a fan, and I’m sure many of you have experienced this. I was such a diehard of the team from my home state, I had a hard time wrapping my head around the idea that I could root for another NHL team. But the Kraken are a loveable group, and being so close to them throughout the expansion process and feeling the energy night in and night out at Climate Pledge Arena has made me equally diehard for Seattle. When the Kraken reach the playoffs for the first time, I know that I’ll feel what I’m feeling currently, and perhaps on an even greater scale.

For now, I have the luxury (or the curse?) of finding myself fully back on the Minnesota bandwagon, watching every second of their series against the St. Louis Blues as if the next play could end my life. What will happen if any of the games go to overtime? What if this series goes to a Game 7? I almost can’t bear the thought of those things happening, and just writing this, I feel my palms sweating.

And this is only the first round, for f***’s sake.

The Stanley Cup Playoffs are a roller coaster of emotions

In Monday’s Game 1, the Wild got spanked 4-0 on home ice. Blues netminder Ville Husso looked cool as a cucumber in his first ever playoff game, becoming the first goalie all season to shutout Minnesota in its home arena. All I could picture for the next two days was Jake Allen backstopping these same Blues to an easy first-round series win over Minnesota in 2016-17. Here we go again, I kept thinking on Tuesday. This stupid team can’t score a goal to save its own life in the playoffs. Here comes another quick first-round exit. I hate this team.

My mood was noticeably rotten between Games 1 and 2. On Wednesday during the day, I was so lethargic and disinterested in doing anything, I didn’t even want to drag myself to the kitchen to serve myself lunch. Eventually I did eat lunch around 3pm but pulling that pre-mixed salad out of the fridge and putting it onto that plate felt like a herculean task.

That night, I was scheduled to watch the second game of the series at fellow SOH contributor John Barr’s house. With every mile I drove closer to John’s abode, I felt this growing sense of impending doom. Like I was heading into a surgery that the doctor had deemed “risky,” and I wasn’t sure if I would wake up on the other side.

The game started, and Minnesota jumped out to a 3-0 lead in the first period. It was close to a no-doubter of a game, save for a few moments in the third period when the Blues had pulled within two goals. In the end, the Wild skated away with an easy 6-2 win and a series tied at 1-1.

Since Wednesday’s game, I’ve been as chipper as a rabbit in springtime. The improvement in my mood can be attributed only to Minnesota’s resounding Game 2 victory. In this moment, I’m completely unaware that these teams will play each other again on Friday night, which could easily send me right back into a spiral of despair. I simply will no longer allow myself to even consider that the end of Minnesota’s season could come as early as Tuesday. After one victory, I’ve gone from feeling ready for the death of my team to scoping out my spot on the Wild’s Stanley Cup victory parade route.

Is this normal? No, but it’s the playoffs. This is what you have to look forward to, Kraken fans.