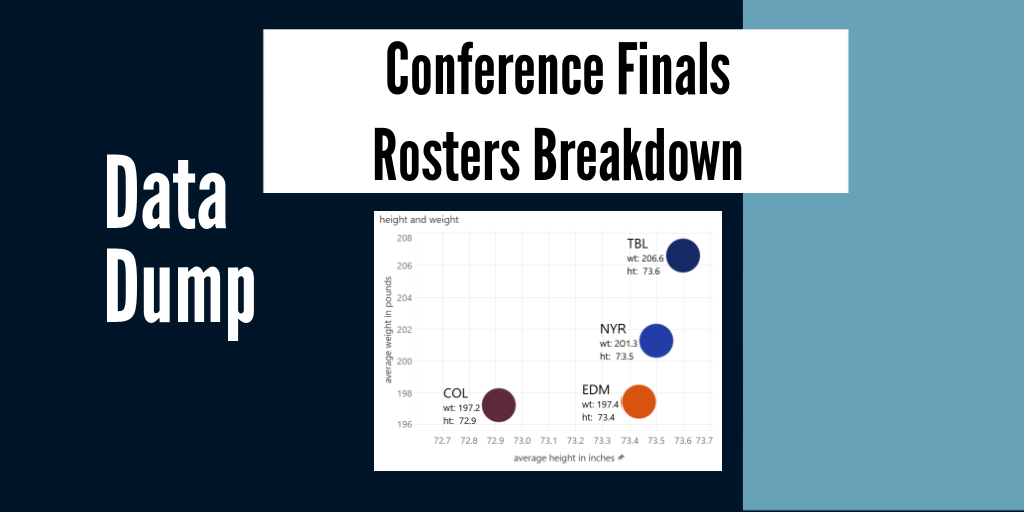 The final four teams are set to begin the third round of the Stanley Cup Playoffs this week, so we thought it would be fun to look at the remaining rosters for the Conference Finals to evaluate how they were built.

NHL Entry Draft, free agency, trades, and waiver wire acquisitions are all the various ways a team can build a roster. To build a contender, you need to use every tool at your disposal. Let’s look at how these teams built their rosters.

The two-time Stanley Cup Champion Tampa Bay Lightning have the highest percentage of players that were acquired via the NHL Entry Draft. It’s fascinating that Colorado’s percentage of drafted players is so small, especially considering that their cornerstone players – Nathan MacKinnon, Cale Makar, Mikko Rantanen, and Gabriel Landeskog – were all acquired through the draft. The variance among the teams that have a high draft percentage is a little surprising as well, being that the conventional wisdom is that successful teams are built through the draft.

To add some context around the roster composition, we should look at which players are scoring each team’s goals by acquisition type.

The second chart shows that players who are still playing for the teams that drafted them contribute a higher percentage of goals scored in the playoffs compared to the quantity of drafted players still on the roster (shown in the first chart).

This is easily explained as the higher-skilled players tend to score more, and teams are more willing to hold on to their drafted, high-scoring, skilled players (i.e., pay more money to assure they don’t reach free agency).

Note that goal scoring is a rather simple and narrow way of evaluating contributions to a team’s success, but directionally, we think this is a fair indictor on how to evaluate contributions by acquisition type.

Regardless of the acquisition type, it is also fun to look at how many players each team has from each draft round.

As one would expect, players that were selected in the first round account for the highest percentage of players on the rosters. The surprising piece here was that 25 percent of the Rangers roster consists of undrafted players (Alexandar Georgiev, Barclay Goodrow, Dryden Hunt, Artemi Panarin, Kevin Rooney, and Frank Vatrano).

The average age of a team is also an appealing data point to evaluate.

Tampa is the oldest team in the Conference Finals, which makes sense as they have continued to trade away young prospects and draft picks at the trade deadline over the last three seasons. These moves have left their prospect cupboard rather light.

Edmonton is the second oldest team remaining, though this is being inflated by Mike Smith (40) and Duncan Keith (39).

Looking at average age of the rosters is interesting but can be a little misleading because it lacks things like ice time. Plus, having a few players on the extremes of the age range can influence a team’s average age.

Finally, we are going to take a quick peek at the height and weight of the four teams in the conference finals.

The heights are very similar with all teams having an average height within less than an inch of each other, but the weight of the players is quite different between the Western Conference teams (COL and EDM) and the Tampa Bay Lightning.

Here is a look at the player detail behind the weight of the players:

In Tampa, Victor Hedman and Patrick Maroon are right around 240 pounds and are undoubtedly influencing the average weight of the team. On the other side of the spectrum, Kailer Yamamoto is listed at 153 pounds and is the lightest player across the four remaining teams.

This was a very simple view at evaluating the Conference Finals rosters, but we hope it gives you a different perspective when watching over the next two weeks. If you found this interesting, you might enjoy looking at this story, breaking down all NHL rosters from last year. If you have questions about the data or some additional angles you would like me to consider, let me know in the comments section.