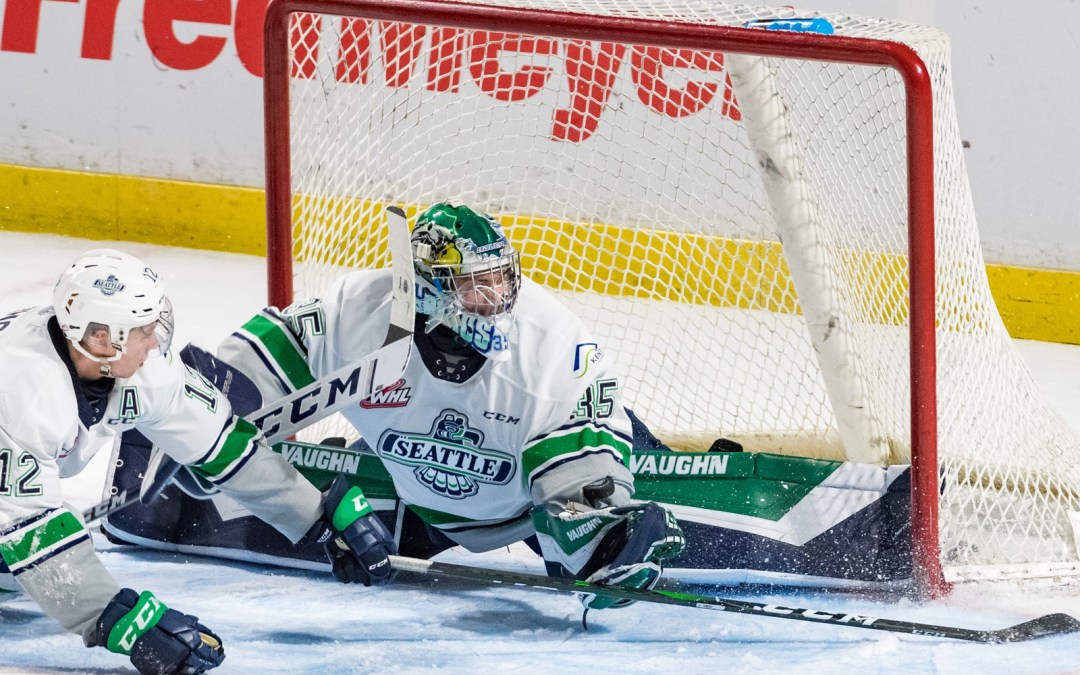 When the Seattle Thunderbirds drafted goalie Thomas Milic in the second round of the 2018 Western Hockey League Draft they were hoping they had acquired a big-game goalie, the type of player that didn’t wilt or hide from important games. As they prepare to play the Edmonton Oil Kings in the WHL’s Championship Series, they now know that Milic is that big-game goalie they had hoped for.

The 19-year-old showed up and won big games for Seattle during its current playoff run. Down three games to one in the second round against Portland, Milic won three straight, including two wins where he allowed one goal in each game. In the Western Conference Championship Series against Kamloops, he won the last two games in the series, including a 3-2 win in Game 7.

He’s been so good that the WHL named him Goalie of the Month of May.

He’s the first goalie in WHL history to win two Game 7’s on the road and is 5-0 in big elimination games.

“I love playing in those big games,” Milic said Wednesday. “Part of why I love being in the goal is just being able to have so much influence on big games like that. I think I’m a guy who can be relied on no matter what. Whether it’s a busy game with a lot of shots or a low-shot game where we’re dominant, so whatever it is, I’m the guy.”

Milic hasn’t just been the guy in the big games, he’s played well in general.

His first full season in the WHL yielded 27 wins and a .912 save percentage. He’s stepped it up in the playoffs where his save percentage has jumped up to .926, and he’s allowing just over two goals per game.

“Tommy has been awesome, he’s been a rock back there for us,” Thunderbirds team captain Tyrel Bauer said. “He stepped up and made a lot of big plays when we needed it. We’ve had the belief in Tommy all along and there was no question that he was the guy for this job. He’s earned it and the team’s believed in him. There’s no player I’d rather have back there for us right now.”

Milic and the NHL

Milic was not drafted during the 2021 NHL Draft which was his first year of eligibility. He can still be selected in July’s draft but he’s not worried about that just yet, saying all that is for after the season. He was invited to the Seattle Kraken’s first training camp last year as a free agent but could not attend due to an injury.

Milic says the opposition has been a motivator.

“It’s hard to ignore sometimes, signed NHL guys and guys that have lots of respect around the league and have lots of accolades under their belt,” he said. “But I think all that really does for me is pushes me to play even harder and hopefully come out on top.”

Playing against Edmonton, he’ll face yet another NHL drafted goalie with accolades in the Oil Kings’ Sebastian Cossa, who was a 2021 first-round pick of the Detroit Red Wings. Milic describes his play as fearless and he’ll need to have that mentality again.

Milic is a ‘smaller’ goalie, listed at 6-feet-0, which is the only possible reason that he was passed on during the NHL Draft. His play this year and particularly in the playoffs may help assuage any reservations NHL teams have of selecting him this July.

Seattle will need more big games out of Milic over the next week if they hope to win the WHL Championship.

The Oil Kings come into the Championship Series with a 12-1 playoff record and are loaded with offensive talent such as Dylan Guenther (Arizona Coyotes) and Jake Neighbours (St. Louis Blues). Milic says he’s had a little bit of pre-scout on Edmonton’s players but doesn’t think the Thunderbirds need to change much.

“Our physical style of play has been really effective against a lot of other high-end talent that we faced,” he says. “I think we’ll just continue with that and just play our game.”

Milic has been good for Seattle on the road this playoffs, and that’s where they’ll open the series on Friday night. The series shifts back home for Tuesday and Wednesday. The accesso ShoWare Center crowd has embraced Milic and often has chanted his name after big saves. While he’s focused on the game, he hears the chants.

“Absolutely I hear it,” he said. “I can’t help but smile and acknowledge all the fans. For me, they’re special.”

Tickets are on sale for Games 3 and 4 here.