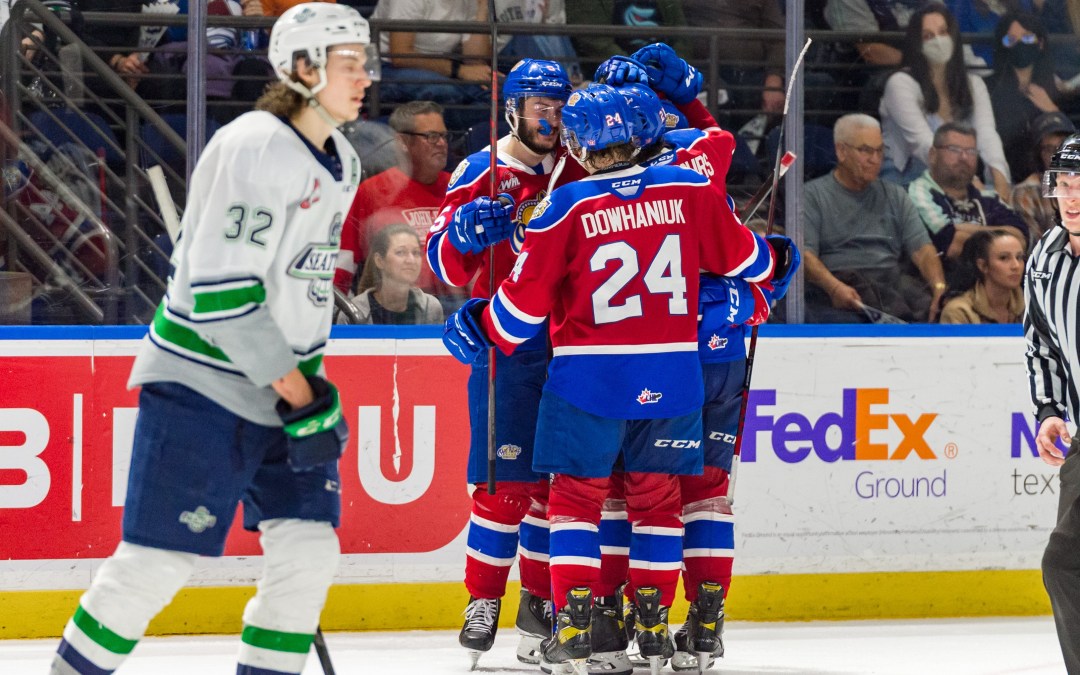 KENT – In front of a sold-out accesso ShoWare Center, Edmonton Oil Kings goalie Sebastian Cossa tamed the crowd and made 21 saves in a 4-0 win against the Seattle Thunderbirds to take a 2-1 series lead in the WHL Championship Series.

Former Thunderbird defenseman Simon Kubicek had a goal and an assist in his first game back in Kent since being traded in June of 2021. It was the fourth post-season shutout for Cossa, and the Oil Kings also had goals from Kaiden Guhle and Jakub Demek.

“We played well for 60 minutes,” Oil Kings coach Brad Lauer said. “I thought we did the things we needed to do, made the changes that we needed to make at the start of the game, and I thought our guys really did a good job of executing.”

Thomas Milic made 33 saves, and the Thunderbirds lost a second game in a row and find themselves behind for the first time in the series. Seattle will host Game 4 at the ShoWare Center Wednesday in a near must-win game

“I thought that the first half of the game was good for us and we were doing some good things,” Thunderbirds coach Matt O’Dette said. “It’s pretty tight checking, not a lot of chances either way. I thought the turning point was the goal right after our power play. That was a momentum swing for them, and we sagged a little bit after that and couldn’t mount enough push in the third period.”

The goal in question came at 17:02 in the second period with the game scoreless. Seattle had just missed on a power-play chance when Demek received a pass from Kubicek and streaked behind the Seattle defense to beat Milic with a backhand and made it 1-0.

In a tight-checking game with room and space hard to come by, Edmonton rode the momentum of Demek’s goal along with a stifling forecheck that has given the Thunderbirds fits all series long.

“They’re a good forechecking team,” O’Dette said. “Their D are up in the forecheck. I thought execution wise, we could execute it better and just making clean plays and ticker tape passes. That started to fall off as the game went on.”

Cossa was there for whenever the Thunderbirds were able to work the puck down ice and on the penalty kill. The Thunderbirds ended up 0-for-3 on the power play. It was the fourth shutout of the playoffs and 11th this season for the Detroit Red Wings 2021 first-round NHL Draft Pick.

“Good job by our boys,” Cossa said. “Our defense did a good job of getting pucks quick to our forwards and boxing outside to do the job.”

After the third straight first period where neither club scored, the visitors outshot Seattle 14-8 in the second period and began to tilt the ice.

Demek opened the scoring minutes after Milic made an outstanding save on a two-on-none breakaway attempt. Kubicek scored on a one-timer on the power play at 4:10 of the third period after receiving a cross-ice pass in the left circle.

“We have to flush this game, the turnaround is less than 24 hours,” O’Dette said. “We have no time to feel sorry for ourselves. Regroup, obviously make some adjustments and watch the video. But we’ve been a resilient team all year, and it’s another opportunity to show that again.”