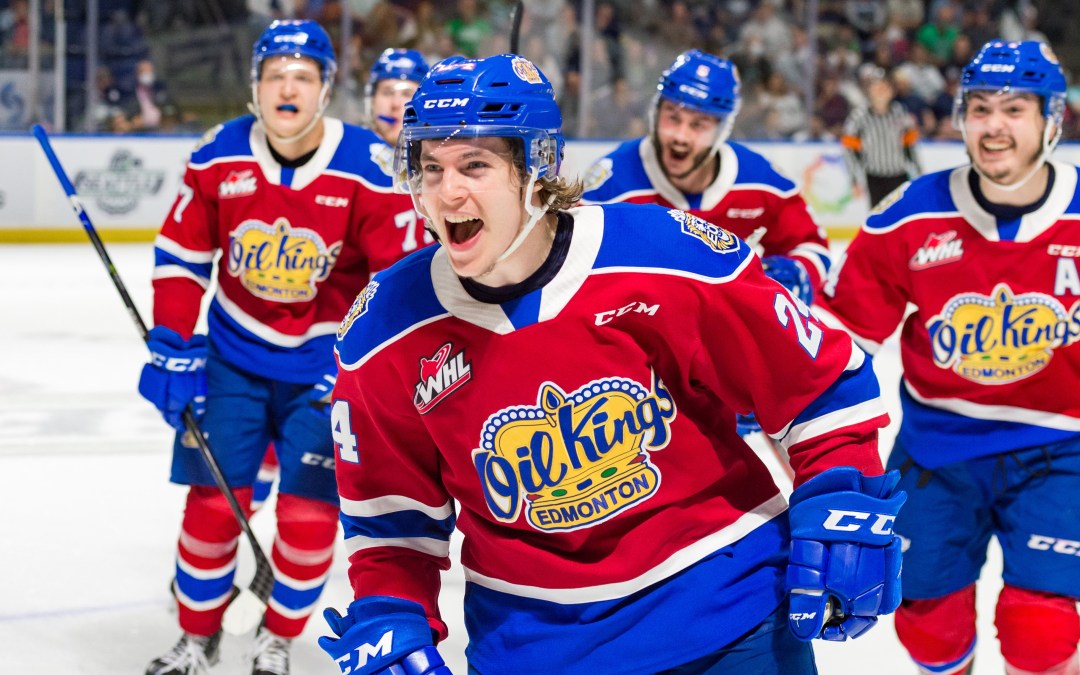 KENT – The Seattle Thunderbirds were three and a half seconds away from a chance of tying their best-of-seven WHL Championship Series against the Edmonton Oil Kings Wednesday night at the accesso ShoWare Center at two games apiece. The game was tied at 2-2 and one clear of the puck would have sent Game 4 into overtime, but Seattle couldn’t get it out of their zone.

Instead, Edmonton kept the puck in and Oil Kings defenseman Logan Dowhaniuk flung the puck towards the Seattle net. It somehow found its way through bodies to send Edmonton to a stunning 3-2 Game 4 win over Seattle, disappointing the 4,468 in attendance.

The Oil Kings now lead the series three games to one.

The Thunderbirds may have played their best game of the series, scoring twice on the power play and outshooting Edmonton by a 38-25 margin, but couldn’t get another puck past Oil Kings goalie Sebastian Cossa.

“That’s playoff hockey sometimes, you don’t always get what you deserve,” Thunderbirds coach Matt O’Dette said. “There’s obviously things that we could have done better in the game to come out on top. But we worked, we came to play. Disappointing ending, but we did a lot of good things tonight.”

Edmonton was paced by a pair of scores from Josh Williams, 32 saves from Cossa, and is one win away from its third WHL Championship and a trip to the Memorial Cup.

“I thought we played a good hockey game,” O’Dette said. “We needed to respond after last night to play a better game. We did clean up a lot of areas that we needed to clean up. It’s a heartbreaker, there’s no other way to say it. I mean, it’s a heartbreaking ending and we have no time to dwell on it. We have to be able to regroup and get ready for the next game.”

Game 5 will be played back in Edmonton on Saturday.

Wednesday’s game got off to a rocky start. Seattle defenseman Tyrel Bauer was given a five-minute major after a hit on Edmonton’s Brendan Kuny, who was carried off on a stretcher early in the contenst. Bauer’s penalty carried with it an automatic game misconduct.

In what was likely Bauer’s final game at the ShoWare Center – he is a signed prospect of the Winnipeg Jets and eligible to play in the American Hockey League next season – ended after five minutes of play.

“[The ref] said they had no choice because the player was injured,” O’Dette said of the call. “I thought it was incidental contact. Kind of two guys colliding that maybe didn’t see each other. I thought Bauer was heading back to the front of the net to defend. Obviously, you never want to see a player hurt like that. I hope he’s okay.”

After the game, Oil Kings coach Brad Lauer said that Kuny had been released from a local hospital and would recover.

Seattle survived the five minutes, but Reid Schaefer was called for boarding just before the major penalty ended, giving Edmonton two more minutes of a power play, but the Thunderbirds were able to kill that off as well.

Seattle’s penalty kill was quick on pucks and got clears while the Oil Kings could not get set up.

“Seven minutes straight on the kill is never ideal,” Seattle’s Jared Davidson said. “They found a way to get ‘er going and shut them down. It was awesome, awesome to see.”

The Thunderbirds then went on a power play of their own and cashed in when Calgary Flames prospect Ciona scored his eighth of the postseason to make it 1-0 at 16:08 of the first period.

Edmonton squared the game at 3:37 of the second period on a goal by Josh Williams who slid a rebound past Milic.

Williams would score again to make it 2-1 at 5:50 when he circled and fired a wrist shot.

Seattle tied the game at 12:58 on a perfect wrister from Davidson who scored his 13th goal of the postseason. The Thunderbirds ended the night 2-for-5 on the power play. The one power play on which they didn’t convert but needed to the most came with 2:40 left in the game when Justin Sourdif was  called for a trip. The Thunderbirds couldn’t find one more goal, setting up the late-game heroics for Edmonton.

Seattle has been down 3-1 in the postseason once before, against Portland in the second round. They were able to find a way and fight back, winning twice on the road. They’re going to need to find that motivation one final time.

“We’ve been here before, so we just got to take it one step at a time, one game.” Lucas Ciona said.

> Seattle played without overager Henrik Rybinski who was hurt during Game 1 of the series.

> Likewise, the Oil Kings were without star Dylan Guenther who apparently was injured during Tuesday’s Game 3.

> It was the last game at the accesso ShoWare Center for Rybinski, Lucas Svejkovsky, and Ryan Gottfried, who are too old to return to the WHL next season.