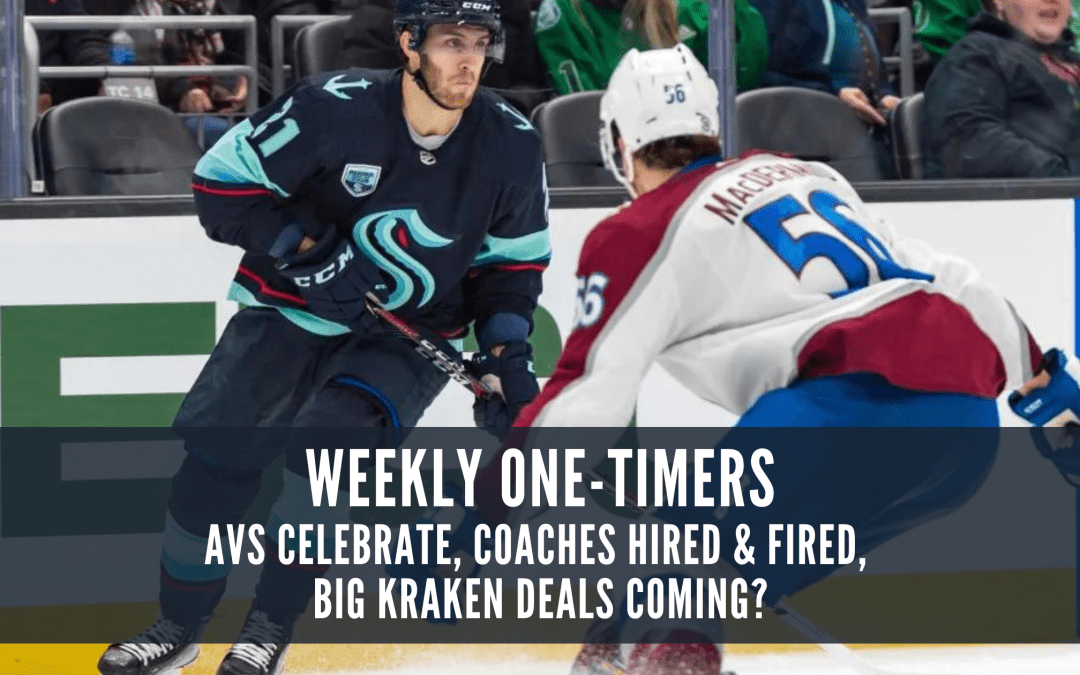 Sure, the hockey season is now officially over, but this week was anything but quiet. In this edition of Weekly One-Timers, we’ll bring you up to speed with everything you need to know from around the hockey world.

Relatively speaking, things have been quiet in Krakenland, though it feels like the calm before the storm. Yes, we do believe that big things are afoot for Seattle, which currently holds 12 picks in next week’s NHL Entry Draft, including No. 4 overall pick and four second-round picks.

Chris Johnston of TSN reported on Insider Trading that the Kraken were in on Kevin Fiala before he was moved to the Los Angeles Kings (more on that in a moment), and Pierre Lebrun has now suggested Seattle as a potential landing spot for Alex DeBrincat.

The challenge in swinging a blockbuster trade like this is that Seattle—which does have draft picks coming out of its ears—does not have much of a prospect pool yet, and surely general manager Ron Francis will not want to give up the No. 4 pick. So, what do the Kraken have that could land a DeBrincat-caliber player?

Regardless of if Francis is successful on the trade market this offseason, we do expect him to make a splash in free agency, which is also right around the corner on July 13.

The Kraken announced that they have brought back 27-year-old Swedish defenseman Gustav Olofsson on another one-year, two-way contract worth up to $750,000. Olofsson has played in the NHL before, but had his career derailed by injuries. He has recovered well at the AHL level and will be reliable for Coachella Valley in its inaugural season. Olofsson had two goals and seven assists in 41 games for the Charlotte Checkers in 2021-22.

There are few things more entertaining than the photos and videos that come out of Stanley Cup victory parades. The Colorado Avalanche held their parade on Thursday after they defeated the Tampa Bay Lightning in Game 6 of the Stanley Cup Final on Sunday.

The Avs did not disappoint. From Bowen Byram almost getting kicked out of his own parade to Nicolas Aube-Kubel beer bonging through a traffic cone to Kraken legend Kurtis MacDermid taking a digger with the Cup, Colorado exceeded expectations.

The first big trade of what could be a busy offseason around the NHL was consummated this week between the Minnesota Wild and the Los Angeles Kings. After the Wild bought out Zach Parise and Ryan Suter last summer, it was no surprise when they found themselves in a Fiala-related pickle, clearly lacking the cap space to re-sign the skilled winger.

The Kings dipped into their impressive prospect pool and sent University of Minnesota defenseman Brock Faber to his hometown team, along with the No. 19 overall pick in the draft. It’s a decent return for the Wild, thought they probably could have gotten more for an 85-point scorer, had it not been so obvious that they were in a bind.

The Kings get a highly skilled forward that can take over games. Fiala had an enormous year in Minnesota but went silent in the playoffs for the second consecutive season. He immediately re-signed with the Kings for seven years at $7.9 million per year, meaning he will be giving the Kraken fits for a long time to come.

The Sea Dogs, a stacked team in their own right, were actually eliminated from the QMJHL playoffs by Rimouski Oceanic in the first round. They automatically qualified for the Memorial Cup as the host of the tournament and had 39 days off while the other three participants battled it out to win championships in their respective leagues.

Winterton had three goals and three assists in six games for Hamilton, which came up just shy after winning an OHL championship earlier in June.

The Seattle Thunderbirds traded for the CHL rights to Brad Lambert this week, sending a fourth- and sixth-round pick in the 2023 WHL Prospects Draft to Saskatoon. If Lambert signs with Seattle, the T-Birds would also send a first rounder in 2023 and a second rounder in 2024.

This is significant because Lambert is a touted prospect, ranked No. 15 on the SOH composite Big Board. If he signs, the Thunderbirds will be even more stacked next season than they already expect to be.

Some new, some old on the NHL coaching carousel

A couple familiar faces were handed the keys to NHL teams this week, as Jim Montgomery was hired as the head coach of the Boston Bruins, and Rick Bowness was named coach of the Winnipeg Jets.

Montgomery’s hiring means Kraken assistant coach Jay Leach—who was a candidate for the Boston job—will remain with Seattle, at least for now. Montgomery was most recently an assistant under Craig Berube in St. Louis, and before that was the head coach of the Dallas Stars. His time with Dallas ended initially under mysterious circumstances, but it was eventually revealed that he had been fired due to issues related to alcohol abuse. We’re glad to see that Montgomery has gotten his life back on track and is getting another opportunity as a head coach.

Interestingly, it was Bowness who replaced Montgomery behind the Dallas bench during the 2019-20 season. Bowness led the Stars to the Stanley Cup Final that season. He stepped aside from the Stars after his team was eliminated this past season. The hiring of Bowness comes on the heels of Barry Trotz turning down an offer from the Jets.

Fun anecdote, I got locked out of Climate Pledge Arena with Derek Lalonde prior to morning skate when the Lightning visited Seattle this year. We had a nice chat. So, I can personally say he’s a very nice guy, and I’m glad he’s getting his shot with the Red Wings. Lalonde has paid his dues.

Oh, and on this topic of coaches, Bob Boughner was fired by the Sharks Friday, along with all of his assistant coaches.

Brock Boeser re-upped with the Vancouver Canucks on a three-year deal with a $6.65 million annual cap hit. It’s been a tough year for the Boeser family, who lost Brock’s dad, Duke, recently, so this is some needed great news for them. Vancouver fans are surely glad to have the sharpshooter back, as well.

Nick Paul, acquired by Tampa Bay at the trade deadline, signed a seven-year extension with the Lightning worth $3.15 million per year. Paul was an absolute warrior in the playoffs and scored five goals and four assists in 23 games. Most notably, he scored both of Tampa Bay’s goals in Game 7 of the opening round against the Maple Leafs.

Believe it or not, 41-year-old Craig Anderson will be back with Buffalo for another season, after he signed a one-year deal at a $1.5 million cap hit. The guy just keeps going. Good for him!