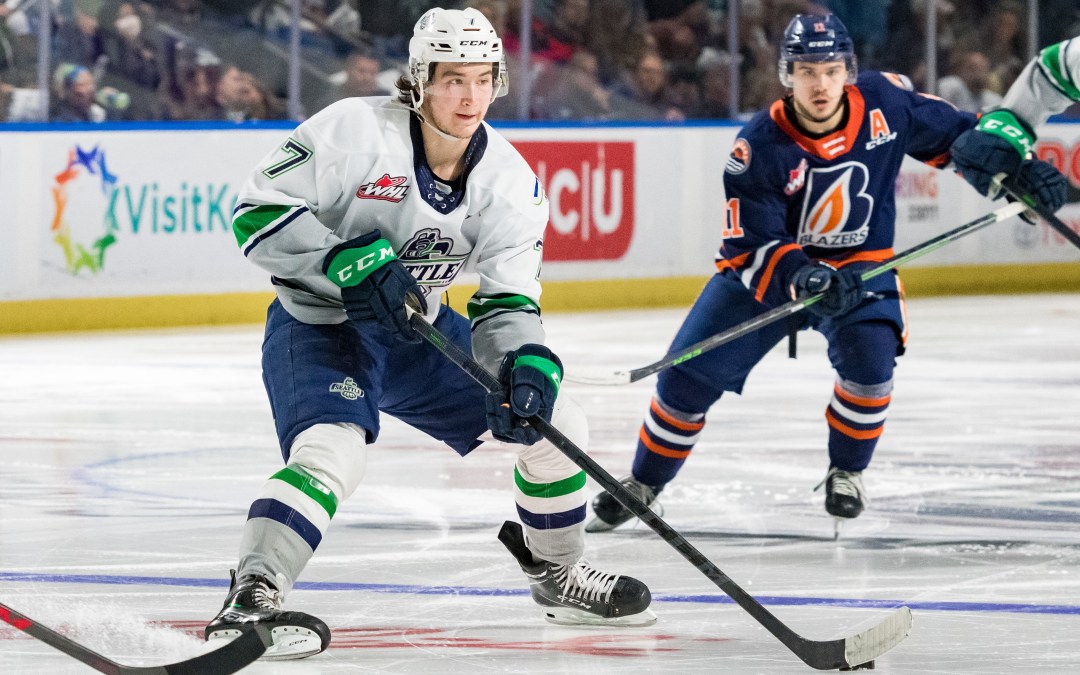 In the second period of the Seattle Thunderbirds Game 4 of the Western Conference Finals against the Kamloops Blazers, they found themselves trailing by a goal. Early in the period Seattle center Jordan Gustafson received a cross-ice pass in the right faceoff circle. He got it on his back hand and quickly moved it to his forehand, getting past a Kamloops defender and moved in on goal. Gustafson waited out New York Rangers prospect Dylan Garand and calmly flipped the puck past him. The Thunderbirds would go on to win 2-1 in overtime and for good measure Gustafson had an assist on the winner.

It’s that kind of play that makes it clear the 18-year-old, 5-foot-11 and 177-pound center will hear his name called by an NHL club in Montreal during this week’s NHL Draft.

It won’t come as a surprise since Gustafson has been on the draft radar since the preseason. Despite the added attention and scrutiny he managed to avoid a lot of the draft chatter and just focus on the game.

“It’s been super exciting just playing with our team,” Gustafson says. “We have a pretty elite team, so it’s been pretty fun playing with all the guys. We all jelled together really well. And as far as everything for the draft, I’ve been just kind of ignoring it. I try really hard to stay away from that stuff and just focus on winning hockey games as a team and it works for me.”

Gustafson was a big part of the Thunderbirds’ surprising run to the WHL Final against the Edmonton Oil Kings this spring. While they came up short, it was a fun postseason and probably made it easy to ignore online draft rankings.

He did hear from NHL scouts along the way, who are sometimes known to ask bizarre questions of prospects to get a sense of how they think.

“Probably the hardest question I had was one of the teams kind of caught me off guard and asked if I can name the last five Stanley Cup champions,” Gustafson says with a laugh. “And I did but it took me some time.”

The Thunderbirds picked Gustafson up during the 2019 WHL Bantam Draft where they selected him with the eighth overall pick in the first round. His initiation into the WHL came during the COVID-shortened season in 2021 where Seattle threw him to the wolves, getting him valuable ice time in high-leverage positions that 16-year-old rookies normally don’t get.

He was out against top lines, taking late faceoffs, on the penalty kill, and on the power play.

“Definitely built some confidence heading into the season,” he says. “Just kind of having last year to get your feet wet, see how different players on different teams play, what it’s like at this league. It was really big for me. So, it was definitely a really good first year.”

Gustafson, who is from Fort Saskatchewan, also had insight in the league before he reported. His older brother, Blake, is a defenseman for the Red Deer Rebels.

“He’s one of the biggest parts of why I’m here and playing in this league,” Jordan Gustafson says of his brother. “He’s always been that older guy for me just to kind of lean on whenever I’m going through anything hard.”

Jordan Gustafson by the numbers

Gustafson scored 23 goals with 29 assists in 58 games for Seattle this last season, which are good numbers for a player his age, but his offensive output is just one part of his game.

He plays all 200 feet of the ice, he’ll win puck battles along the boards, and go hard to the net. Gustafson plays an all-around game and perhaps some his brother’s defensive prowess has worn off on him when he plays in his own end.

“I just kind of shut my brain off and just let my instincts take over,” he says. “I’ve always put a lot of focus on all the little details in my game. I’ve always really wanted to be a complete player. I grew up with my older brother making sure that I’m always playing on the defensive side.”

At the same time, he has the offensive skill to put the puck in the net. His quick hands and instinct help on offense, and since he’ll most likely return to the WHL and to a pretty good Thunderbirds team next year, he should develop even more.

His complete game has Gustafson ranked to be picked anywhere from the mid-to-late second round or third round.

Playing all over the ice is a calling card, and here Gustafson attacks the net and gets a goal.

Gustafson has a good shot. Here he scores with a one-time slapper from the circle.

The goal against Kamloops where Gustafson displays quick hands and a nose for the net.

He doesn’t just have the slap shot, here he fires an accurate wrister for a goal.