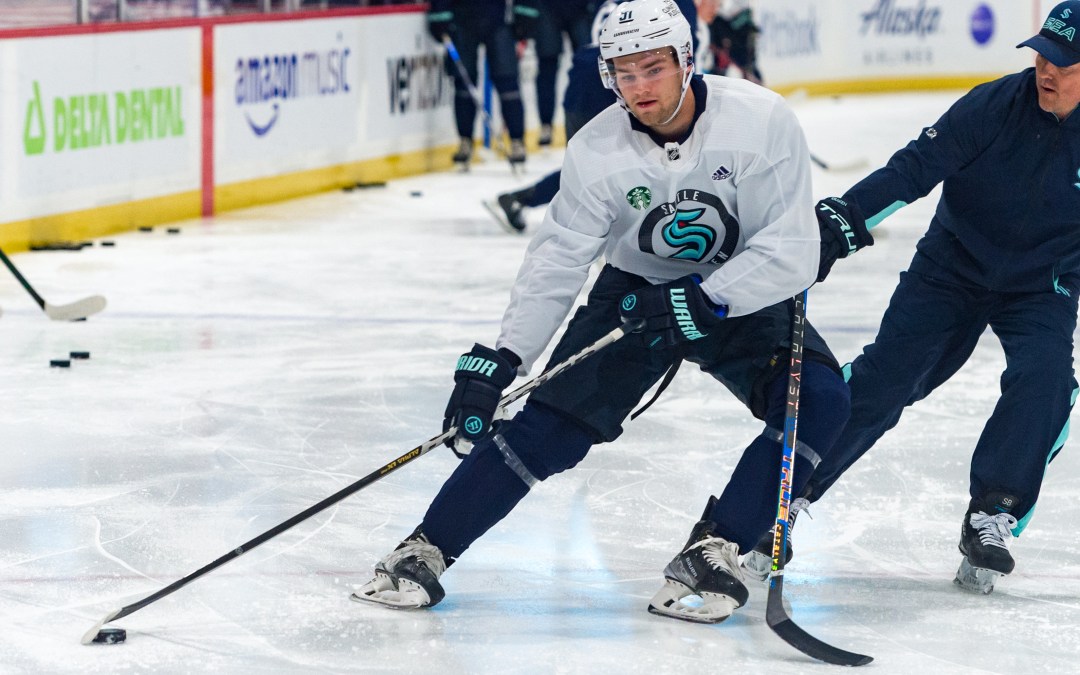 The Seattle Kraken prospects got a taste of game action Wednesday afternoon at the Kraken Community Iceplex, but the biggest moment happened immediately after.

Players were split into three sperate teams, and the one wearing light blue sweaters, which featured Shane Wright, was the winner of what was a three-on-three round robin tournament. Wright was the ultimate winner as Seattle general manager Ron Francis, moments after it was reported that he had signed Andre Burakovsky to a free-agent deal, came on the ice and announced that the Kraken were going to sign Wright to his three-year entry-level contract.

The rookie, who the Kraken selected with the fourth overall pick in last week’s NHL Draft, signed on the dotted line and then threw a fish into the crowd.

“I think [my fish throw] was all right,” Wright said after. “Hopefully, I’ll get some more practice in this year, and we can work on it a little, but it wasn’t terrible for my first time, I don’t think.”

Wright signing his first NHL contract is no surprise. It was expected that the team would look to sign him, and it’s likely that he’ll play in the league this season. That doesn’t mean it wasn’t a meaningful moment for the 18-year-old.

“It’s just another step in my journey,” Wright said. “The first step is to get drafted and next step is to sign the contract, and then the next step is to play my first game and be a regular on the team. Huge honor for me and a really exciting moment for sure.”

After two days of nothing but drills, Wright was all smiles after getting a chance to go out and play a game. Plus, his team won.

“I enjoy practice and I enjoy drills and all that, but you love playing games,” Wright said. “You love competing, you love making plays out there and competing with your teammates and against them as well. So obviously it’s one thing to do drills, but it’s another thing playing games and competing is a lot of fun. Definitely happy that we did that today.”

Matty Beniers was the only player on the ice who has played in the NHL, and it showed Wednesday. He was the best player by a good head and shoulder and had at least two goals and four assists – there was no official scoring.

While it’s not surprising, and he should be the best player on the ice, it was good to see just how much he dominated every shift he took. He scored early but also set up teammates with pinpoint and creative passes.

Wright looked commanding as well, and while he did not score a goal, he created chances all day. His highlight was a full-length, 100-foot stretch pass right to the stick of Luke Henman, who would score a goal.

If he had scored a goal it would have been the play of the game, but Firkus, picked 35th overall by the Kraken in Montreal, got one of the biggest rounds of oohs and ahhhs from the crowd. First he slid the puck through a defender’s legs to create room. He picked the puck back up and tried to go between his legs for a shot on goal, only to be denied by goalie Niklas Kokko.

Overall, Firkus was noticeable throughout the game in creating a number of scoring chances.

Seattle fourth-round pick, Robertson, had a strong scrimmage with some strong moves to the net and scored a couple of goals. He scored 41 goals last season with the Ontario Hockey League’s Peterborough Petes.