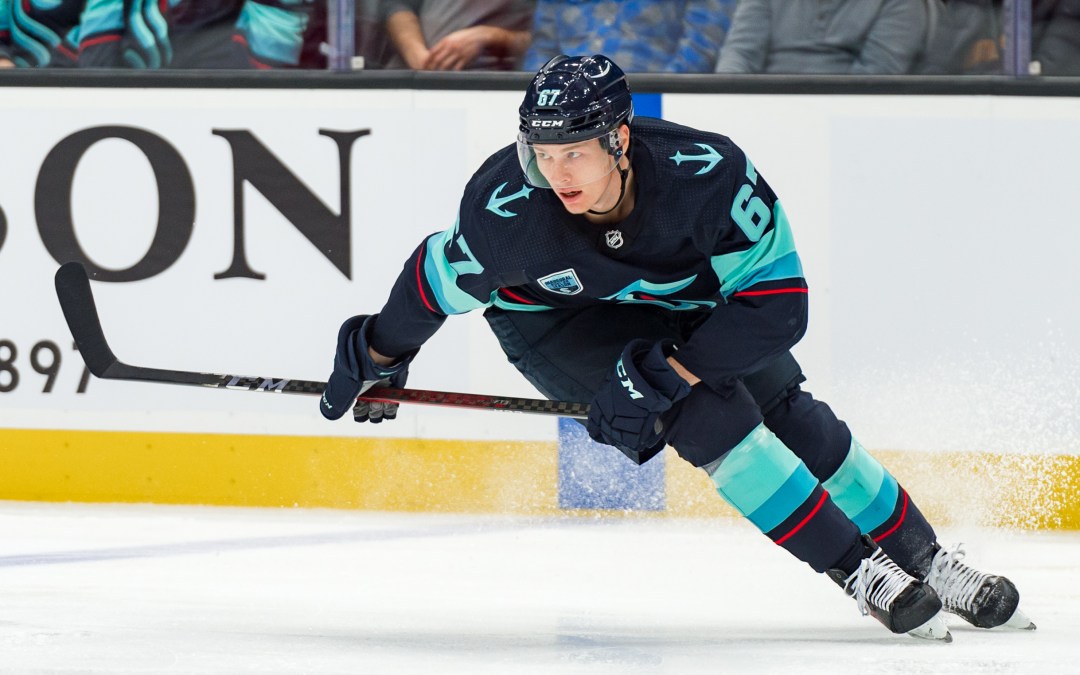 On Sunday afternoon, the Seattle Kraken agreed to terms with two players on one-year deals: 24-year-old forward Morgan Geekie and 31-year-old defenseman Michal Kempny. Let’s dive into our first reactions on the players, the contracts, and projected roles for the 2022-23 season.

The more notable of the two Kraken signings on Sunday, restricted free agent Morgan Geekie agreed to a one-year, $1.4 million contract. The deal is a “one-way” contract, meaning that Geekie is guaranteed to earn that sum even if he spends time in the AHL this year.

An original Kraken re-ups with the team

The right-shot forward most frequently centered the team’s fourth line. When he played higher in the lineup, he would at times shift out to right wing. Geekie averaged just 11:10 of even-strength ice time per game, which is the lowest figure in the Kraken’s forward group for any player who appeared in more than ten games. He regularly appeared on Seattle’s second power play unit, averaging another 1:21 in ice time per game on the man advantage. He did not factor into the penalty killing units.

Geekie played last season on a one-year, $750,000 contract. He had signed that deal as a restricted free agent with the Carolina Hurricanes just a few days before the July 21, 2021, Expansion Draft. At the time he was coming off a 2019-20 season that saw him in and out of the Carolina lineup and registering just nine points in 36 games.

Seattle’s decision to take Geekie from the Hurricanes in the Expansion Draft came as a surprise to most prognosticators who had linked the Kraken to defenseman Jake Bean. Among Carolina’s exposed forwards, Nino Niederreiter, an established-but-more-expensive top-six forward, was more commonly referenced as an option.

Instead, Ron Francis tabbed the player he had previously selected with a 2017 third-round pick when he was general manager of the Hurricanes. Clearly, the team saw something in Geekie last summer. By its actions on Sunday, the team continues to project confidence in the player today, rewarding him with a $650,000 raise over his previous year’s salary.

Geekie has a profile that an NHL front office might design in a lab. He brings a coveted right shot and size (6-foot-2) to the center position. He delivers value in the face-off circle (he won 53 percent of his draws in 2021-22) and frequently wins on the forecheck, recovering possession for his team in the corners.

Beyond those traits, Geekie has shown a skill-oriented offensive game. He frequently demonstrates the vision and touch to deliver accurate passes that set up his teammates for scoring chances. And his shot has shown flashes of brilliance.

Put it all together at 24 years old, and this sounds like a player any team should want in their lineup for the next decade.

The problem is that Geekie’s obvious tools have not yet coalesced into a top-nine forward in the NHL, even on a Kraken team that struggled to generate offense in 2021-22. Indeed, it seems like weeks can go by without any notable contribution from Seattle’s No. 67. To be fair, he is on the ice less than most.

Geekie did well with this contract

The answer begins with leverage. For the first time, Geekie was eligible for salary arbitration this offseason. This means that if he and the team could not agree to terms, Geekie had the right to ask a third-party arbitrator to step in and decide the dollar value of the deal. Ultimately, Geekie exercised this right, and a hearing had been set for August 11, but the new deal cancels that hearing. This leverage factors into Geekie’s increased compensation.

Even so, how does Geekie’s deal stack up against comparable arbitration-eligible players? The answer is: quite favorably for the player.

I utilized an approach similar to my analysis of Jared McCann’s contract. I used CapFriendly to gather historical contract information for comparable arbitration-eligible restricted free agents who signed one-year contracts. I then adjusted those contract values into 2022 cap dollars. (Check out my piece on Jared McCann for a more thorough explanation on my method.)

As an arbitration-eligible restricted free agent, Geekie secured a one-year, $1.4 million contract on a resume of 111 games played and 35 scoring points. The most recent comparable, Washington’s own Dylan Gambrell, secured a one-year, $1.1 million AAV with the Sharks last offseason on the strength of 110 games played and 23 points. Geekie’s point production has been almost 50 percent stronger on a point-per-game basis, though Gambrell’s defensive game may be better suited to a long-term fourth-line role.

All told, from Geekie’s perspective, a $1.4 million contract is a strong result. Evolving Hockey predicted that if Geekie signed a one-year contract it would be worth $941,400 AAV. The comparable contracts described above indicate that an arbitration award for Geekie may have projected into the $1 million – $1.125 million AAV range, with the chance of coming in lower than that, but little precedent for a higher result.

Thinking from the team’s perspective, it is tempting to dismiss a $300,000 “overpay”—if that’s what it is—as inconsequential in comparison with some of the bigger salary cap hits on the roster. But with the Kraken close to the cap now, every dollar is meaningful, and, as described further below, the implications for future contract negotiations could be significant. On the other hand, if Geekie breaks out as a top-nine player, this contract will be worth every dime.

Geekie projects to again start as the center on the fourth line, though he’ll face camp competition from John Hayden and Andrew Poturalski. Geekie’s avenue to moving higher in the lineup is likely on the right side where only Jordan Eberle and Oliver Bjorkstrand necessarily fall ahead of him. (Andre Burakovsky can line up on the right wing or the left wing.)

Looking forward to next summer, the Kraken will be faced with the decision of whether to make Geekie a $1.4 million qualifying offer, given the arbitration risk that could lead to a significantly higher salary. If Geekie becomes a top-nine forward, this is a price the Kraken—or another team—would happily pay. But, absent a surge in Geekie’s performance, the qualifying offer could be deemed too costly and cause the team to non-tender the forward, similar to the situation with Ryan Donato this year.

All of this sets up the most important season of Geekie’s NHL career. He has an opportunity, with a team that believes in him, to convert his skills into production. If he cannot, he may find himself on the open market next summer waiting for a team willing to “take a flyer” on a skilled player in his mid-20’s who hasn’t broken through.

Later on Sunday the team also signed Michal Kempny, a 31-year-old left-shot defenseman, to a one-year, one-way, $750,000 contract. The Czech blueliner has several years of NHL experience, breaking into the league with the Chicago Blackhawks during the 2016-17 season and then logging time with the Washington Capitals over the last five seasons.

Kempny won the Stanley Cup with Washington in 2017-18, then notched a career-high 25 points in 2018-19 before tearing his left hamstring at the end of that season. He rehabbed and followed that up with 18 points in the shortened 2019-20 season. Since then, Kempny has missed more time with more major injuries, also to his left leg, and has not been able to re-establish himself as a blue line fixture in the NHL. He missed almost all of the 2020-21 season, first recovering from a torn achilles and then suffering an MCL sprain in a freak accident in which a member of the ice crew fell on him during a rehab stint in Hershey in the AHL. He was able to get back on the ice last year, but split time between the Capitals and the Hershey Bears, registering minimal offensive production.

Kempny projects as a depth player who would be most useful to the Seattle Kraken as injury insurance in Coachella Valley. If he proves he is fully healthy, it is not out of the question that he could spend significant time with Seattle, though, perhaps as the seventh defenseman on the roster.

This looks like a shrewd, low-risk bet on a player that was productive when he was healthy.

What do you think about these signings? Let us know in the comments below or reach out to us on Twitter.