With their newly acquired talent, how will the Seattle Kraken line up in 2022-23? 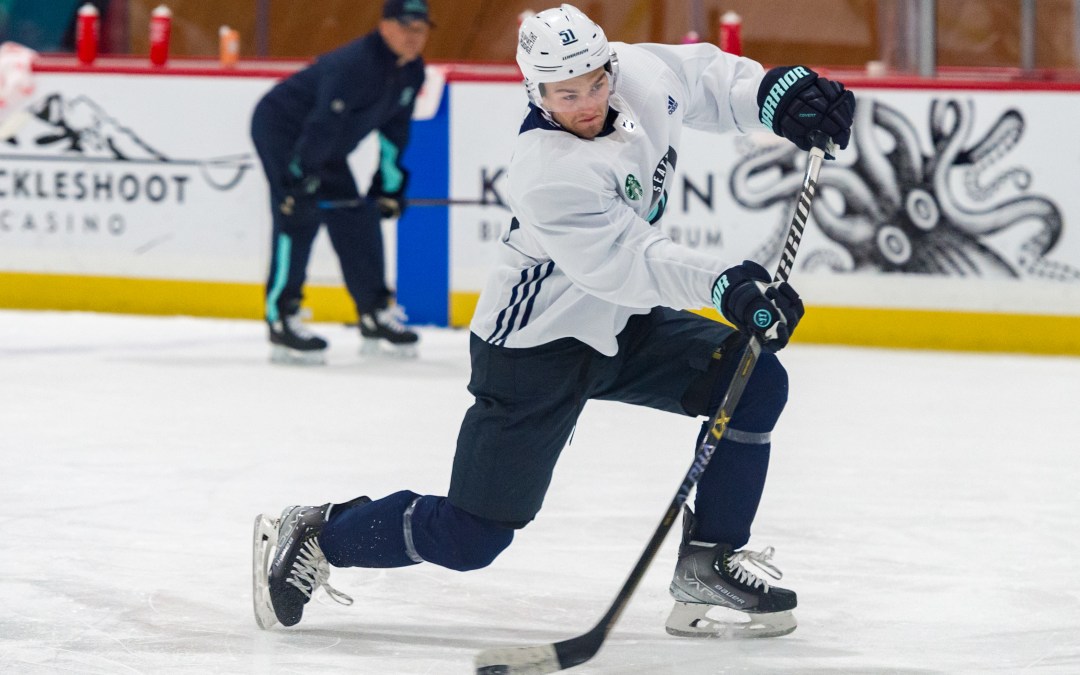 The Seattle Kraken have made some shrewd moves this offseason. They are not a Stanley Cup contender at this stage, but we do think they have improved themselves enough to at least be in the playoff conversation come March. Of course, we should caveat that we thought they would be in the hunt in 2021-22, and they instead never came close. Nonetheless, we like what general manager Ron Francis has done this summer, and with the dust mostly settled, we thought now would be a good time to start playing with some way-too-early possible line combinations. So, without further ado, let’s take a look at a few possibilities for the lines that could be deployed by coach Dave Hakstol for the Seattle Kraken this season.

When considering how the Kraken might line up this season, there are some true unknowns that make this a slightly more challenging exercise. The biggest wild card is No. 4 overall draft pick Shane Wright. He projects as a first- or second-line center down the road, and putting him between skilled veterans could be the play to help him get to that level more quickly. But we have no idea how he will look in the NHL after jumping from the OHL at just 18 years old.

Wright could burst onto the scene like Matty Beniers did during his brief stint at the end of last season, or he could get off to a slow start that lands him in more of a checking role. Heck, he could go back to the OHL’s Kingston Frontenacs after nine games (the limit for Seattle to avoid burning the first year of Wright’s entry-level contract), which would render this whole conversation moot. We’re going to err on the side of optimism and say he sticks with the Kraken.

We suspect Wright’s usage will impact Yanni Gourde. Gourde is traditionally a center as well, so assuming Hakstol keeps Beniers and Alex Wennberg in the middle—we would not move either of those players to the wing—that means one of Wright or Gourde would have to move. That is also assuming one of the two doesn’t get buried in a fourth-line role, but playing either in that capacity would not make sense, at least in the traditional sense. What’s intriguing is that if Wright sticks with the Kraken all season and contributes, Seattle will have four bona fide centers who all deserve to play on the third line or higher. That’s a good problem to have.

The thing about line combinations is that they change constantly. Every coach swaps players in and out of the lineup, moves guys into different roles depending on matchups, and manipulates combinations to try to find trios that will win games. Lines can change by the minute during a game, and a couple losses in a row could cause even the most prolific of lines to be broken up. So, even if we hit the nail on the head for the open night lineup in Anaheim, there’s a good chance it will look different the following night in Los Angeles.

An exercise like this also assumes good health for the team. We know Brandon Tanev and Jaden Schwartz are coming off major injuries, and we don’t know if there will be lingering effects for either of those players this season.

Finally, we don’t know how guys like Olver Bjorkstrand and Andre Burakovsky will fit in. Burakovsky surely benefitted from playing on the best team in the league last season in Colorado, while Bjorkstrand has only known the Columbus Blue Jackets in his seven years in the NHL. How those skilled players will jell with the Kraken remains to be seen.

Here are two options for the Kraken top line. First, let’s roll with Beniers centering the two top-six newcomers in Burakovsky and Bjorkstrand. Beniers and Bjorkstrand are two skilled playmakers who can also put the puck in the net, and Burakovsky brings a wicked shot and scoring touch. Let Bjorkstrand and Beniers fly around and wreak havoc, and let Burakovsky find a quiet spot on the ice to hopefully replicate (or improve upon) his 22 goals from last season. The wingers also represent a quality veteran presence to help the young Beniers, though Matty didn’t seem to need any assistance in his short NHL stint to close last season. Killer B’s anyone?

The other option we like up top is Beniers centering Jared McCann and Jordan Eberle. Beniers and Eberle showed chemistry last season, and this keeps intact the “veteran presence” surrounding Beniers.

Either way, let’s get Matty plenty of first-line minutes this season.

These combos would mean Burakovsky plays on the third line, which seems like a bit of a stretch, but if that happens, Hakstol would effectively be rolling three productive forward lines. That wouldn’t be a bad scenario for the Kraken.

For some reason, we think Shane Wright and Yanni Gourde playing together on Seattle’s third line is destiny. Gourde elevates the game of seemingly every linemate he plays with, so why not trot him out there with the 18-year-old rookie? If we’re penciling them in together, that means we just need to figure out who the other wing would be. We’re thinking Schwartz or Burakovsky, depending on what happens in the top six.

Assuming good health, there will likely be another carousel of players swapping in and out of the fourth line this season. The Kraken are deep with depth players, and guys like Ryan Donato, Morgan Geekie, and Joonas Donskoi are all bound to see some time in the press box on nights when everyone is available.

A fourth line that features the hard-forechecking stylings of both Brandon Tanev and Karson Kuhlman will leave every defender in the league checking his six when retrieving pucks behind the net. Hakstol loves those players, so we expect them to each be in the lineup most nights. As for who would be the pivot between those two, Geekie is the most natural center, but Donato and Donskoi will command plenty of time. So, perhaps there is a world in which Gourde or Wright spends time in a pseudo-fourth-line role, with guys like Donato and/or Donskoi rotating in and Tanev and Kuhlman shuttling back and forth to the third line.

There’s a little less intrigue in the defense pairs, since handedness tends to dictate where individuals lineup, so let’s just go with this:

Offseason acquisition Michal Kempny will provide some competition in camp and depth on the left side, while Cale Fleury will challenge Borgen on the right.

In trying to determine who will play where in 2022-23, one thing that really struck us was that this roster is deeper than what Seattle had to start the team’s inaugural season. The additions of Burakovsky and Bjorkstrand and the emergences of Beniers and (hopefully) Wright mean that players who were more or less guaranteed to play in the top six last season may not play in the same roles this year. Having veteran skill on the team’s third and perhaps even fourth line is a luxury that did not exist previously.

Let us know in the comments how you would set your Kraken lineup.