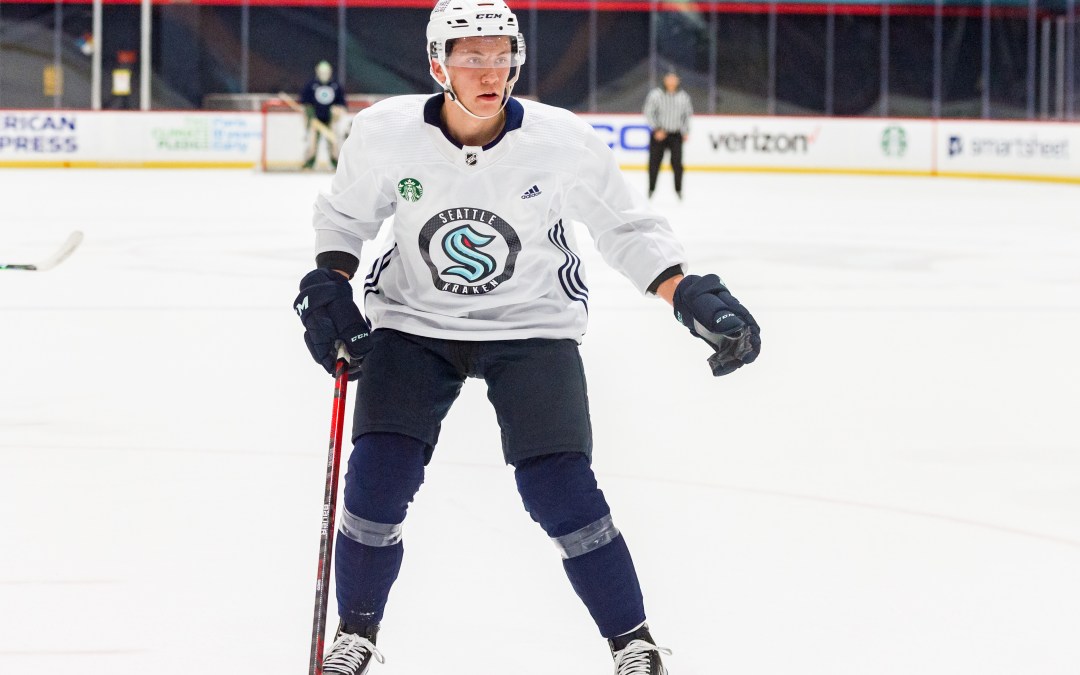 The Seattle Kraken open their second-ever training camp on Thursday, so Monday at the Kraken Community Iceplex, the day belonged to the future as the team’s first rookie camp got underway.

On the ice were most of Seattle’s prospects including Matty Beniers and Shane Wright. The one notable absence was 2021 third-round draft pick Ryan Winterton who is recovering from an injury he sustained last spring. The Kraken confirmed that Winterton would not be joining training camp this season.

Most of the rookies on the ice will be sent back to their amateur clubs for further development or to the American Hockey League’s Coachella Valley Firebirds. The on-ice session was led by Firebirds head coach Dan Bylsma to gain some familiarity with his future charges.

One rookie who has an outside shot of opening on the Kraken roster is defenseman Ryker Evans. Selected in the second round of the 2021 NHL Entry Draft, Evans is coming off a superb season with the Western Hockey League’s Regina Pats. In 63 games with Regina, the almost-21-year-old scored 14 goals, 47 assists and 61 points.

“Had a bigger role with the team,” Evans said of his final year in junior hockey. “It was a lot more fun. I got more reps, and it allowed me to work on my game, allowed that to develop. Going into my last year was mostly just me playing for that contract and allowing me to show my skills and all that kind of stuff. It was a big weight lifted off my shoulders last season.”

That relief came in April when the Kraken signed him to an entry-level contract.

At the end of last year, he was sent to Charlotte as the Checkers prepared for the Calder Cup playoffs. He did not appear in any games but got to practice and get a taste of what the pro hockey lifestyle was about.

This summer, the focus turned to preparing for a strong show at Kraken camp.

“My goal is always to come in here and prove myself as to why I belong on the team and how I can help,” Evans said. “So, now it’s just time to show it and that was my preparation throughout the summer.”

Evans says he worked on his shot – he emphasized that he always works on his shot – as well as strength and patience with the puck to allow him to create space. Among the throng of rookies Monday, he was noticeable, although the day was mostly saved for drills and no real scrimmages.

It’s the second training camp for Evans who was also at the summer’s development camp. The familiarity has been helpful.

“It’s a lot easier this year,” Evans said. “I know a lot of the staff and the people here so it’s a lot more comforting to come in here and I kind of know the routine.”

What is a first for Evans is how long the summer lasted. The WHL is already in its preseason games, and in the past he would have already begun training camp.

Evans said this summer was the first time in six years he stayed at home this late. His father runs a skills camp in Calgary which allowed him to get on the ice.

One treat this summer for Evans was being able to see the Stanley Cup. His family has long been friendly with Cale Makar’s family, and they all celebrated Makar’s day at home with the Cup he won with the Colorado Avalanche. The big question was whether Evans touched it.

“No, I can’t do that,” he said, following the tradition of not touching hockey’s biggest prize until you win it.

Whether he cracks the Seattle roster or starts in the AHL, this will be a big transitional year for Evans. No longer will he live with a billet family in junior hockey where his meals are prepared for him. This year he will be a professional hockey player on his own.

“It’s exciting,” he said. “You kind of gotta grow up pretty quick. But no, it’ll be fun. I know how to cook breakfast and like chicken and rice, but that’s about it.”

Ryker, along with his chicken and rice, will be a player to watch as the preseason progresses. He’ll get plenty of time to show his skills and prove he’s ready. Will he do it?

Both of Seattle’s top young centers were on the ice Monday and found themselves head to head on more than a few occasions, especially during one-on-one drills. Wright showed off some defensive prowess by knocking the puck loose from Beniers on consecutive chances.

“It’s fun to have him out here,” Beniers said. “Because after practice he’s always wanting to work on stuff, and we bounce off each other with ideas and he just likes to have fun. He likes to work hard and think I’m kind of the same way, so it works.”

Beniers looked ready on Monday, skating with poise and putting his skill on display. He says that he’s added 10-12 pounds of muscle this season to better prepare him for what will be a tough first full pro season.

“I think it’ll be a lot tougher this year,” he said. “And you gotta be ready for it. Hopefully, it’s not as bad, not as tough as it sounds.”

Mystery goalie and the circus is back in town

Kraken second-round pick Jagger Firkus is back in camp after a strong showing in the summer development camp. The sparkplug is always worth keeping an eye on, and it’s expected that he will get playing time in the preseason games that are coming up.

He’s off to a good start scoring goals, having been in training camp with the WHL Moose Jaw Warriors. Firkus has already played in two preseason games with Moose Jaw, recording three goals and five points in two games.

In goal Monday was a goalie wearing No. 1 with no name plate. There is no such goalie on the roster, and there was speculation as to who he was. Even members of the Kraken communication team were not sure who the mystery goalie was. The prevailing rumor going around was that the Kraken didn’t have enough rookie goalies available for camp so they grabbed a guy who plays recreational hockey locally.