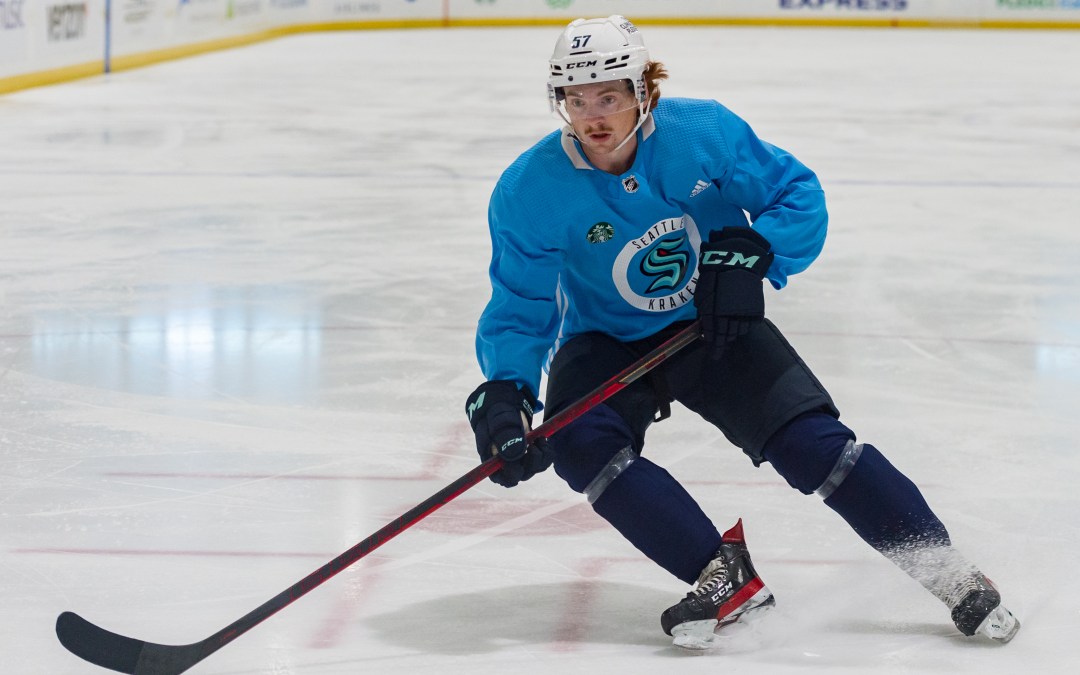 SEATTLE — The Kraken’s future was back on the ice Tuesday at the Kraken Community Iceplex for Day 2 of rookie camp. The rookies will get a day off Wednesday before the full team kicks off the club’s second-ever training camp on Thursday.

Seattle’s 2022 second-round pick Jagger Firkus is back in Seattle, and while he knows he most likely won’t make the NHL roster this season, he’s soaking up the atmosphere and everything that NHL camp has to offer.

“I feel more confident, that’s for sure,” he said. “Any time coming down to camp you always go back with more confidence. I think that’s one big thing I took away from development camp and just kind of learned from what the staff and what other people who are trying to teach me and I think I did a good job.”

Firkus is an entertaining player who was nicknamed the “Firkus Circus” for his flashy play and goals scored in junior hockey with the Moose Jaw Warriors of the Western Hockey League.

Though he was in Seattle at the Kraken practice facility this summer, the newness and eliteness of the building is still something that he is getting used to.

“Every time I see it, it catches me off guard,” he said of the facility. “And the staff here. They’re all unbelievable. They just want to help you and support you. It’s really good to be a prospect and know that everyone at the next level is willing to help you and willing to support you to get [there].”

Firkus will eventually be returned to Moose Jaw for what should be a good season for him. He’s coming off a 36-goal, 80-point season which resulted in him being drafted. Not only will he be better, but he’s a year older and with NHL camp experience.

He’ll benefit from playing on a strong Moose Jaw team with good players such as 2023 NHL Draft prospect Braden Yager. On Tuesday Moose Jaw opened as 10th on the CHL initial rankings – the Seattle Thunderbirds were ranked third.

“It’s a very exciting team, a really deep team, a really tight team,” Firkus said of the Warriors. “We have a good coaching staff. We want to win at all costs and I think that’s kind of what we’re going into this season with.”

For now, Firkus will head into the main Kraken camp and test his skills against the veteran NHL players on the roster. He may even get into one of the team’s preseason games next week. Then he’ll head back to junior and look for a deep playoff run.

All the while, he’ll keep improving and keep getting stronger – he says that he’s weighing in at 158 pounds, which is a couple of pounds above where he was at the draft.

“I just want to prove that I got better throughout the months that I wasn’t here,” Firkus said. “ I think I’ve had a good camp so far. So hopefully moving forward, I can keep getting better and better.”

Shane Wright’s quest for the NHL is underway

Seattle’s top draft pick in 2022 is looking to crack the lineup at 18 and play NHL hockey this season. He’ll see a jump in the competition on Thursday when the full team is on the ice for training camp.

He’s been in town a few days and took part in the unofficial captain’s skates with a number of the vets already.

Wright said he increased his workout intensity this summer knowing he’d be attending an NHL training camp with a shot at making the roster.

One advantage that Wright has is a Kraken roster with a number of players who made the NHL at a young age and have been through what he’s about to attempt. That includes players like Jared McCann, who played in the NHL at 19, and Adam Larsson, who like Wright was the fourth overall pick and played in the NHL at 18 the following season.

“There are a lot of guys on the team that have numerous years of experience in the NHL and have been there, done that with almost anything that has to do in the NHL,” Wright said. “ Anytime you can brush shoulders and talk to guys like that and pick their brains, it’s pretty cool. For me, having guys like that to talk to is pretty cool.”

If there was a theme for Tuesday’s camp it was to compete.

The team started with a possession drill where four players, two-on-two, would play in a small area on the ice and try to carry the puck over a red line at each end. It was cramped quarters and required skill in passing and skating.

There was a bit of controversy as Wright appeared to get the puck over the line, but a late back checker looked to knock it off his stick. Matty Beniers gestured that it didn’t count but he was overruled by the coaches.

Later in the day, the players split into two teams and formed a semi-circle around the goal. They took turns skating in on goal in an attempt to score. The winning team – in this case the team in the white jerseys – won, meaning the blue team had to do push-ups on the ice.