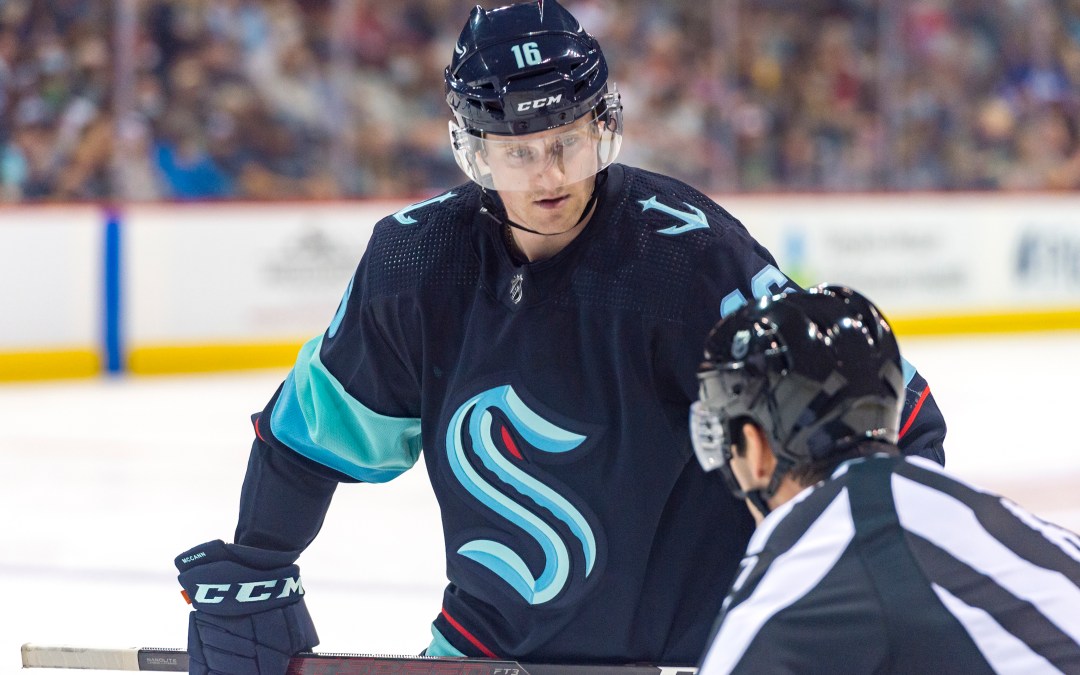 With a new contract and now a new number, Kraken forward Jared McCann is excited for a new season.

McCann switched from the number 16 he wore last season to number 19, which he wore in junior hockey with the Soo Greyhounds and in the NHL with the Pittsburgh Penguins.

He says there’s no superstition behind it, it’s just a number he’s always liked, and with last year’s trade of Calle Jarnkrok — who wore it last season — the number was up for grabs.

“Favorite number since I was a kid,” he said Friday after coming off the ice at the Kraken Community Iceplex for Day 2 of training camp. “When it came available, I just thought ‘you know what, I want to go back to my roots,’ and so I picked it.”

Like many of Seattle’s returning players, McCann says the vibe around the team is different this season with the core knowing each other, the city, and the system already.

“I feel good, feel comfortable,” McCann said. “But still trying to show the coaching staff that they made the right decision. I’m gonna work as hard as I can every day.”

The decision in question was the Kraken pulling the trigger on extending McCann’s contract midway through last season. He was taken in the Expansion Draft from the Toronto Maple Leafs and was scheduled to be a restricted free agent this summer.

But he turned in a career season and led the Kraken in scoring while setting personal highs in goals (27), assists (23), and points (50). The team rewarded him by locking up the 26-year-old for five more years at $5 million a year.

Those numbers bring along with them some high expectations to repeat the season he just turned in.

“Everybody says I’ve got a lot of pressure, but I put the most pressure on myself,” McCann said. “I know, sometimes I gotta ease up a little bit on myself because I know I can do it. I know I can be a good player.”

It’s early in camp, but after two days, McCann played on a line with Yanni Gourde at center and Jordan Eberle on the opposite wing. That line looked good, but it’s too soon to say if it will stay intact through the start of the season. Still, don’t be surprised if the trio gets a run in a preseason game or two.

McCann and Gourde didn’t play together much last season, but did connect toward the end.

“I think 10 games, we had some really good success together,” McCann said. “So [Kraken coach Dave Hakstol] liked what he saw so we’re just gonna try to keep it going.”

The line performed well in Thursday’s scrimmage and Friday during drills.

After shifts they could be seen conversing on the bench, talking about how best to attack on the next go around.

“He is a fast skater, he’s got a tremendous shot and it’s really fun to play with him.” Gourde said. “He does the right plays everywhere on the ice. It’s really nice to play with a guy like that and we’ve got to find some chemistry and a little bit of a routine to help each other out on the ice but so far, it’s been fun.”

Whether he remains on the training camp line or ends up playing with other guys, McCann should slot into the Kraken’s top six this year.

McCann played center for most of last season, although he moved to the wing near the end, including during his stint on Gourde’s line.

He’s back on the wing so far in camp and doesn’t seem to have any center envy.

“I’m comfortable wherever,” McCann said. “I got some open looks playing with Yanni. He’s a great player and creates a lot of space, especially getting pucks back on the forecheck. We work well together.”

There are expectations that McCann will be in the top six, and it’s a unit of forwards that is suddenly a lot deeper and skilled after offseason moves that brought in Andre Burakovsky via free agency and a trade with Columbus that netted Oliver Bjorkstrand.

For the players this summer, watching their team add on was motivating.

“We made some great, great moves this offseason,” McCann said. “And obviously we got Bjorkstrand in a trade that was a steal. We signed Burakovsky and he’s won two Stanley Cups. We’ve got a couple other guys too. We’re very excited to go.”

The temperature was turned up at training camp Friday. Not the actual temperature; the rink was still cold all throughout the day. But Hakstol amped up the physical plays. There were numerous drills designed to create puck battles along the wall, and there was hitting.

It’s something the coach wants the team to improve.

“That’s one area of competitiveness of our entire group, and we can raise that level,” Hakstol said. “Part of that happens in training camp. You’re always respectful of your teammates, and you want to make sure that you’re being intelligent and smart about it the first couple days of camp for sure. But, that’s one focal area, to continue to raise the physical competitiveness as a group.”

It was an early scrimmage that’s ultimately meaningless, but the Kraken rookie came up big in the afternoon’s finale.

Wright’s Team White was clinging to a late 1-0 lead when the Blue squad pulled goalie Philipp Grubauer for the extra skater and tied the game with just over a minute left.

In the waning seconds, Jaden Schwartz stole a Blue outlet attempt and slid the puck to his right onto a speeding Wright’s stick. Wright took a couple of strides and fired a top-shelf wrist shot that eluded Grubauer and gave Team White the win with about 20 seconds left on the clock.

“It’s pretty cool, obviously, even if it’s just a little game like that,” Wright said. “You want to win and to be able to score and help my team win is pretty cool. So yeah, I felt really good.”

Wright is attempting to prove that he’s ready for the NHL at 18 and had a good showing on Friday. Scoring a dramatic, scrimmage-winning goal doesn’t earn him a spot, but it went a long way towards showing he belongs.

“That’s the play that a lot of people will remember about the scrimmage today,” Hakstol said. “I remember a whole lot more. His practice today was competitive. He was physically strong and competitive. He continued to play with good pace.”

Being able to stay with the NHL pace and show a physical strength will ultimately dictate where Wright plays this season.

If he can handle it, he’ll play the full season with the Kraken rather than be sent back to the Ontario Hockey League. In his first game-like atmosphere, he looked the part.

“It really felt like I was moving well, like I was competing, making plays out there,” Wright said. “It was definitely a lot faster than the captain’s skates and more of a game situation for us too. But overall, really a lot of fun and I think I did pretty well.”