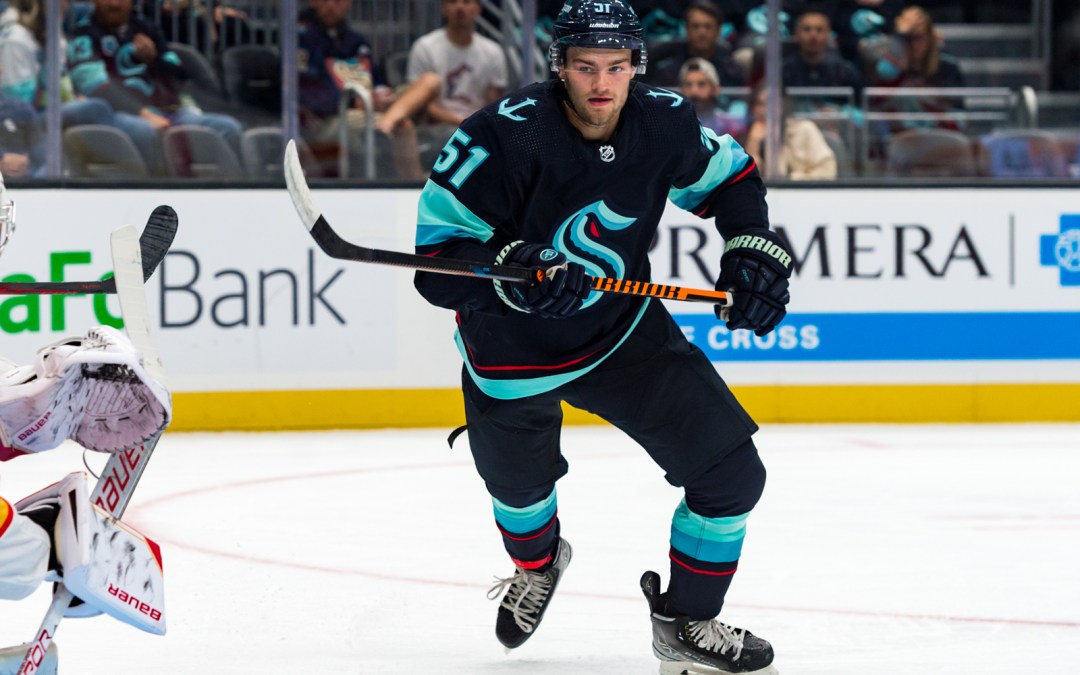 Don’t look now, but your Seattle Kraken are 2-0 in the preseason. Take the success with a grain of salt, though, because A.) the preseason means nothing, and B.) Seattle has not yet faced any real competition. Tuesday’s matchup against the Flames had a similar feel to Monday’s game against the Oilers in that both opponents left most of their regulars at home. What was different, though, was literally all of the Kraken personnel, as Seattle was able to ice a full new roster from the night before with a nice mix of veterans and guys fighting to make an impression.

Jaden Schwartz returned and scored a beautiful short-handed goal, Daniel Sprong found the back of the net with one of his patented “Sprong bombs,” and Philipp Grubauer and Magnus Hellberg combined for the team’s second consecutive shutout. But the story of the night was undoubtedly No. 4 overall pick Shane Wright making his preseason debut.

So, let’s start with that, shall we? Here are our Three Takeaways from a second consecutive 3-0 Kraken win.

Shane Wright has looked good in training camp to this point, but it’s so hard to form real opinions from watching practices. Where the rubber really meets the road is in game action, and for his first time out Tuesday, we thought he belonged.

After the game, the touted 18-year-old was jovial and visibly excited to have seen his first NHL action. “It was a lot of fun,” Wright said. “Definitely a pretty cool experience there, something I’ve been looking forward to for basically my entire life here, so it’s definitely a lot of fun. It took a little adjustment at first and throughout the game there, but obviously, great win, and I feel really happy with the overall result.” Wright said the speed of the game was the biggest difference from the OHL, and that was what pushed him to adjust.

Hakstol seemed generally pleased with the rookie’s debut performance as well. “I thought he played a simple, hard game,” Hakstol said. “He did a pretty good job with his two linemates [Jordan Eberle and Jaden Schwartz].”

Wright had three shots on goal and pulled another backhander just wide of the post in the first period. His best looks came on the power play, including one laser snap shot from the right face-off dot that almost beat Dan Vladar and created a juicy rebound opportunity for Eberle.

As an aside, we would like to see Wright switch sides on the power play with Jared McCann, so that the two wingers can play their off-hand wings and be open for one-timers, but that’s not a critique on Wright. Even on his strong side, he still was a key piece of a power play unit that created plenty of chances. It’s a good all-around start.

A few days ago, we asked Hakstol about Sprong and what he needs to show in camp, and Hakstol said the Dutch forward has an opportunity to force the team to make some hard decisions. That’s because Sprong—a veteran forward with a heavy shot and good speed—is not currently signed to a contract and does not have a spot on the roster. Instead, he’s on a professional try-out, which means it is anything but a sure thing he’ll land with the Kraken or even the Coachella Valley Firebirds.

But, we’ve thought Sprong has looked good in every game situation he’s faced so far, and he showed off his blistering shot again Tuesday, giving Seattle a 1-0 lead at 12:30 of the second. Vince Dunn laid a nice pass into the slot for Sprong, who one-timed it by Vladar before he could even wave at it.

Our belief is that despite scoring six goals in his 16 games with Seattle last season, Sprong played himself out of favor with a lack of defensive responsibility. So, we asked Hakstol about him again after Tuesday’s game, and interestingly, the coach heaped high praise on the winger. “For me, it’s not the goal,” Hakstol said. “I know he can score in this league; I know he can do that, and that’s not easy. I’m not diminishing that in any way, but I thought he played his ass off tonight. He played hard, and that’s what we want him to keep doing. He’s done that every day. He’s just got to continue to do that in all three zones.”

The problem for Sprong is that even if he continues to shine in training camp, there isn’t an obvious roster spot for him if everyone remains healthy. Would Seattle consider signing him to a low-risk, relatively low-dollar contract? Would Sprong take something like that?

Sprong remains a storyline worth monitoring for the rest of camp.

Takeaway #3: The goalies are unflappable

Just like everything else in preseason, it’s hard to know how much stock to put in goaltending performances. It’s especially confusing on nights like Monday and Tuesday, when Edmonton and Calgary each trotted out a lot of players that appear destined for the AHL and elsewhere. Still, after a nightmarish inaugural season in the crease, it sure is refreshing to see all four Kraken goalies combine to pitch consecutive shutouts over a 24-hour period.

On Tuesday, Philipp Grubauer looked calm, cool, and collected for the first half, though he wasn’t tested all that often and only faced 10 shots before giving way to Magnus Hellberg. Hellberg had tougher stops to make, but he did make them all and looked great doing so in his stunning Brian’s setup.

“Both nights we got good, solid performances,” Hakstol said. “A couple good saves at the right time along the way. I thought [Grubauer] tonight just had a real good, solid night, and you know, that’s what we want to see.”

Wouldn’t it be great if Grubauer can put last season fully behind him and get off to a hot start?

One last thing. Game Ops played another teaser video about the mascot release, which is coming before Saturday’s game. Mayor Bruce Harrell was in the video and hinted that the mascot should relate to a Seattle landmark, so we’re going on record and predicting the mascot will be some sort of lovable troll character that’s based on the Fremont Troll.